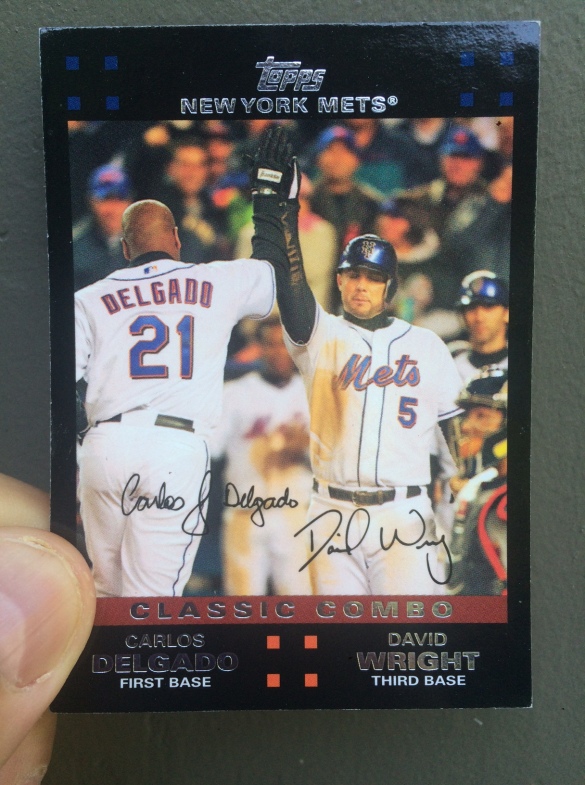 I dug up this card with Carlos Delgado and David Wright from 2007. I already wrote about Delgado, but it seemed appropriate that Wright is paired with someone in a card.

Wright is best as a supporter instead of a lead. As a baseball player, David Wright is Dan Aykroyd, and I say that with all due respect to them both.

Both Wright and Aykroyd are respected, and have the talent and aura of being a star. But both shine brightest when surrounded by stars rather than carrying the load on their own.

And both saw their career trajectories dip when they were not surrounded by the right supporting cast.

Dan Aykroyd’s early career seemed like he was a comedy super star. But really, think of his successes. On the original Saturday Night Live, he was probably the most talented pure actor, and got the most out of each sketches. His main talent seemed to be getting the most out of his co-stars. Whether it was being a Wild and Crazy Guy with Steve Martin, or a Conehead, or whichever character he played, he worked perfectly in the ensemble as John Belushi, Chevy Chase and Bill Murray broke out to stardom.
Columbia PicturesColumbia Pictures

When did Belushi’s star shine brighter than when teamed with Aykroyd on the screen and on records as The Blues Brothers? Which Bill Murray vehicle is more iconic than the Aykroyd written Ghostbusters? And in that film, the best lines (including the “Dickless” exchange) were set up by Aykroyd and brought home by Murray.

And while Eddie Murphy exploded onto the scene with 48 Hours, it was when he starred opposite Aykroyd in Trading Places that his comedic genius was cemented.

Aykroyd made his presence known in many comedy classics, but never had to carry one on his own.

Likewise, when teamed with hitters like Carlos Beltran, Carlos Delgado and Jose Reyes, David Wright put up big numbers and shone. He won his Gold Gloves and Silver Sluggers, was a legit MVP candidate and looked like he was the durable superstar the Mets were searching for.

Essentially, Wright was going to be their answer to Derek Jeter.

But when the supporting cast around him weakened and he was asked to carry the load of leading the team, the Mets slipped into irrelevancy. Wright’s durability went away as he spent more time on the disabled list. His numbers took an alarming dip. And since the Mets arrived in CitiField as Wright’s squad, they have yet to finish at .500, let alone be a legit contender.

Sure he had the terrific World Baseball Classic that earned Wright the nickname “Captain America.” But nobody cares about the World Baseball Classic. They are spring training games. And his dramatic game-winning home run defeated the Italian team. Seriously. The baseball power house of Italy was his great conquest.
David WrightWilliam Perlman/The Star-Ledger

Wright got hurt and sat out the final games of the WBC, as Team USA was eliminated. Once again, he played best with stars surrounding him.

Yes, Wright will be at the top of most of the Mets’ records by the time his career his done. But when Jeter sets Yankee records, he passes names like Gehrig and DiMaggio and Ruth. When Wright became the All-Time Mets hit leader, he passed Ed Kranepool. See the difference? It is subtle.

He could never carry the franchise when he was dubbed the captain, but Wright will be paid like a team leader until 2020 (with money deferred until 2025.)

Likewise, when Aykroyd took the lead in movies, the results were not pretty. Dr. Detroit should have warned us that asking him to carry a film was going to be an uphill battle. When the likes of My Stepmother is an Alien and Dragnet disappointed, we should have gotten the message loud and clear.

His directorial debut, Nothing But Trouble, was a notorious disaster. The Coneheads movie is almost unwatchable, save for a charming Chris Farley performance. His starring role in the S & M comedy Exit to Eden is cringe-worthy at best, and run-screaming-from-the-room at worst.

And to drive the point home, Aykroyd attempted to recreate the magic of The Blues Brothers on his own without Belushi. The result was Blues Brothers 2000, one of the worst studio films made in the last few decades and the movie that basically ended John Landis’ career in Hollywood.

The fact that Ghostbusters 3 has never been made is a wonderful gift to film-goers everywhere, especially in the wake of Harold Ramis’ death.

Now this is not to say that Dan Aykroyd is without talent. He is still quite capable in an ensemble cast. Put Aykroyd in Grosse Point Blank or Behind the Candleabra in a supporting role and he will shine. He was practically the lone highlight in 2001’s Pearl Harbor, a dramatic role which he played to perfection.

In 1989, Aykroyd received an Academy Award nomination as Best Supporting Actor in Driving Miss Daisy. He was marvelous in that film, but he did not have to do the heavy lifting. It was Jessica Tandy and Morgan Freeman who carried that film.

And likewise, Wright had a terrific 2012 when he stayed healthy, and finished 6th in the MVP vote despite playing for a non-contending Mets squad.

Yes he had his great individual moments with a big NLCS game in 2015 and a World Series homer. But in the end, he was not the October star. He was a supporting player.

This can not be stressed enough. I am both a fan of David Wright and Dan Aykroyd. They are both talented and should be beloved. But if you disagree with what I am saying, ask yourself these two questions:

Which season did David Wright carry the Mets to greatness?
What is your favorite Dan Aykoyd star vehicle?

An earlier version of this post was written for The Scoop Sports in 2014.