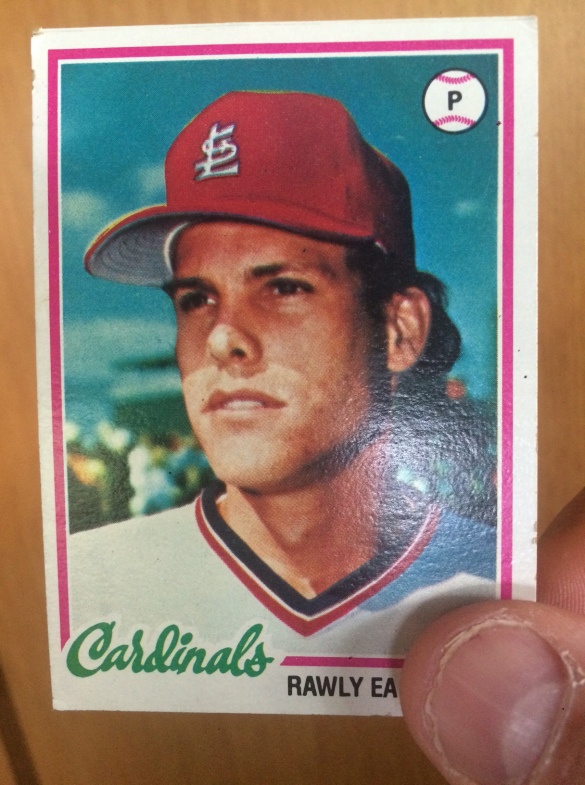 In 1975, the Cincinnati Reds had a bullpen for the ages. Clay Carroll, Pedro Borbon and Wil McEneaney all gave manager Sparky Anderson unbelievable depth.

It was rookie Rawley Eastwick who led the league in saves and was the nominal closer.

By 1977 that bullpen was totally dismantled.

It is kind of humbling.

The wonderfully named Rawlins Jackson Eastwick was born in New Jersey and selected by the Reds in the 1969 draft. While Carroll and the rest of the big league squad were becoming regular participants in the playoffs, Eastwick was struggling in the minors. In 1971, he began working with coach Brooks Lawrence who taught him a slider. Eastwick’s confidence was restored after some prolonged slumped and the organization realized he was best suited for relief. He began to progress through the farm.

By 1974 he made the club and in 1975, after a quick trip to the minors, he was an anchor in the Reds bullpen as a rookie. He was a master at painting the corners and by July was unhittable.

From July 2 to the end of the 1975 season, Eastwick posted a 1.15 ERA and saved 20 games. The Reds coasted to the Division title and had the best win loss record for any National League team that decade.

He pitched 3 shutout innings to save game 2 of the NLCS. Manager Sparky Anderson gave Eastwick a chance to close out the pennant in Game 3 but he blew the save in the 9th. The Reds rallied in extra innings, giving Eastwick the win but it was Pedro Borbon who got the save.

In the World Series, he was the pitcher of record in Games 2 and 3, going 2-0. To be fair, he blew another save in the World Series, allowing a game tying homer to Dwight Evans in Game 2. After saving Game 5, he was brought into a tough situation in the classic Game 6.

Entering the game in the 8th with the Reds up 6-3, Eastwick faced the tough Boston lineup with 2 on and nobody out. He retired the next two batters but Bernie Carbo launched a dramatic game tying homer to straight away centerfield. It was his third blown save of the post season. In the end, the Reds won Game 7 with Will McEneaney closing out the finale.

In 1976, Eastwick was the Rolaids Fireman of the Year, once again leading the league in saves. In the postseason he got another win based on a blown save and did not appear in the World Series. Again, McEneaney saved the finale against the Yankees.

The Big Red Machine wobbled in 1977. Pete Rose was gone and the pitching staff was being dismantled. Eastwick got into a contract squabble with the front office and by mid season was sent packing to the Cardinals for Doug Capilla. The result was this awkwardly airbrushed hat on his Topps card.

McEneaney, Carroll and Gary Nolan were also gone from the staff by then. Borbon would last until midway through the 1979 season before he was shipped off.

In 1978, Eastwick signed a million dollar deal to join a crowded Yankees bullpen that already included Rich Gossage and Sparky Lyle. In the end there was not enough room for him on the team and he was dealt to the Phillies, where he made his final post season appearance.

After bouncing around between the Royals and Cubs, he called it quits after 1981.

How fast things in baseball can change. A young World Champion bullpen dominated baseball for 2 seasons and was quickly broken up. Could they have won more if they stuck together?

I DO know that if they did, Eastwick would have picked up a few more wins based on his blown saves.