Gift Ngoepe (pronounced Ngoepe) could open new potential talent in Africa for the future. Meanwhile ESPN’s influence on baseball was great but could be done. And I cover the 1981 Reds, another team that should have won.

It is a world wide episode of Sully Baseball.

END_OF_DOCUMENT_TOKEN_TO_BE_REPLACED 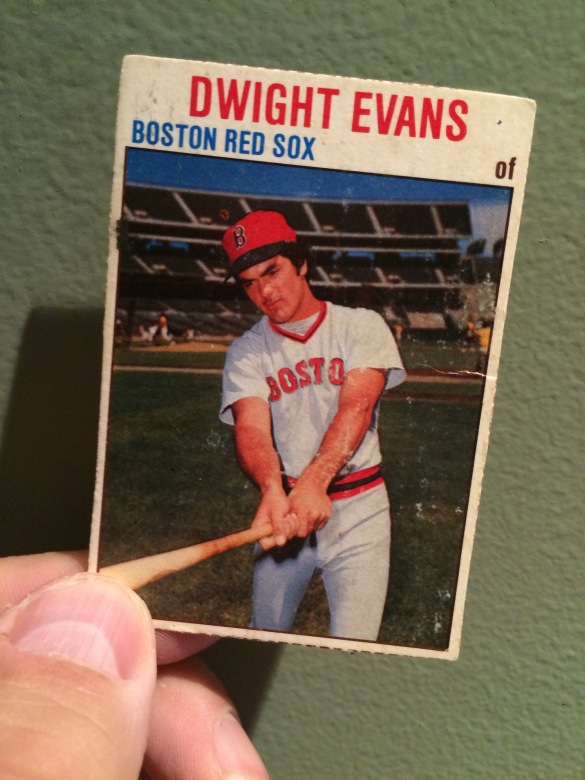 Remember Hostess baseball cards? On the bottom of the boxes of Twinkees and Cup Cakes and Big Wheels, there would be three baseball cards.

My brother and I would check the bottom of the boxes before my mother bought them to try and find a player we liked. Evidently sometime in 1979, we found a box with Dwight Evans.

After plowing through the Twinkees, we would bust out the scissors and cut out the card and add it to the pile.

I remember once I was trying to trade baseball cards with some kids who lived near my grandparents in Connecticut. I enthusiastically told them I had a Thurman Munson card which they coveted. When I revealed it was a Hostess card, I was rebuffed.

“We mean a REAL baseball card” I was told. I was incredulous. Don’t tell me a Hostess card is not a real card!

Of course they are real.

It is still in this shoebox, so clearly it is real.

Dwight Evans had a wonderful career and one that might very well eventually get him into the Hall of Fame if a Veterans Committee looks at his numbers with a modern set of eyes.

The California native emerged with the Red Sox along with Carlton Fisk and just a few seasons before his teammates Jim Rice and Fred Lynn would join him in the greatest homegrown outfield in modern baseball history.

Lynn was the flashiest player and Rice was the more feared slugger. But it was Evans who had the most complete and consistent game year in and year out. The best defensive outfielder in the American League, Evans had a cannon that no base runner would dare challenge.

In the 1975 World Series he showed off his power, with a game tying 9th inning homer in Game 2 and his glove. In the top of the 11th with a runner on, Joe Morgan launched a shot to right field. It was clearly going to be at least a double and possibly a homer. Either way, the Reds were about to take the lead and be 3 outs away from a title.

But Evans made a leaping grab to snag the ball. And then for good measure threw back to the infield to double off Ken Griffey Senior who was trying to score.

Throughout the late 1970’s and all the 1980’s, Evans quietly was one of baseball’s most consistent sluggers. In the strike shortened 1981 season, he tied for the league lead in homers and had the highest OPS in the league. In 1982, his on base percentage led the AL and three times led the league in walks. He was a slugger getting 20 to 30 homers a year while driving in runs and walking at an eye popping rate and playing stellar defense.

He would have been one of the most coveted players in baseball today. In his day he was a solid, respected player but only sporadically thought of as elite.

After a few more stellar and somewhat under the radar seasons, he was unceremoniously dumped by the Red Sox to make room for Jack Clark after the 1990 ALCS. He played his final year with the Orioles in 1991.

A Red Sox Hall of Famer and to this day a fan favorite, Evans is part of an agonizing “What If.”

If the Red Sox got that final out in the 1986 World Series, a lot would have been different in Boston history. Jim Rice would have been elected on the first ballot instead of the 15th. The narrative would have been “They didn’t win with Yaz or Ted but they won with Jim.”

Evans would have been swept into the riptide as a valuable contributor to a Red Sox title. And maybe with a little more scrutiny to his career, he could have survived on the ballot long enough for the advanced metrics supporters to make a compelling case for his Hall of Fame inclusion.

I wonder which one of us cut out this card.

One thing I do know… it is a REAL card.