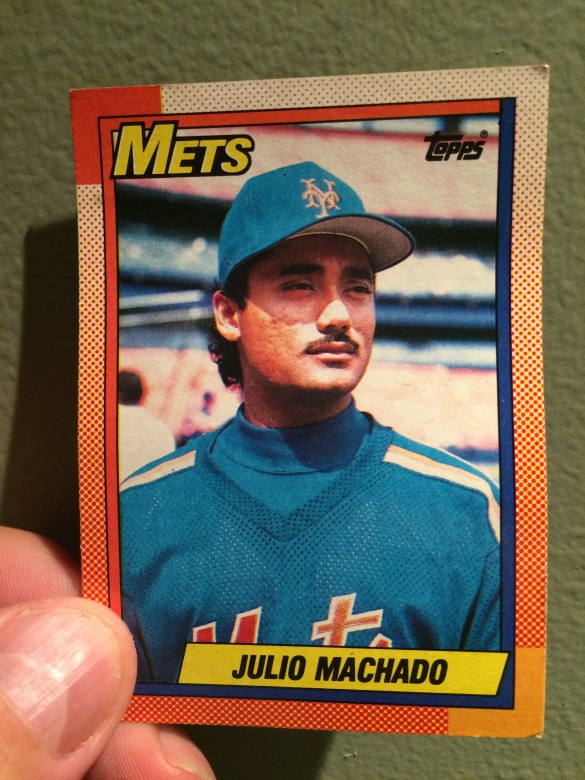 The 1989 Mets were a very strange team. I have written about them several times in these baseball card posts. But just a few years removed from the 1986 World Series title and months after their frustrating 1988 NLCS defeat, the Mets decided to remake the team.

The Mets appeared to be moving away from the wild partying hell raising squad and wanted a more predictable bunch.

It was also the year that Julio Machado arrived. He was a pitcher who ate iguanas and was later convicted of murder in his home in Venzuela.

He was a teenager in the Phillies organization but did not make much of an impact. In fact before the 1989 season, while still in the minors, he was cut after several uninspiring seasons. The Mets picked up and put him in their farm system. He had the best season of his professional career and by September, was called up to the minors.

His first game was a blow out win against the Cardinals. Frank Viola and Jeff Musselman were the other pitchers that day. Viola was the big midseason pickup and Musselman was what the Mets got in exchange for Mookie Wilson.

And “The Iguana Man” closed out the game.

Reportedly he was called The Iguana Man because he loved the taste of the reptile.  When Mets broadcaster Bob Murphy was told it tastes like chicken, he responded “then he won’t mind if I order the chicken.”

The Mets faded out that September and fell short of the Cubs in the NL East race. Machado pitched to a 3.27 ERA over 10 games.

In 1990, the Mets makeover continued as Davey Johnson was fired and Keith Hernandez and Gary Carter found employment elsewhere. Machado became a mop up man in the bullpen until he was sent packing to Milwaukee in a deal for Charlie O’Brien. He pitched quite well to finish the season in Milwaukee and was an effective pitcher in 1991 for the Brew Crew.

As the team looked forward to competing in 1992, the 26 year old Machado looked like he was going to be a key part of the bullpen. But on December 8, 1991, he was involved in an auto accident in Venezuela.

There he fatally shot a woman… like you do. He then went missing, which isn’t suspicious at all. The Brewers thought they had a middle reliever. Instead they had a fugitive. Needless to say Milwaukee made other plans.

He turned himself in, claimed he shot her in self defense and was sentences to 12 years in prison.

Eventually he was paroled and is a coach in a Venezuelan league the evidently does not have issues with convicted killers.