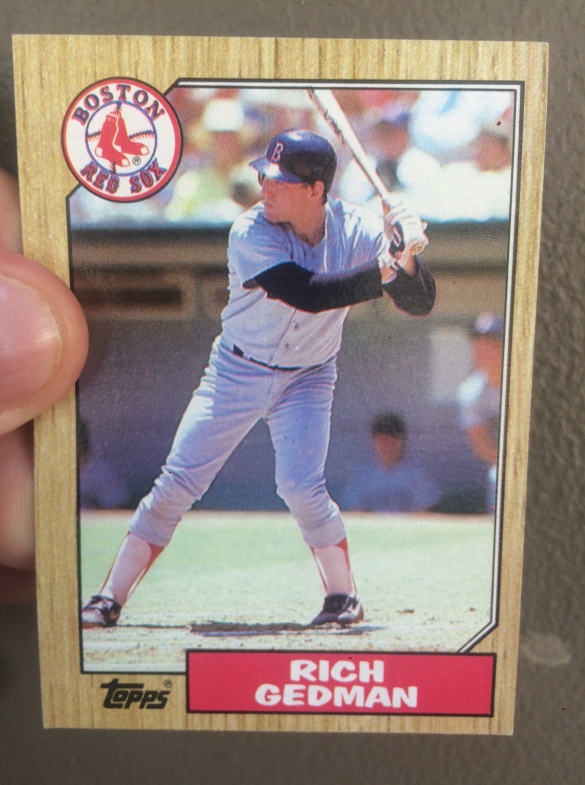 I often talk about what I call “The Rule of Seven” on the podcast. I may have mentioned it on one of these baseball card posts. You will have to forgive me. I intend to write 365 of these bad boys this year and I will probably repeat a point.

The Rule of Seven basically goes like this: Most people make their first memories following a sports team around the time they are 7 years old. Some freaks develop memories sooner, others are late bloomers.

But seven seems like a pretty solid time frame. Ask most people who their first favorite player was or first favorite team and chances are they will respond to someone or some team from the time they were seven.

I was seven in 1979. That means I was too young to remember the 1975 World Series. It happened during my lifetime, but I was 3 and chewing on my Batman action figure.

So for the first 13 years of my life, I had no memories of a Red Sox team that played in October. Red Sox post season failures were an academic abstraction.

In 1986, at age 14, the last full year my family lived in Massachusetts, the Red Sox finally made it to the post season.

Among everything else, I was thrilled that I could watch a post season where players I had emotional investments in. And I remember the sensation of knowing this team, that I followed so closely, would be the kind of team I could tell my kids about as MY guys.

And for some reason Rich Gedman became a special member of the team. Actually it wasn’t hard to figure out. Geddy was one of us! A native of Worcester, it was as if a Red Sox fan was allowed to put on the catcher’s gear and play.

He made his debut late in 1980 and filled in for good in 1981, shortly after a front office blunder allowed another Native New Englander catcher, Carlton Fisk, to skedaddle to Chicago.

Gedman’s solid 1981 season earned him Rookie Player of the Year honors from The Sporting News. His numbers dipped in 1983, but he hit .294 in 223 plate appearances. Then in 1984, he clubbed a career high 24 homers. The next year he batted .295 with 18 homers, earning his first trip to the All Star Game.

In 1986, he caught Roger Clemens’ 20 strikeout game and in a game in Detroit in August, came off the bench to hit a go ahead grand slam off Willie Hernandez to give the Red Sox a dramatic win. Geddy was a Boston favorite with his helicopter swing and thick Massachusetts accent.

Oil Can Boyd leaped into his arms when the Red Sox won the Division and your pal Sully finally had a playoff team.

My first foray into October looked like it was going to be short and sweet. The Red Sox lost 3 of the first 4 games of the ALCS to the Angels and Game 4 was a massive collapse sure to be remembered in Red Sox history.

Game 5 of the ALCS has been known as the Dave Henderson game. But it could have been called the Rich Gedman game. He homered off of Mike Witt early in the game and would pick up 4 hits along the way.

In fact it was the specter of how well Rich Gedman was hitting off of Witt that caused Angels manager Gene Mauch to make one of the worst managerial decisions in baseball history.

With the score 5-4, 2 outs and nobody on, pitcher Mike Witt was on the verge of his second complete game of the ALCS and was a lock to win the MVP for the series.

He had allowed a 2 run homer to Don Baylor earlier in the inning to cut the lead to 1, but after retiring Dwight Evans, only Gedman stood between the Angels and the World Series.

After Gedman was Dave Henderson, who started the day on the bench.

Mauch took out Witt with 8 2/3 innings under his belt and brought in Gary Lucas. Now Lucas wasn’t a bad pitcher but with the Angels on the verge of their first ever pennant, the margin of error for the Red Sox was non existent. Sure Gedman could have got a hit. Then go after Henderson.

Lucas threw one pitch. It hit Rich Gedman. He went on base as the tying run. Then with 2 strikes on him, Dave Henderson homered off of Donnie Moore. Who would have been a better pitcher in that scenario? Donnie Moore or Mike Witt?

As it turned out the Red Sox took the lead on Henderson’s homer and the Red Sox let the Angels tie it in the 9th.

In the World Series, he had his ups and downs. The biggest down was letting Bob Stanley’s pitch get away from him with 2 strikes and 2 outs in the bottom of the 10th of Game 6. Most people who blame Bill Buckner for the World Series forget the game was already tied when the ball went between his legs.

Was it Stanley’s wild pitch or Gedman’s passed ball? In the end does it matter?

He homered in Game 7 but also was struck out to end a potential rally.

Gedman’s contract ran out after the World Series and he became a victim of collusion as no team would sign him.

I remember thinking that Gedman’s potential defection would be my first experience of losing a beloved World Series player. The A’s looked like an idea fit for him.

But as nobody signed him, Sox fans waited for his May 1st return to the team. What we didn’t know was an injury he sustained in the off season got his season off to the wrong foot.

Gedman’s post playing career involved coaching and managing all around New England, both in the Red Sox organization and Independent Ball. He talks in his thick accent about the Red Sox as if he is still on the team. Presently he is on the Pawtucket coaching staff for the Sox AAA club, working he way back to Fenway.