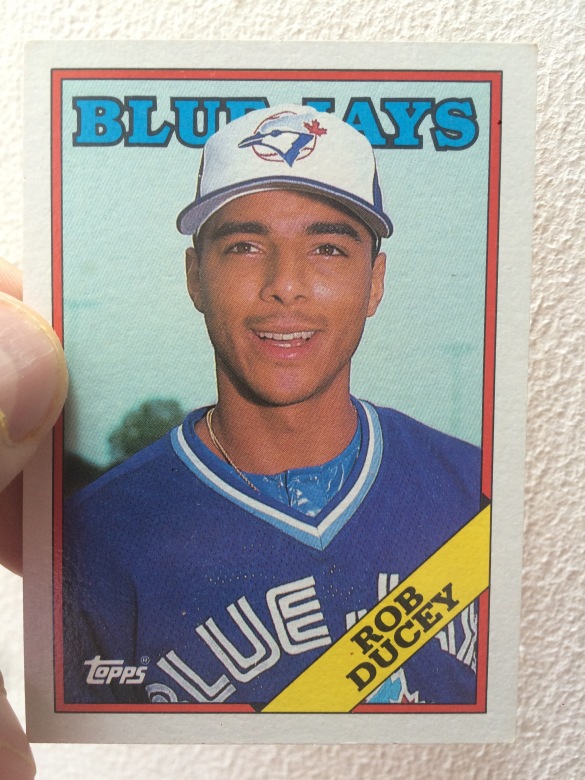 In the mid 1980’s, the Toronto Blue Jays had the best outfield in baseball. George Bell was an MVP. Lloyd Moseby was the dynamic centerfielder. Jesse Barfield could win the batting title and had the best throwing arm of anyone not named Dwight Evans in right.

They also seemed to have an unlimited galaxy of stars coming up through their farm system to supplant that magical 3. Junior Felix, Sil Campusano, Glenallen Hill and Mark Whiten all were tearing up the minor leaguers with images of the youngest and most athletic outfield in the game dancing in Toronto fans heads.

But no name seemed to be more destined to be beloved in Toronto more than Rob Ducey. He had 20 homer power, 20 stolen base speed, hit for a high average and legged out doubles and triples. The biggest factor for his potential stardom however had less to do with his stats and more to do with his lineage:

Rob Ducey was Canadian. And not only that, but he was born in Toronto.

The idea of a Canadian superstar on a Canadian team was worthy of drool in the Toronto front office. A hometown kid done good on the Blue Jays? Just try and keep those uniforms on the rack!

In 1984, the 19 year old Ducey was signed by the Blue Jays as an undrafted free agent after playing for a Community College in Florida.

By 1986, he was one of the shining stars in the system, tearing up the Carolina League and the Southern League, leap frogging to AA. In 1987 he hit well enough in AAA to get a few cameos on the big league roster.

After 1987, the Blue Jays seemed resigned that the Bell, Moseby and Barfield outfield wasn’t going to last forever and looked to within for replacements. Campusano and Ducey got the biggest looks.

Ducey hit well in short spurts in both 1988 and 1990 but could not break the starting lineup, going back and forth from AAA to Toronto.

When the Blue Jays did a massive turnover of talent after falling short in the 1990 Division Race, Ducey remained and got another shot. But his 1991 performance did not merit a starting job. He did manage his first post season appearance in the ALCS that year, but at age 26, his time to be a regular was running out.

After a poor start in 1992,he was traded to the Angels for reliever Mark Eichhorn. It was Eichhorn who managed to be on a Toronto World Series winner while Ducey, the Canadian kid, languished in Anaheim.

Between 1993 and 1996, he played for the Rangers, Oklahoma City and the Nippon Ham Fighters of the Japanese League. Returning to America in 1997, he played for the Mariners and got his second and final post season appearance. 1999 saw him join the Phillies, be traded to the Blue Jays and then back to the Phillies only to land in Montreal in 2001. The Canadian kid played for both Canadian teams. After a stint of independent ball in 2002 and playing for Team Canada in the 2004 Olympics, he called it a career.

After his playing days ended, he has been a scout or organizational coach for the Yankees, Blue Jays, Rays and Phillies.

In 2013, he was elected to the Canadian Sports Hall of Fame. He may not have been the heir to Bell, Moseby and Barfield, but he was a baseball lifer who experienced a lot and for Canadian Baseball, that is salute worthy.