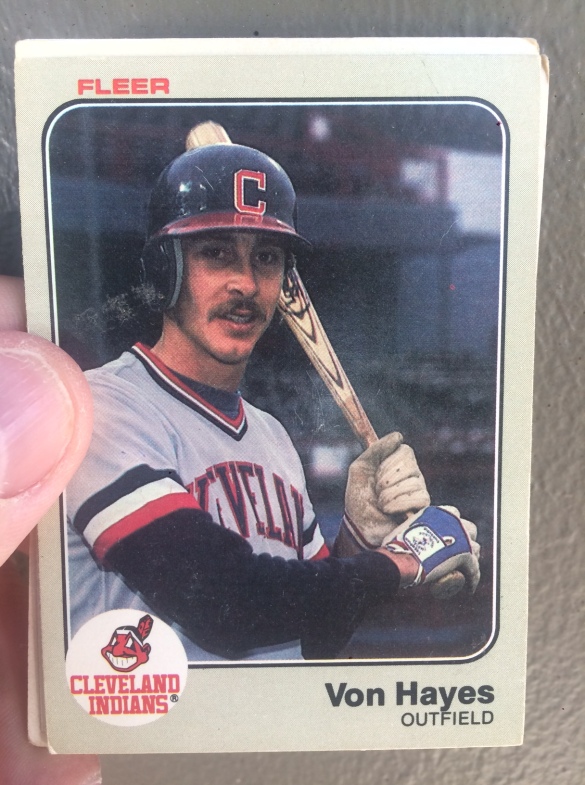 Von Hayes had a very strange career. He had a nice career and had success. But he always seemed to be more successful than he actually was and kept popping up in strange games and moments that seemed to be relics of the 1980’s.

The Cleveland Indians picked Hayes in the 7th round of the 1979 draft out of St. Mary’s College in Moraga, California.

In 1982, when this relatively normal picture for the 1983 Fleer series was taken, he was having a good rookie year, at least by the way players were evaluated in the 1980’s.

He had decent power (14 homers and 25 doubles), good stolen base numbers (he stole 32 bags) and drove in 82 runs. The 23 year old finished 7th in the Rookie of the Year vote and looked like a promising part of the Indians future.

Now modern eyes see that he didn’t walk much, his OPS was a mediocre 91 and he was caught stealing 13 times. For those of you who love WAR, he had a 2.9 WAR. I have no idea if that is good or not.

Well, the Indians decided Hayes was at his peak value at that nano second and decided to get a lot for Hayes.

The Phillies, who fell short of the post season after a disappointing 1982, came calling. Future batting champ Julio Franco was thrown into a deal. So was former Phillies playoff hero Manny Trillo. So was catcher Jerry Willard. So was fourth outfielder and member of the 1980 World Champions George Vuckovich. So was reliever Jay Baller.

Yup, the Indians flipped one pretty good but not great season from Von Hayes into 5 players. Folks, THAT is a relic of the 1980’s in two stages. The overvaluing of stolen bases and the 5 for 1 deal, which I am guessing ZERO GM’s would pull off now.

As a platoon outfielder, Hayes hit OK but not great for the Phillies. He stole 20 bases but was caught 12 times. That is a horrific percentage but nobody thought of that then.

Hayes played in the NLCS and World Series for the NL Champion Phillies, going hitless in 5 at bats against the Dodgers and Orioles.

On one glorious June day in 1985 (specifically the 11th) Hayes led off the game with a homer against Mets pitcher Tom Gorman and later in the first launched a grand slam off of Calvin Schraldi, being the first player to ever homer twice in the first inning of a game.

By 1986, he was putting up All Star caliber numbers, leading the league with 46 doubles, launching 19 homers, driving in 98 and batting .305 while stealing 24. Back then, those were considered to be MVP numbers. His .859 OPS and 133 OPS+ shows he was having a good year by any metric. He finished 8th in the MVP vote. The next year he walked 121 times, but nobody noticed.

The Phillies looked like a team on the rise with players like Hayes and Juan Samuel emerging but it never worked out. Hayes was rumored to be dealt to the Mets in the late 1980’s but Samuel was sent packing instead.

Since then he has bounced around the minor leagues, independent ball and Mexico as a manager while remaining a fan favorite in Philadelphia.

Von Hayes is kind of an 80’s relic. He was fast with decent power. That was worth, at the time, 5 major leaguers in return. 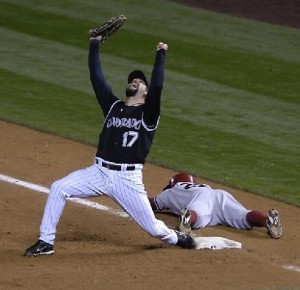 The Giants need to try and take advantage of all the AL teams bunch together to make good trades. Meanwhile, there is NOTHING wrong with bunting your way on to break up a no hitter. Too many teams are within striking distance of a playoff spot to worry about manners.

Also talking about Ortiz and A-Rod and retiring numbers and remembering the 2007 Rockies.

It is a Rocky Mountain High episode of Sully Baseball.