The Rays could very well win the American League pennant this year. We all have to be fine with that because it is a great story. They have been a great story for a decade. I pick the Rays team that should have won plus I explain my disdain for fire crackers on this Fifth of July.

Get over your 4th hangover on this episode of Sully Baseball.

END_OF_DOCUMENT_TOKEN_TO_BE_REPLACED 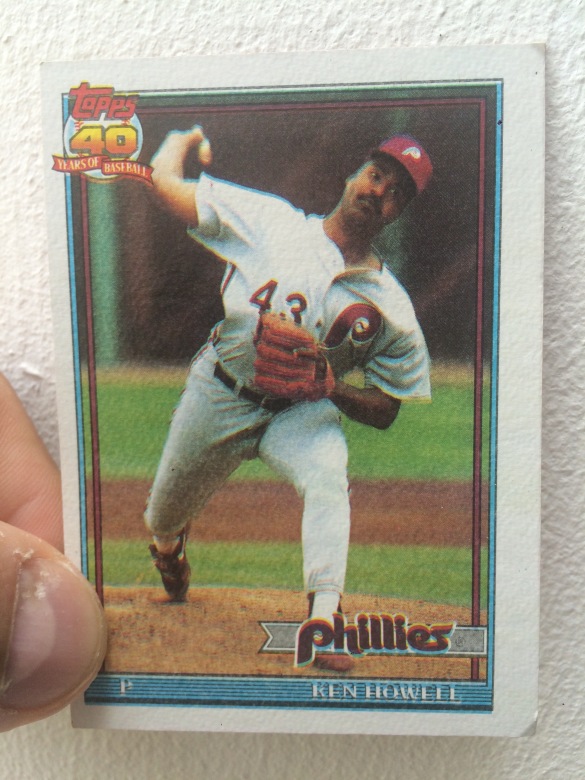 This series of blog posts are about baseball cards. But sometimes we forget the men on these little pieces of cardboard are real people. They aren’t just a name attached to the numbers listed on the back.

I am guilty of trashing players and saying things like “they should just cut him” or “he stinks.” And more often or not I am not taking into account the real person who I am casually suggesting they send their life into chaos.

This card of Phillies pitcher Ken Howell subtly reminds us of that.

The Detroit native attended Tuskegee University and was a third round draft pick by the Los Angeles Dodgers in 1982. The right handed pitcher made the big league team as a reliever two years later as a set up man.

Dodgers manager Tom Lasorda used him as a part time closer and long reliever in 1985. On April 24, he threw 3 2/3 innings of shutout ball against San Francisco, striking out 8 and earning the save. A week later on May 1, he threw 3 shutout innings to earn the win against the Cardinals. He saved 12 games that season, 5 in the month of July alone.

In the NLCS, he threw 2 perfect innings in Game 5, the one ultimately lost by Tom Niedenfuer with the Ozzie Smith “Go Crazy Folks” home run.

The Dodgers struggled in 1986, a year Howell led the Dodgers with 12 saves. In 1987 the Dodgers once again fell out of contention and Howell lost his closer job to Alejandro Pena and Matt Young.

Injuries wiped out nearly his entire 1988 season. He made one appearance in June and returned to the team for 3 relief appearances in September. He was left off the post season roster but earned his World Series ring.

When the season ended, he was sent packing to Baltimore in the trade that brought future Hall of Famer Eddie Murray to Los Angeles.

Actually I hope he never unpacked because 4 day later he was traded to the Phillies. His time in Baltimore was just 4 days in December.

Converted to a starter in Philadelphia, he pitched decently. Howell threw 204 innings and posted a 3.44 ERA, winning 12 for a non contending club. He even threw a complete game shutout against the eventual Division Champion Cubs.

Injuries cut his 1990 season short. It would be his last one in the majors. After a few comeback attempts in the minors and independent ball, he retired. Soon he became a coach, rising all the way up to the majors, being a part of Joe Torre and Don Mattingly’s staff with the Dodgers. He was a Dodger coach for the the 2013 and 2014 NL West titles.

But when I flipped over this Topps card, I saw something at the bottom that caught my eye.

He and his wife were building a house in Michigan. Usually the fun fact at the bottom of the card has to do with their career. But here was a reminder that “Nope, this is a person, a man with a wife building a home.”

And real life has not always been kind to Ken Howell. Complications with his diabetes led to the amputation of a few of his toes. He has had multiple surgeries due to kidney failure, the last one causing him to step down from the Dodger coaching staff.

I hope they got that house built.