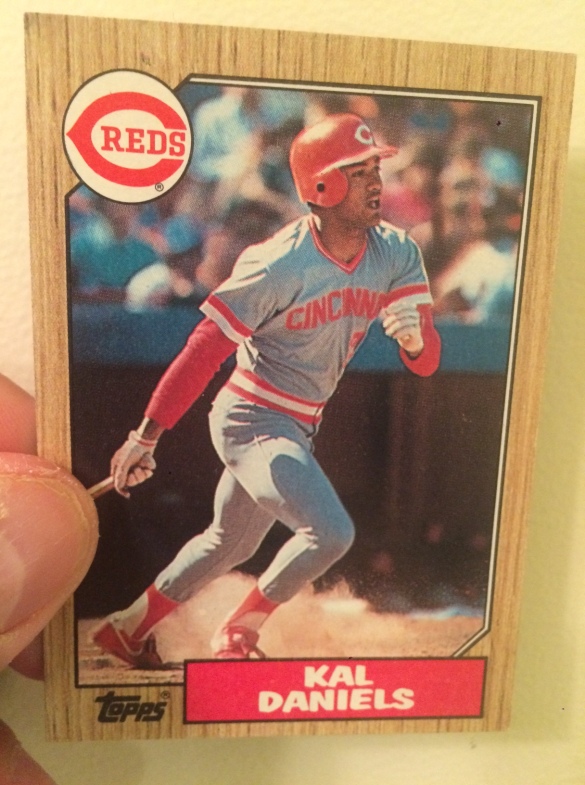 Kal Daniels was a player whose career began with a bang and faded out before his 30th birthday.

He is exactly the kind of player that would have taken PEDs in the 1990s but sure didn’t look like he did in the 1980’s. He also intersected with Pete Rose, Marge Schott and Darry Strawberry in memorable ways.

Kalovski Daniels was drafted by the Reds as the 7th pick overall in the 1982 draft out of Middle Georgia College. By the time he arrived in Cincinnati for the 1986 season, he was a talented left handed hitting outfielder in a crowded outfield. Eddie Milner, Dave Parker and Eric Davis were all established. But Daniels’ .320 average and .917 OPS in 207 plate appearances got manager Pete Rose’s attention.

In 1987, Milner went to San Francisco and Daniels got his playing time. He batted .334, homered 26 times, stole 26 bases and slugged .617. Nobody knew it then, but his OPS was a staggering 1.046. Knee injuries put him on the DL for a while but he looked like a potential MVP candidate.

The Reds, with Pete Rose at the helm, did a nose dive in the standings and lost to the scrappy and built on the fly San Francisco Giants. We all found out what he was doing as manager. It is a shame because the Reds were putting together an outstanding core which could have resulted in multiple playoff trips.

In 1988, Daniels led the league in on base percentage, .397, while homering 18 times and stealing 27 bags in 140 games. Once again the Reds lost the NL West to a scrappy over achieving team, this time the Dodgers. (See a pattern for the Pete Rose led Reds?)

If there was one thing less stable in the Reds clubhouse during the 1980’s than Pete Rose’s gambling problem, it was the existence of Marge Schott.

Ohhh if only she wasn’t an incredible racist with an affection for Hitler. Her total despicable persona overshadowed some of her endearing lunacy. Bring her dogs on the field and getting plane tickets for her stuffed animals are funny details about her.

So was her method of taking Kal Daniels to arbitration. As they haggled over what he would paid in 1989, she decided the best thing to do would be flip a coin. And that is exactly what they did. With cameras there in the parking lot, they tossed the coin, Daniels called it correctly and he got a few hundred thousand dollars more of Marge Schott’s money.

But that year his knees acted up again, requiring more surgery. Midway through his injury plagued 1989 season, while the Pete Rose investigation was underway, Daniels was traded to the Dodgers along with Lenny Harris for Tim Leary and Mariano Duncan.

So he would miss the 1988 Dodgers and the 1990 Reds World Series titles by a year on both sides.

As his former teammates were winning the 1990 title under new manager Lou Piniella, Daniels had a comeback season in L. A. He stroked a career high 27 homers for the Dodgers, posting a .920 OPS and .296 average. In September, he hit .354 with 8 homers and slugged .722 for an OPS of 1.162, earning Player of the Month honors.

In 1991, the Dodgers acquired Darryl Strawberry and had images of an NL West title dancing in their heads. Daniels had a poor April and had a hard time righting the ship. By July, he posted a .950 OPS but only played in 15 games. He flopped after July as he struggled at the plate and with knee issues.

Strawberry said publicly that the Dodgers should deal Daniels because he was too hurt and “doesn’t want to play.”

Daniels, understandably, was livid and said Strawberry had “mental problems.” The feud bled into Spring Training 1992 when Strawberry tried to apologize but Daniels was having nothing of it. The two avoided each other and eventually Daniels was on the Cubs.

Injuries wiped out his career. He was done after 1992 and before his 30th birthday. Had he experimented with PEDs, he might have lasted longer.

As it was he had success if not stardom and put up solid numbers, albeit ones hindered by injuries.

And he picked up some money along the way, even more because he called heads or tails correctly once.