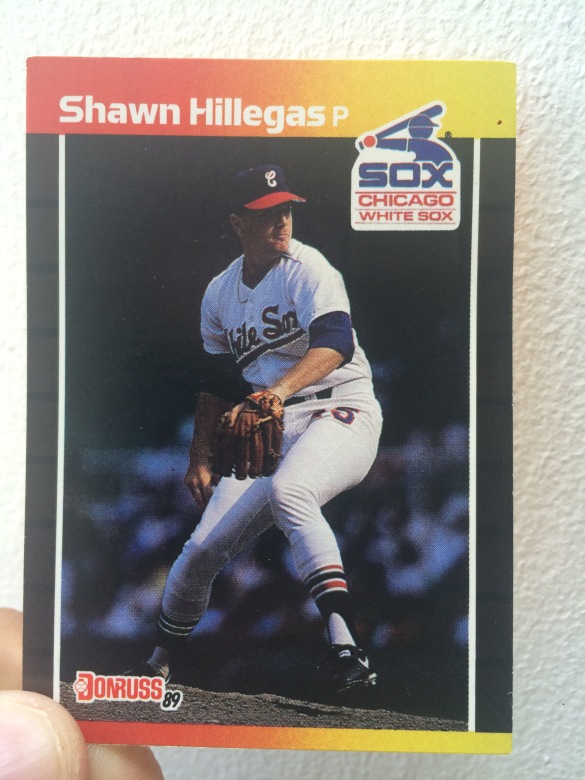 One of the first Card of Days I did for this crazy series was one for Ricky Horton on January 12. Click HERE if you don’t remember it. There will be a test at the end of the year.

In that entry, I pointed out that the former Cardinals lefty is pictured in a White Sox uniform but he actually didn’t finish the season on the South Side of Chicago. He completed the 1988 season pitching in the post season and earning his World Series ring with the Los Angeles Dodgers.

A solid career which saw him part of 2 World Series game 7 losses in St. Louis was capped with a ring. It is odd when a player earns a ring for a team they only played with for a handful of weeks, but I bet the ring fits beautifully on Horton’s finger.

But for every person who jumped on board early to pick up a ring, there is someone who was there for most of the year and didn’t get their chance.

Shawn Hillegas was the 4th pick overall in the January 1984 draft coming out of Middle Georgia College.

The Dodgers, going through a transition from the 1981 champs, were bringing in new talent without missing a beat in October. They nearly won the division in 1982 and indeed won in 1983 and 1985, all the while bringing in new faces.

The Georgia boy pitched against Atlanta in Dodger Stadium. Veterans like Steve Sax, Mike Marshall, John Shelby, Mike Scioscia and Ken Landreaux all were in the lineup for LA.

He was up for the challenge. Through 7 he had a 1 hit shutout. He let up a 2 out single to Graig Nettles (he must have been 100) before finally allowing a run in the 9th. Tim Crews got the final out as Hillegas went 8 2/3 innings for the dominating win.

He pitched well over 10 starts and 2 relief appearances to finish 1987 and give the Dodgers some hope for 1988.

Hillegas began 1988 in AAA but by June he was on the big league roster. Once again he threw 8 2/3 innings to win the game. Once again it was against Atlanta. The Braves pitcher? Tom Glavine.

He pitched reasonably well in July of 1988 but got hit hard in some games in August. As the team was gearing up for a post season run, Hillegas’ role seemed to be that of a middle reliever.

Or maybe a White Sox pitcher. Just before August became September, Hillegas was traded for Ricky Horton, who earned his ring. Hillegas made a few nice starts for Chicago and probably watched the World Series from his home.

The career did not take off the way the White Sox hoped after the deal. A full mediocre year in Chicago as a starter led to his conversion to the bullpen in 1990 and another trip to the minors. He bounced between the Indians, Yankees and A’s, playing on the 1992 AL West champs but was not on the post season roster. His MLB career was done in 1993 and after a comeback attempt in independent ball, he was done.

Maybe his fortunes would have fared better in LA. Maybe he would have had the same career. But he would probably have had a chance to play in October… but it was meant to be for Ricky Horton, not Shawn Hillegas.