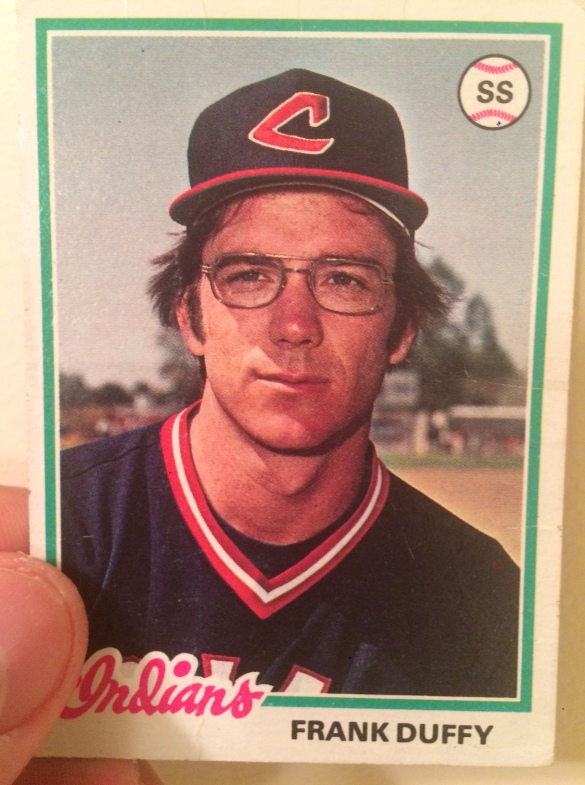 OK, by now you know how these Card of the Day entries go.

I find a card in the shoe box. I pull it out. If I have any personal memories of the player or of the card itself, I share it. I provide some biographical info about the player, some of their best games, I salute, I move on and pull out another card.

This Frank Duffy card brings back two emotional memories. One was an introduction to reality. One is stupid and the only reason it is not embarrassing is the fact that I was 6 years old when this impulse took place.

OK, let’s get all the baseball stuff out of the way, shall we?

Duffy was from the Bay Area and went to Stanford where the Reds drafted him in the late 1960’s, a good time to be drafted by the Reds. He made a handful of appearances with the 1970 NL Champion Reds but was not on the playoff roster.

Midway through the 1971 season, he was dealt to San Francisco. He only played 21 games for the Giants that year and did not hit much. He DID get an at bat in the 1971 NLCS against Pittsburgh.

That trade, to be kind, did not work out well for the Giants. Duffy was a Giant for those 21 regular season games and the strikeout in the NLCS.

The Reds got George Foster in the deal, who was a key part to the 1975 and 1976 World Championships and won the 1977 NL MVP and multiple home run titles.

It is never a good thing for someone’s reputation to be mentioned in the wrong end of a horrible trade. Fortunately for Duffy, he was dealt after 1971 to Cleveland and was part of another horrible deal, this time the other way.

The Giants traded Gaylord Perry, who they thought was fading, to the Indians along with Duffy for Sam McDowell. McDowell faded while Perry won a Cy Young in Cleveland and later another one in San Diego and pitched into the mid 1980’s.

For 6 seasons Duffy was a starting infielder in Cleveland, never putting up great numbers but fielding his position well enough to get the call.

One of his best games came on June 23, 1975 against the eventual AL Champion Boston Red Sox. He doubled off of Jim Burton in the first, driving in a run and knocking out the starter. He would later crush a 2 run homer off of Diego Segui and finish the game 4 for 5 with 5 RBI.

He played with the Indians in 1977, thus this 1978 card was produced with the classic “Tomahawk C” cap. Late in spring training of 1978, he was dealt to Boston for pitcher Rick Krueger, one of seemingly 4,000 deals between the Red Sox and Cleveland that year.

Duffy was brought in for infield depth and wound up starting 30 games that season. When Butch Hobson’s injuries kept him from fielding his position down the stretch, Duffy saw more playing time but not as much as Jack Brohamer.

Duffy did appear in the 1978 Bucky Dent playoff game as a defensive replacement but never got an at bat. He did not seem to have the best time in Boston as he is credited with describing the unfriendly Red Sox clubhouse as “24 guys getting into 24 cabs.”

He was released after a handful of games in 1979.

OK, got all that out of the way.

Now for the two memories. I remember opening the pack back in 1978 and thinking this guy didn’t look like a baseball player but like someone’s dad. When I was looking at the card, MY dad saw him and knew how excited I was to get Red Sox players in my packs.

Confused, I replied “No he isn’t. He is with the Indians.”

“He was last year but NOW he is with the Red Sox” he replied.

I began to understand that these baseball cards could not be updated instantly and players tend to move around. It was an interesting lesson.

Then I looked back at this picture. He had a name that sounded familiar (I had no idea it was because it was an Irish name and there were lots of Irish names in Massachusetts.) There was something comforting and familiar about his face. And the 6 year old version of me had a strange impulse.

I put my finger on the nose of Frank Duffy on the card and went “BOOOP.”

To this day, I have no clue why I did that. It felt like the right thing to do for some reason. I wouldn’t go “BOOOP” to Thurman Munson, or Rick Burleson, or Dave Parker, or Johnny Bench or Dock Ellis.

But somehow it felt right with Frank Duffy.

And here we are nearly 40 years later. I see this card and in the back of my head I think “BOOOOP.”