He MUST! I am not just basing that statement on this card cut out from the bottom of a Twinkies box in 1979.

Take a look at this card cut out from a Twinkies box in 1977.

Not convincing enough for you?

Or how about how he looked just MOMENTS after clinching the 1977 World Series. 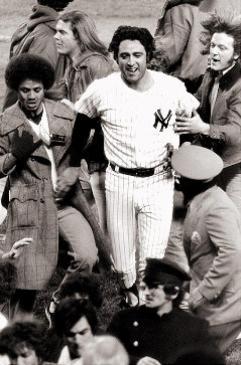 He threw the last pitch, caught the final out and BOOM! Hat is off.

I have two theories. One is the times he DID wear a cap in a picture, they were often HORRIBLY airbrushed.

Check out his A’s cap turned into a Yankees cap in this Burger King Card from 1977. 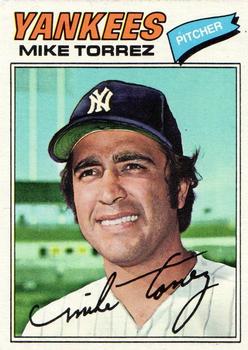 And later when he WAS wearing a Yankees cap, it transformed into a pseudo Boston lid.

His jumping from the Yankees to the Red Sox via free agency was initially a huge coup for Boston. Torrez, who had a long and solid if not spectacular career with St. Louis, Montreal, Baltimore and Oakland, had been a rock steady addition to the Yankees in 1977.

He worked out of the bullpen in the clinching Game 5 of the 1977 ALCS, setting up the Yankees dramatic come from behind victory. Then in the World Series pitched a pair of complete game victories, including catching the final pop up to seal the Yankees’ first title since 1962.

He came along to the Red Sox and gave them a typical Torrez year. Lots of innings, solid pitching and a bunch of wins were on the menu. He was tapped to face his former team in the one game playoff for the AL East and had a shutout going into the 7th.

Then up came Bucky Dent. And there are still loons in Boston who think Torrez was a double agent, still feeling loyalty to his former Yankee teammates and served it up on purpose.

As with most goats in baseball history, it is a shame that Torrez’s career was defined by that one pitch. He pitched in 16 complete seasons at the big league level and parts of two others.  He was a 20 game winner, consistently threw over 200 innings, played along side several Hall of Famers and was one of the brightest stars in a classic World Series.

Torrez didn’t get the start for the tie breaker game because he sucked!

As for the hat thing, I have another theory, and one that I think is most accurate:

Torrez was a good looking dude. Seriously, look at this guy.

He’s a handsome guy with a GREAT head of hair. And how do you think he looks now?

He still looks handsome in a distinguished way and with a great head of hair. Maybe he didn’t want to wear a cap because he loved his hair.

I do not blame him. It is a GREAT head of hair.

Now let’s remember the greatest moment of his career, the end of the 1977 World Series.