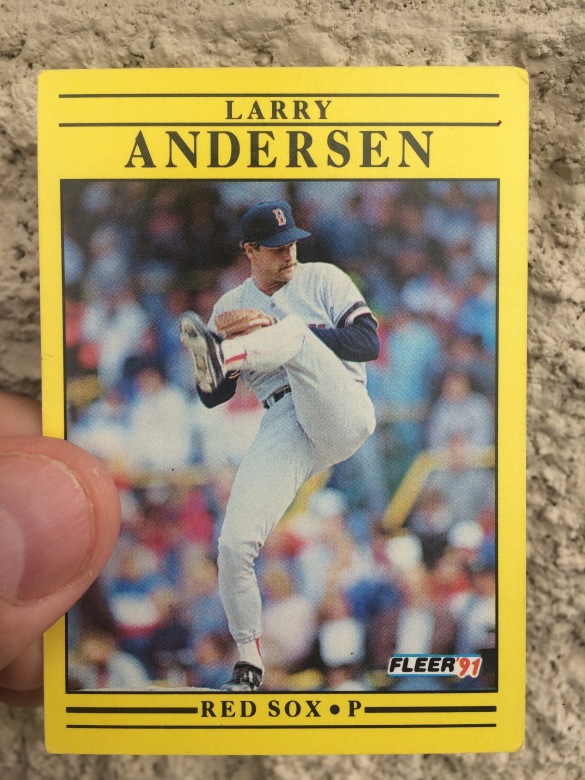 With Jeff Bagwell going into the Hall of Fame this year, Larry Andersen will be mentioned often.

Bagwell was traded for Larry Andersen and an all time bad trade was pulled off.

Let me try to justify the trade.

Larry Andersen had a long and solid career as a reliever. After bouncing around the Cleveland and Pittsburgh systems throughout 1970s, he finally broke through with the 1981 Seattle Mariners. He was a part of the Phillies bullpen when they won the 1983 pennant and pitched in the thrilling 1986 NLCS for Houston.

In 1990, the Red Sox were aiming for a Division Title and possible ALCS rematch with the A’s. They looked like they were finally getting some breathing room against Toronto with an 8 game winning streak that padded their Division lead to 6 1/2 games. Roger Clemens was having one of his best seasons ever and Mike Boddicker was a reliable number 2 starter.

But the rest of the rotation consisted of overachievers like Dana Kiecker and Tom Bolton. And the bullpen was hardly deep. Closer Jeff Reardon was the only reliever to finish the season with an ERA under 4.00. If Boston would have any hope to hold off Toronto for the Division and beat Oakland for the pennant, they would need pitching depth.

Andersen came over from Houston on the last day of August and pitched well in September. In his 15 games and 22 innings pitched, would strikeout 25 while walking only 3. He posted a 1.23 ERA, earning a save against the Yankees on September 21st. Andersen would not allow a run in his first 11 appearancesfor the Red Sox. As it turned out, they needed every bit of help in the pen. Boston finished the season 13-17, but winning the Division on the final day of the season.

They got clobbered in the ALCS. Andersen lost a game in relief as Oakland swept the Red Sox in 4. He would leave Boston and sign with San Diego.

Acquiring the bullpen depth for the stretch run did not cost Boston a single player on the major league roster. And native New Englander Jeff Bagwell looked expendable. He was a fine hitting prospect, but farm hands Tim Naehring, Mo Vaughn, Scott Cooper and Phil Plantier all looked more promising. Besides, Bagwell was a skinny kid without a lot of home run power.

Transformed in Houston he became the Rookie of the Year in 1991 and NL MVP in 1994. The idea of giving up a native New England 1-2 punch of Bagwell and 1995 AL MVP Mo Vaughn tortured Red Sox fans.

Anderson pitched for four more seasons and earned a save in the 1993 NLCS for the Phillies. He finished his career during the 1994 strike, logging 14 plus seasons in the majors.

Andersen is now an announcer with a great set of pipes. It is safe to say he is not one of the most beloved former Red Sox of all time. Hopefully 3 recent World Series titles will heal that wound.