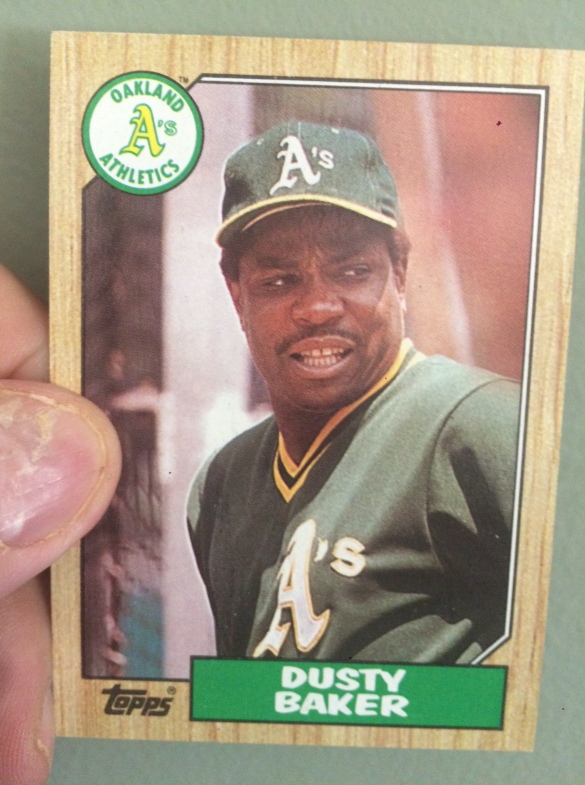 With Hall of Fame Weekend over, we get back to the business of baseball. Now I am a Red Sox fan and I am still hoping they can win this year. Although I am getting less and less confident of their chances.

If they can’t win, I hope the Washington Nationals can. There are many reasons for that. Friend of the podcast Sean Doolittle is now on the team. The city of Washington has not had a pennant since 1933 nor a World Series champ since 1924 when the Senators were there. The fact that I have to phrase that so specifically makes me want to simplify it.

It would be the franchise’s first title, including the time as the Montreal Expos.

And oh yeah, I believe it will put Dusty Baker into the Hall of Fame. And Dusty Baker being enshrined as a Hall of Fame manager will be great for the game and wonderful is seeing all the people it will drive crazy.

Throughout the mid 1970’s Baker was a solid offensive performer for Atlanta, being a 20 homer and 20 steals man in 1973. He was on deck when Henry Aaron his home run number 715.

As good as he was in Atlanta, he became a star in Los Angeles when he arrived as a Dodger in 1976. He went to the Dodgers in a trade involving Lee Lacy, Tom Paciorek, Jim Wynn, Ed Goodson and Jerry Royster.

The end of his career saw him bounce between the Giants and the A’s. His final manager was Tony LaRussa, a skipper with whom he would clash later in his career.

After his career ended as a player, he found himself in Roger Craig’s coaching staff for the Giants.

Eventually he would be named manager. With the arrival of Barry Bonds, he would win 103 games in his first year at the helm. It would be the first of three Manager of the Year awards he would win in San Francisco.

Since then, he has brought the Cubs, Reds and Nationals to the post season. There is no denying that teams have played well under him. If he wins a World Series, then this amazing resume will be prologue.

Of course there have been some collapses in his career. I do not count 1993 as a collapse. The Giants played winning ball down the stretch and won 103 games. The Braves simply won so many games that there was no stopping them. Plus Atlanta should have never have been in the West.

But the Giants did indeed collapse in the 2002 World Series. And the image of Dusty Baker giving the game ball to Russ Ortiz in Game 6 when the Giants had a 5-0 lead was embarrassing premature celebrating.

Forget Steve Bartman. His handling of the Cubs pitchers and his bullpen management with a Cubs pennant on the line in 2003 was borderline insane.

The Reds blew a 2-0 lead going back home in the 2012 Division Series. They would end the 2013 season with a 6 game losing streak and fall in the Wild Card Game. Also his pitching management in last year’s Division Series loss to Los Angeles was, um, interesting.

And oh yeah, he puts together a lineup evidently by throwing darts at a dart board. Baker dismisses the importance of on base percentage by saying he doesn’t want to clog the bases. This has made him a target for the sabermetrics crowd.

While Baker has won playoff spots everywhere he has managed, talk to the fans of those teams. My dad, a rabid Giants fan, has his face blanch when I mention his name. We agree that letting his 3 year old son run onto the field during the 2002 World Series was nowhere NEAR his dumbest decision that October.

And with all that in mind, I want him in the Hall of Fame. Dusty Baker is a great character and beloved by his players. And all of those things that make him a POOR manager in so many people’s eyes makes me want to have fun and get him a plaque.

So Go Nats! If the result will be Dusty Baker is in the Hall of Fame and people everywhere shake their heads and think “Oh man, I can’t believe it”, then it will all be worth it.