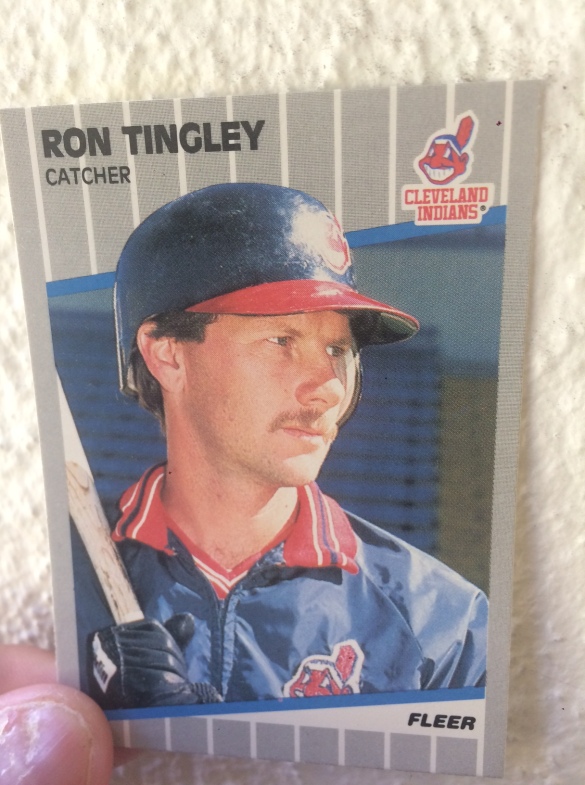 Ron Tingley made his major league debut in 1982. Nine years and parts of five major league seasons later, he was still technically a rookie.

A model of tenacity, he had one of the longest rookie statuses you will ever see.

A native of Maine, he was drafted out of his Riverside California high school in 1977 by the Padres and at age 18 was assigned to Walla Walla. Between 1977 and 1979, he struggled with the bat at Single A but the catcher made his way to Double A. He was sent back down to Single A Reno for 1980.

At Reno, he batted .299 and suddenly became a prospect. Promoted to another stint at Double A in 1981, he got double digits in homers and triples and hit .288.

In 1982, he found himself in Hawaii, not a bad place to be. It was the Triple A affiliate for the Padres and he hit well there as well.

That September 25th, he started a game for the Padres against the eventual NL West champion Braves. He went 1 for 3, making him a major leaguer.

He spent all of 1983 in Triple A Las Vegas. Between 1982 and 1988, Ron Tingley played Triple A ball in 8 different cities. Hawaii, Las Vegas, Salt Lake City, Calgary, Richmond, Maine, Buffalo and Colorado Springs.

On August 3, 1988, he finally made it back to the majors. He started a game for the Indians against the Orioles. In his first at bat, he hit a 2 run homer off of Jeff Ballard. He added another hit that day for quite a first impression in Cleveland.

He spent 1989 in Triple A Colorado Springs before getting another crack at the majors. Only this time he was traded to California in the deal involving Mark McLemore. He played 4 games with the 1989 Angels, going 1 for 3 as a hitter.

Tingley’s rookie status was intact for 1990. He played in his 9th different Triple A team in 1990, calling Edmonton home before playing 5 games for the Angels.

Amazingly, his rookie status was still intact for 1991. As he played 45 games for the Angels, the 32 year old, who made his debut 9 years earlier and played for 3 different teams and over 5 different big league seasons, was FINALLY no longer a rookie.

He played all of 1992 and 1993 at the Big League level as reserve catcher for the Angels. He split the strike season of 1994 with the Marlins and the White Sox and a few games at Nashville, his 10th Triple A city.

After a full season with the Tigers in 1995 and a comeback attempt with the Angels in 1996, he called it a career.

Lots of players like to savor their rookie year experience. Nobody quite stretched it out like Ron Tingley.