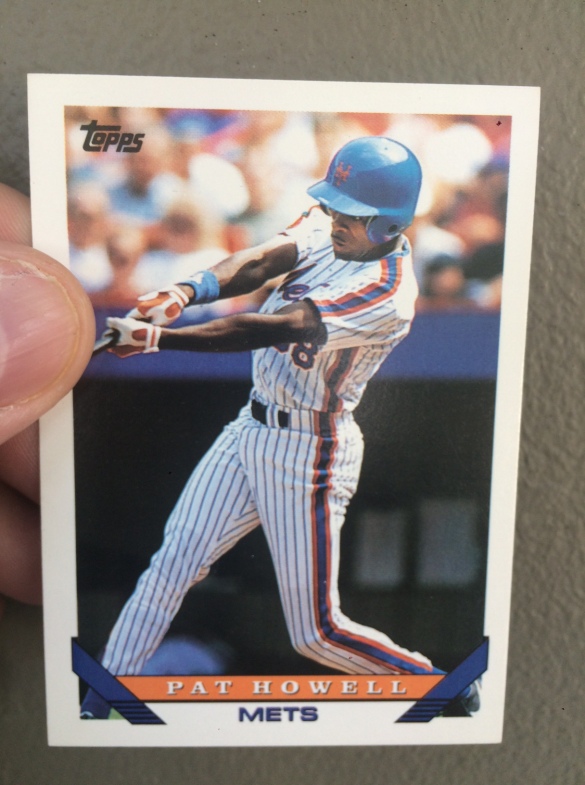 I was out of my mind following the game, as opposed to my laid back low key fandom that I have now, and I could remember virtually any player from then.

And reaching into the shoe box, I pulled out a 1993 card for Pat Howell.

Sorry, not one brain cell currently firing in my noggin has any recollection of Pat Howell.

This is especially odd being stumped on this player because he was a New York Met in 1992. Do you know where I was living in 1992?

NEW YORK! And back then, I didn’t have an MLB app or easy access to out of market games, so if I wanted to watch baseball in my NYU dorm room, I would watch the dreadful Yankees or disappointing Mets.

I guarantee you, I saw Pat Howell play.

And yet as I type this, I can tell you nothing about him. Oh sure, I will look him up, find some biographical info on him as I do for all of these Card of the Day entries. But usually when I find a card, I wind up saying “Oh yeah, I remember this card. I have an idea of what I am going to write about him!”

So after I am done typing this very sentence that you are reading right now, I will pull some info on him.

Let’s start with the back of his card.

Man, I hate it when Topps made the back of the card vertical and not horizontal.

Looks like he was a switch hitter from Mobile. Played a bunch of years in theMets system. Stole a ton of bases in the minor leagues. Got his call up in 1992 and played in 31 games and didn’t exactly light the National League on fire.

Better find out some more stuff.

He made his debut on July 10th in a game between the Mets and the Astros. Howell was put in the lead off spot in his first game and reached base on an infield hit to start off the game off of Pete Harnisch. He then stole second and went to third on the wild throw to second. He would then score on a Howard Johnson single.

It was a great start.

He reached base again in that game on an error by the right fielder and scored again. The Mets came from behind to win the game.

If only the rest of his 31 games went as smoothly. He had 3 multihit games and would steal a handful of games. The 23 year old was then traded to the Twins organization in the off season.

He never made it back to the major leagues. Between 1993 and 2004, he never stopped playing baseball.

Howell played in the Twins organization in 1993, was back with the Mets minor league teams in 1994. Between 1995 and 1997, he was in Mexico playing. In 1998, he was in China playing. Then he returned to America and played well in Independent Leagues between Duluth, Atlantic City, Long Island and several years for Nashua until his last year in 2004.

So here we go. I knew nothing about this guy. Now I know that Pat Howell is a baseball lifer. Maybe not in the majors, but he stayed in the game a long time.

That was a nice thing to learn.