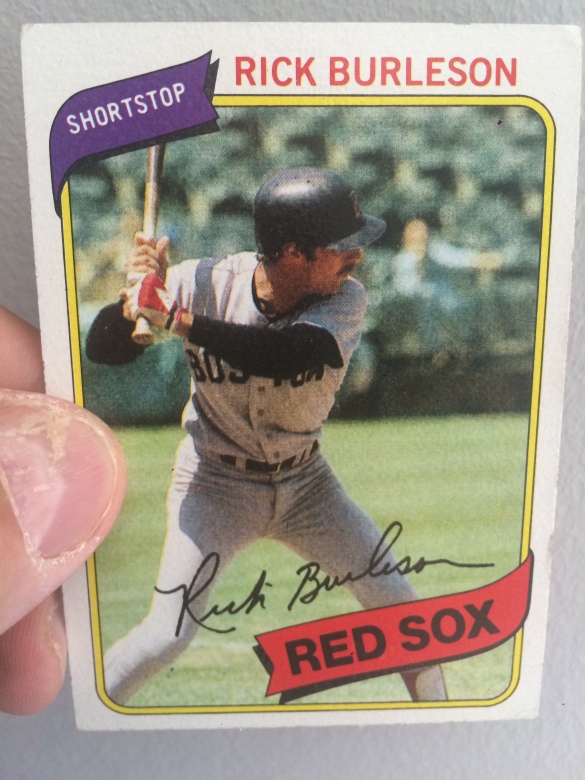 When I first started following baseball in the late 1970’s while living in the suburbs of Boston, there were several players who I just assumed were going to be Boston Red Sox players for life.

I understood that some players leave, some were traded away. But as I studied the backs of baseball cards, I saw there were a bunch of players who ONLY played for the Red Sox.

Rick Burleson was one as well. He was ordained a Red Sox for life, permanently inserted into shortstop, never to leave his post.

The Rooster was intense, a solid fielder and seemed to have a reputation the exceeded his actual statistical output.

Burleson was a first round pick by Boston in 1970 in that strange January draft that doesn’t exist anymore. He was groomed to be a potential replacement for retiring future Hall of Famer Luis Aparicio.

In 1974, he beat out Mario Guerrero for the job and inserted himself into the Red Sox lineup. He finished 4th in the Rookie of the Year vote, batting .284.

By 1975, with Fred Lynn and Jim Rice sparking the team, Burleson was part of his first pennant race. He batted .252 with an OPS of .634. In 1975, that was good enough to earn him 13th place in the MVP vote. There was a part of Burleson that met the eyeball test but would not impress today’s analysis.

In the post season, Burleson hit .444 with an OPS of 1.167 in the ALCS against Oakland, including getting 2 hits and scoring a run in the 5-3 Game 3 clincher.

He followed that up with reaching base 4 times and driving in a run in the first game of the 1975 World Series. He played every inning of every game of the World Series, which of course is considered one of the greatest of all time.

He played virtually every day and endeared himself to the fans with his intensity. Dubbed the Rooster by manager Don Zimmer, he hated to lose. His teammate Bill Lee said he hated to see the game tied.

After the 1980 season, the concept of lifelong Red Sox players was shattered in my mind. Carlton Fisk joined the White Sox after a contract screwup. My favorite player Butch Hobson was dealt to the Angels. So were Fred Lynn and Burleson.

Burleson signed a long term deal with the Angels and won the Silver Slugger Award in his first year in Anaheim, batting .293. (Looking back, it is amazing that Burleson, often a leadoff batter for Boston, never drew more than 62 walks in a season. Walks were just not valued back then.)

Entering his 30’s in California, Burleson looked like he was going to put together a solid second half of his career. He made up a terrific double play combination with Bobby Grich and the Angels were putting together a star studded team. After the 1981 season, Reggie Jackson joined Fred Lynn, Don Baylor, Rod Carew, Bobby Grich and Doug DeCinces to form a super lineup. Burleson had found himself on yet another superteam. But an injury cut his 1982 season down to only 11 games. He remained on the sidelines as the Angels lost the ALCS to Milwaukee.

He returned to have a good 1986 season as a part time player and once again was in the ALCS. In a cruel irony, he witnessed the Red Sox come from behind to beat his Angels, with Jim Rice and Dwight Evans driving in the final daggers.

After playing 1987 in Baltimore, he retired. He has been a coach and minor league manager for the last few decades, but never finding himself on the short list for big league jobs.

I wonder if Rooster did not get hurt and continued to have solid but statistically unremarkable seasons in California if he would have had a Hall of Fame case by the voters of the later 1980’s, early 1990’s. If they would have said “For a decade he played hard and with grit and gusto” etc.

As it was, he received zero Hall of Fame votes. His former teammate Bill Campbell received one.

He IS a member of the Red Sox Hall of Fame. Maybe it would have been best if he was a Red Sox player for life.