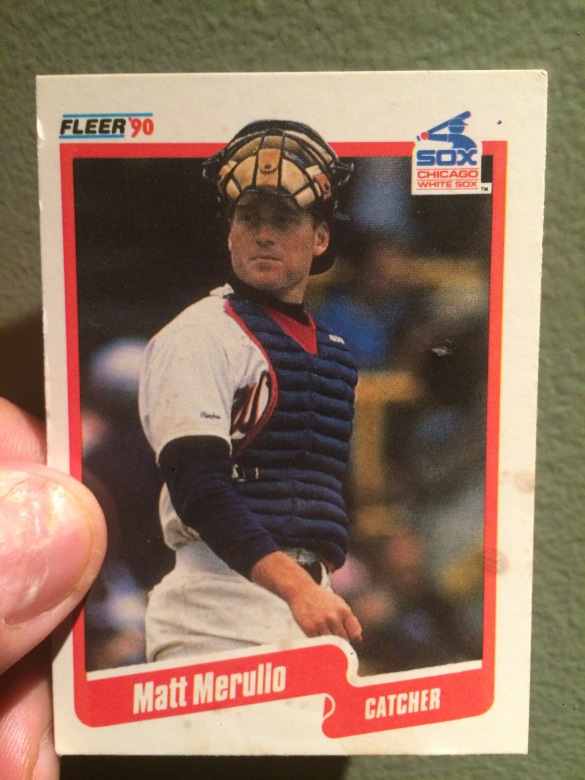 “Did you hear about that Matt Merullo kid? I hear he is going to be great.”

I heard more about Matt Merullo, a reserve catcher for the White Sox, than you would ever think short of being a member of the Merullo family.

There was a reason for that. I had recently moved to New York from California to start college in 1990. That meant I spent a lot of time with relatives, various cousins, aunts and uncles in Connecticut. Being in close proximity to relatives I did not see often was one of the reasons I chose to go to school at NYU.

So there were plenty of days 18 year old Sully was sitting with some old timers in Fairfield or Bridgeport Connecticut. The topic of baseball would come up because it was wise for me to avoid politics.

When baseball would come up, Matt Merullo would be a topic. “I hear he is doing great. He is going to be a star player.”

Now I knew damn well that MY chances of being the starting catcher for the White Sox was only slightly worse than Matt Merullo’s. This was not a slight on him. He made it to the major leagues and I was having a sandwich in Fairfield with men 40 years my senior, so clearly he had the upper hand.

The reason Merullo was such a hot topic was he went to school near by and he was a local kid who did well.

Merullo was the grandson of Lennie Merullo, a native Bostonian who went to Boston College and played with the Cubs. He was part of the 1945 NL Champs and lived until 2015 at the age of 98. He was, at the time, the last living player who appeared in the World Series with the Cubs. Now there are quite a few more.

Lennie Merullo was included in the 2015 edition of the Sully Baseball In Memoriam videos which you can see by clicking HERE.

Lennie’s name came up a lot because, well, he was a native New Englander who was Catholic.

His grandson, Matt, attended Fairfield Prep in Connecticut. My dad went there. So did several of my cousins. My Uncles on both my mother and father’s side of the family went there. At one point, I thought I was going to go to Fairfield Prep except for the fact that we didn’t live in Fairfield.

Fairfield Prep was hardly a baseball factory. As far as I could tell, at the time Matt Merullo was the first to make it to the major leagues. No wonder they talked about him like he was the second coming of Carlton Fisk.

He went to UNC Chapel Hill and was drafted in the 7th Round by the White Sox in 1986. By 1989, he was in the big leagues, the first (as far as I can tell) Fairfield Prep grad to make it that far.

In his first ever start, he went 2 for 4 and homered off of Rick Honeycutt in a game against the eventual World Champion Oakland A’s. No doubt they were celebrating at the Seagrape in Fairfield.

When I arrived back in the East Coast in 1990, Merullo was still in the minors, where he stayed the whole season. Remember how I made the analogy to Carlton Fisk. Well, the ACTUAL Carlton Fisk was still starting for the White Sox and doing quite well, thank you very much.

After Fisk was Ron Karkovice, a talented defensive catcher who would start for most teams that the White Sox had waiting in the wings for Fisk’s decline.

Merullo was third in the line of succession. He was the Speaker of the House for the starting catching position on the White Sox. But getting that close was the act of a pioneer in Fairfield.

By 1991, the 25 year old Merullo was back in the big leagues and all of Fairfield rejoiced. While Fisk made the All Star team that year, Merullo managed to get into 80 games, starting 13 times at catcher and 10 times at first base. Getting playing time was rough with Fisk and Frank Thomas still producing.

No doubt someone in Fairfield thinks that it took two Hall of Famers to stop him from being a star.

The biggest game of his career took place on June 2, 1991 once again against the A’s. At this point Oakland was the three time defending AL Champ and Mike Moore was beating the White Sox in the 8th 3-1. Robin Ventura singled to make the score 3-2.

That’s right. Merullo pinch hit for Sammy Sosa in a big spot against the A’s in the 1990s. (This was before Sammy was SAMMY SOSA, but those are just details.)

On a 3-2 pitch Merullo slammed a ball into right field, scoring Dan Pasqua and Robin Ventura giving the White Sox the lead.

Merullo would be lifted for a pinch runner and Carlton Fisk was inserted into the game. But the offensive hero of the game was Merullo as the White Sox won 4-3.

In 1994, he played 4 games with Cleveland. Then after the strike and lockout ended, he resurfaced with Minnesota and had the best year of his career. He played in 76 games, starting 37 at catcher. He hit a respectable .282 for Tom Kelly’s team, had a modest 8 game hitting streak and on June 19th had a 4 hit game.

Guess which team he did it against. The A’s.

That was it for his career as he didn’t play in the majors again after 1995 but he made it to the bigs and became a point of pride for everyone in Fairfield.

Since then, pitcher and Fairfield Prep grad Mike Porzio played a few seasons in the majors including a few seasons for the White Sox in the early 2000’s.

No doubt the old timers in Fairfield had some great things to say about him.