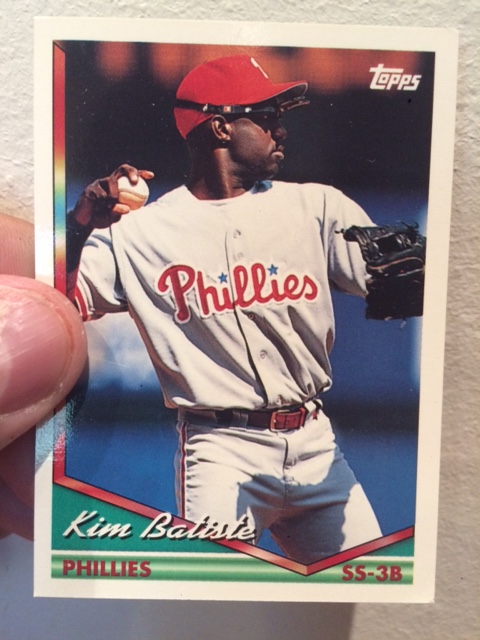 This may sound like hyperbole, but I sincerely believe that Kim Batiste had one of the most beautiful illustrations of what makes baseball great in the history of the game.

I mean the ENTIRE history. From the moment that Abner Doubleday wrote down the rules (I know he didn’t, I am saying that metaphorically) to the games being played as I type this, Kim Batiste provided us with one of the best moments in that stretch of time.

Is it as great as Jackie breaking the color barrier or Kirk Gibson’s homer or the post September 11 World Series. OK, maybe not. But let me say this: When I saw it live, I cried. I watched it earlier today. Still got a lump in my throat.

One of the beautiful but taxing elements of baseball is that it is played every day. Your team wins 19-1 one day and can lose 3-0 just 24 hours later. A player can be a goat one day and the GOAT the next.

And sometimes you can experience failure and other times you can redeem that failure. And Kim Batiste on a cold night in Philadelphia during the 1993 post season experienced the lowest low and the highest high within an inning.

The Phillies were in the NLCS but expected to be clobbered by the 104 win Braves who outlasted the Giants in one of the great pennant chases of all time. Philadelphia was a moderate roadblock for a stampeding Braves team with one thing on their mind: Winning the World Championship that barely eluded them in 1991 and 1992.

The Phillies, filling the NL East void left by the rebuilding Pirates, were a patchwork of veterans, castoffs and players in dirty uniforms. If there was ever a team that was “happy to be there” it was the Phillies. A Braves and Blue Jays rematch in the World Series was inevitable.

Philadelphia, who had home field advantage because of the arcane rules of 1993, had one shot. If they could win the games started by ace Curt Schilling and sneak one other game in, they could force a Game 7, which anything could happen. It was remote, but there was no room for error.

The Phillies jumped out to a 1-0 lead in the first in Game 1. After the Braves took the lead, Pete Incaviglia homered to tie the game. Incaviglia scored the go ahead tun in the 6th on a wild pitch and Schilling was dealing.

Manager Jim Fregosi handed the ball to Mitch Williams, something he did way too often in October of 1993. Wild Thing lived up to his name by walking lead off man Bill Pecota. Up stepped perennial October pain in the neck Mark Lemke.

He grounded to third base. Normally Dave Hollins was the third baseman for the Phillies. In fact he had been the third baseman all game until the 9th. Manager Jim Fregosi had inserted reserve infielder Kim Batiste for defensive purposes.

Batiste was in his third year on the Phillies bench. He had some success as a pinch hitter and defensive replacement, batting .282 in 161 plate appearances.

So Lemke grounded to Batiste with what looked like a potential double play. Batiste picked up the ball and threw wide, pulling second baseman Mariano Duncan off the bag.

Pecota ran to third as the tying run. Two batters later, Nixon grounded out what would have been out number 3. Instead it was out number 2 and Pecota tied the game.

Schilling would get a no decision and a Phillies team that could not afford to give the Braves any room suddenly were about to hand a game, gift wrapped to the mighty defending NL Champs.

And it was probably the most obscure Phillie who was responsible. As Phillies fans have the reputation of being a smidge unkind to their own players, Batiste was about to wear the goat horns and take the blame. If he fielded the ball cleanly and done his job (he WAS a defensive sub) the Phillies would have stolen a needed game. Now they were about to lose Game 1 and any realistic shot of a pennant.

That was going to be Kim Batiste’s legacy. He was the bum who threw away the 1993 pennant.

Somehow Williams did not allow the go ahead run to score. The Phillies went quietly in the 9th. Williams was sent out to pitch the 10th. He let up a 2 out double to Greg Olson but Terry Pendleton did not score. The game went to the bottom of the 10th, tied at 3.

With one out, John Kruk doubled. Usually he would have a the clean up hitting Hollins batting behind him and the other team would have walked him to set up a double play.

But Batiste was the batter. There was no reason to fear a reserve infielder. Reliever Greg McMichael got the count 1-2. Then Batiste swung and bounced it past his counterpart at third, Terry Pendleton. It went down the line, bouncing around the left field corner. Braves outfielder Tony Tarasco did not even pick the ball up. John Kruk raced home to score.

His teammates met Kruk at home plate but then rushed out to mob Batiste. As his teammates high fived him and pounded his chest, it was clear that “The Kim Batiste Game” now had a different meaning. It was no longer a game where the reserve infielder threw away their hopes of a World Series but rather one where he redeemed himself and put their unlikely push to the World Series back on track.

Danny Jackson, a veteran of several Octobers and new to Philadelphia, picked up Batiste and hoisted him on his teammates shoulders. The image of Batiste being carried off the field a hero, clapping and high fiving while the fans of Philadelphia cheer and scream remains one of my favorite images in baseball history.

Baseball can be cruel and a fleeting moment like a wild throw could define someone. But baseball also provide a chance of redemption.

The Phillies would be out hit and out pitched by the Braves but not beaten. The Braves won 2 blow out games in the series but the Phillies won 4 tight games and went on to win the pennant and face Toronto.

No small part of that pennant victory was the heroics of Kim Batiste, who is still remembered fondly by those tough Philadelphia fans for the heroics and redeeming.

It is one of my all time favorite baseball memories and shows the glory of the game as well as any event.