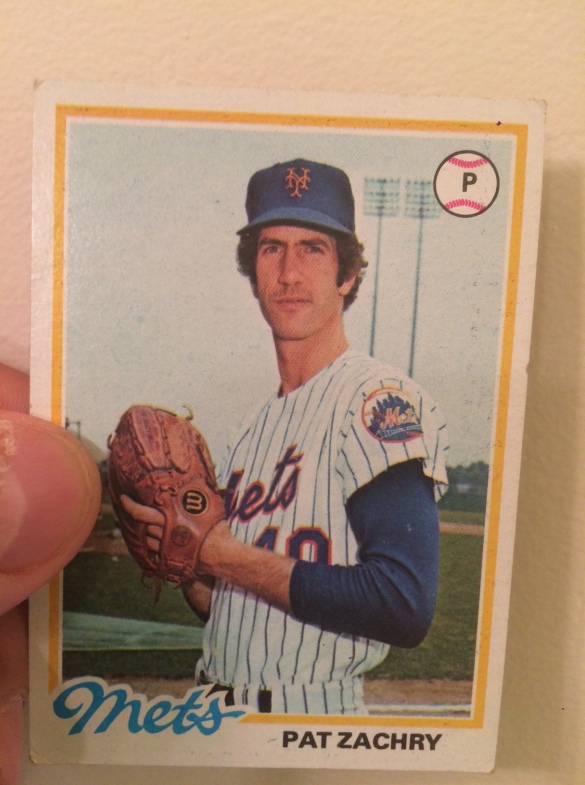 Trust me, I am being serious.

Zachary had ups and downs in the early part of his career, as many players do, managed to survive for a while, made some adjustments and played a decade in the majors.

And circumstances he had no control over put him front and center in glories for all time and having his name be cursed by a city from this day forth.

But the 19 year old Zachary won 12 games and posted a decent 3.21 ERA for the Reds Single A Tampa team in 1971. As the Big Red Machine was having success without a solid ace, Zachary was moving up the minor league chain.

In 1974 and 1975, he was having success with the AAA Indianapolis team. But the Reds teams were so dense that there was no chance for a call up.

Here is an example of Zachary not having control of his circumstances. He pitched well. He did well enough to play on the big league level. If he was with San Diego or Atlanta, he would have been in the starting rotation in 1974 and 1975. But he was drafted by Cincinnati, therefore he was a minor leaguer.

In 1976, he earned a spot on the big league team and made the most of it. He won 14 games, put together a 2.74 ERA over 204 innings pitched. He had pitched well enough to be a major league for the previous 2 seasons and now was showing it.

Because it was his debut MLB season, the 24 year old was a Rookie. He and Padres reliever Butch Metzger tied for the Rookie of the Year. Unlike Metzger, Zachary’s season extended into October. He wasn’t called up to the Padres. He was part of the Big Red Machine.

Zachary was supported by Perez, Rose, Morgan, Bench, Foster, Concepcion, Geromino and Griffey. He had the deepest bullpen in the game saving his starts. Zachary started Game 2 of the 1976 NLCS. He pitched 5 innings and was hardly dominant. But the Reds lineup scored 6 runs off of the Phillies and Pedro Borbon saved it and he got the win.

Zachary pitched into the 7th for the Game 3 win in the World Series and a day later, the Reds were the World Champs again.

Pat Zachary was a young World Champion. Part of that was by his work. He pitched well up through the Reds farm system and did the job well. Part was because of circumstances beyond his control. He was drafted into a team that was already an All Time great squad.

That is similar to how we live our lives. Part of our success or failures are based upon our work and effort and some is based upon factors beyond out control.

In 1977, Zachary got off to a rough start, losing 7 of 10 decisions and seeing his ERA soar to 5.04. But then he was sucked into a vortex of circumstances beyond his control.

A public contract dispute between Tom Seaver and the Mets management in 1977 got ugly and the most popular player in franchise history was traded out of spite.

The Reds, off to a let down of a start after back to back titles, tried to get a boost for their team with a new superstar. So Tom Seaver became a Red. The key part of the trade for the Mets, beyond venom, was bringing in defending Rookie of the Year Pat Zachary.

Zachary did not pitch badly over the second half of 1977 and actually was named to the 1978 All Star Game. But injuries an ineffectiveness hurt him in 1979.

But his decent pitching did not matter. He was NOT Tom Seaver, who continued to dominate with Cincinnati. As the Reds won the Division in 1979, Zachary played only 7 games. Zachary became a symbol of Mets mismanagement and the loss of their beloved player.

Eventually Zachary became a Dodger and pitched well out of the bullpen for the 1983 NL West champs as Tom Seaver returned to the Mets for one season.

But in a way, Zachary shows how the universe unfolds. Somethings we control, others we can’t. Some parts of the perception people have of us are based on effort and others are based on factors that have nothing to do with us.

Zachary was a World Champion and a pariah, all the while having a nice career that he could not totally control.