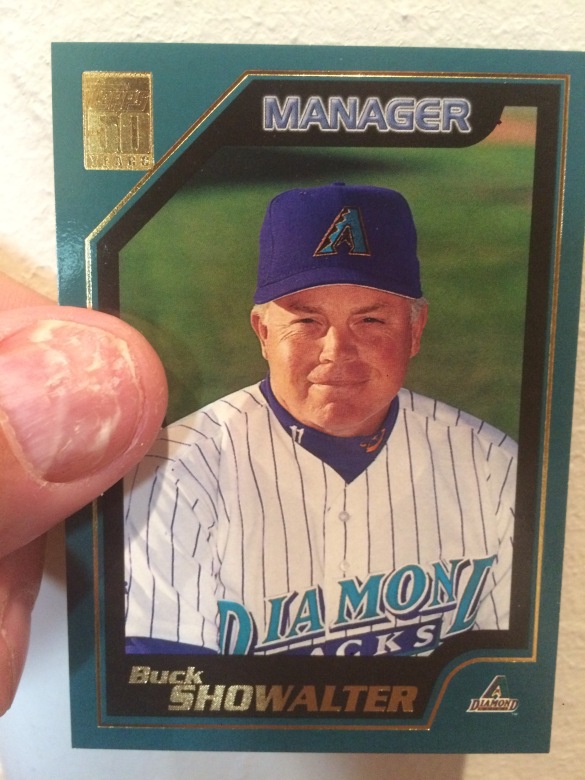 People in baseball who succeed in New York tend get higher praise than those who succeed elsewhere.

New York is the biggest city in the country and one with a rich baseball tradition from Alexander Cartwright to Aaron Judge.

The pressure is white hot in New York to succeed but the love and adulation never ends when you do.

That makes me think of Buck Showalter. He has become kind of a vagabond in baseball. A wandering figure like Clint Eastwood in the Spaghetti Westerns or like Larry Brown in basketball. He goes from place to place, has success but is gone before anyone realizes what he has done.

And if not for labor strife in 1994 and a rally by the Mariners in 1995, he might have been one of the great figures in New York baseball history.

William Nathaniel Showalter III sounds like someone who should be a Harvard legacy and living in a mansion with old money.

Buck Showalter sounds like a baseball lifer. That’s what he is.

He got the nickname Buck because he tended to sit around the minor league clubhouse Buck Naked. That’s one to go on.

His original nickname was Nat, for Nathaniel. Nat Showalter is ok. Buck is better.

He was a minor leaguer in the Yankees organization but never made it to the show in the late 1970s and early 1980’s. But he worked he way up as a minor league manager. He managed in Oneonta, Fort Lauderdale and Albany for the Yankees, winning Minor League Manager of the Year in 1989.

But the late Stick Michael put the organization man in charge. With Steinbrenner suspended, the Yankees were able to build from within. That included a manager who worked with many of the young players in the minor leagues.

Think about that. The Yankees were not even contenders in 1989, 1990, 1991 and 1992. That’s a Presidential term of losing seasons every year. So the fact that the Yankees challenged the mighty Toronto Blue Jays in 1993 was a huge change and Showalter was given much of the credit.

In 1994, everything lined up. The Blue Jays veterans faded and the Yankees stormed out to the lead. By mid August, they were 70-43 and playing .619 ball. They were on pace to win 100 games. Don Mattingly was finally going to have a post season.

Wade Boggs was having a renaissance. Jimmy Key was a Cy Young contender. Paul O’Neill was a batting champ. Danny Tartabull and Mike Stanley provided power. And a young centerfielder named Bernie Williams was coming onto his own.

Then the strike hit.

Buck Showalter won the Manager of the Year Award but there was a sense of emptiness. Was 1994 the last great chance for a Yankee title in the new decade?

In 1995, the Yankees were slumping in August and then caught fire. They won the Wild Card on the final day of the season and took a 2-0 series lead in the Division Series against Seattle. But Randy Johnson won Game 3 and the bullpen imploded in Game 4.

Game 5 was an all time classic and the Yankees had the lead in the 11th inning and needed 3 outs to advance to the ALCS to face the Indians. There was a chance to win the title lost in 1994. But Showalter was reluctant to use John Wetteland after his meltdown in Game 4, so Jack McDowell pitched the bottom of the 11th.

Joey Cora and Ken Griffey Jr. got hits and Edgar Martinez doubled into the left field corner, scoring both and eliminating the Yankees.

Showalter was let go and Yankee fans howled. This was a great Yankee manager from within the organization and Steinbrenner was back to his old meddling ways after his suspension was over. Mike Francesa of WFAN screamed on the radio that the Yankees were now at least a decade away from winning again.

Showalter began to wander in the wilderness. The expansion Arizona Diamondbacks signed him to basically design the team to his liking. They played their first season in 1998 and by 1999, with the help of Randy Johnson, were a 100 win team and in the playoffs. But eventually he rubbed management the wrong way and he was let go after the 2000 season.

Bob Brenley came in. The Diamondbacks won the World Series the very next year. Imagine if the Arizona vs Yankees World Series was Buck vs. Torre.

He helped rebuild the Rangers but again was let go before Ron Washington got the glory of back to back pennants. He reshaped Baltimore and got them into multiple post seasons. But in the end, his only October triumph was winning the 2014 Division Series for Baltimore over Detroit. His Orioles were swept by the Royals in the ALCS.

Had the Yankees won in 1994, would have been a Yankee for life? Would the title he brought to New York be enough cover to give him the immunity from firing that Joe Torre had for all of those years?

Would Yankee history have been totally different had they advanced in 1995 to face Cleveland in the ALCS?

Showalter is a terrific and decorated manager. If he ever does win a World Series title as a manager, all of what I just wrote would be prologue for a potential Cooperstown run. He would be looked on as a Johnny Appleseed of success, bringing Octobers to different markets.

He has been named Manager of the Year in three different decades (1994, 2004 and 2014.) Imagine if he could claim that AND a World Series title in New York City.

That is how legends are created.