Roy Halladay, the best pitcher of his era, suddenly died. I pay my respects to him. Plus I talk about a crowded Hall of Fame ballot and a Veterans Committee that blew it.

Giving credit where it is due this Episode of Sully Baseball.

END_OF_DOCUMENT_TOKEN_TO_BE_REPLACED 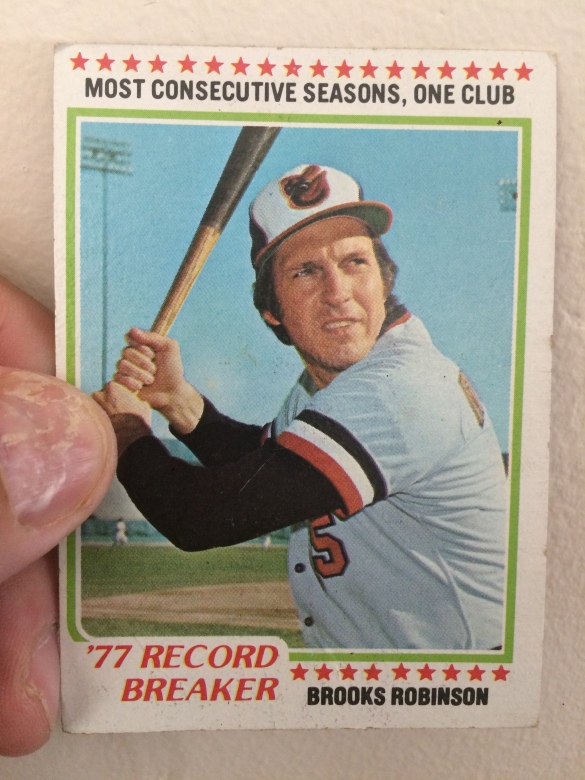 Ever have a conversation with someone who was really interesting and engaging, but you REALLY had to go?

Ever feel badly that you had to break off the chat, because they looked like they were really enjoying talking to you, and you awkwardly waited for the pause in the story to say “I really have to go”?

I am sure you have.

I had that experience with Brooks Robinson, one of the greatest third basemen in baseball history.

I never saw him play. This 1977 Record Breaker card issued in 1978 tells of how he spent 23 years, all with Baltimore. That was a record of most consecutive seasons for one club. Carl Yastrzemski would later match those 23 years but as of this writing, nobody has topped it.

Oh there have been players who played MORE than 23 seasons, but they all played for multiple teams.

Robinson arrived in Baltimore in 1955, their second season after moving from St. Louis. He was 18 years old and only got in 6 games. That was when my parents were kids. He kept playing until I was collecting baseball cards.

He was the starting third baseman in 1958 at age 21 and by 1960, he was an All Star, a Gold Glove winner and finished third in the MVP vote.

Like Ripken, he would play every day. There is something about those Baltimore infielders. In 1964, he led the league with 118 RBI, batted .317 in a pitchers era and won the MVP.

By 1966, the Orioles were in the World Series. Now to understand the significance of that, their franchise used to be the St. Louis Browns. They were the worst franchise in baseball year in and year out. Only once did the Browns make the World Series. That was in 1944 when most of the good players were fighting in World War II.

They were a joke and never had won a title. The pennant won in Baltimore in 1966 was the franchise’s second since the first World Series in 1903.

Brooks was matched up with another Robinson, Frank. As far as I know, they are not related. As Frank won the Triple Crown and the MVP, Brooks hit 23 homers and continued to play sparkling defense.

The two Robinson’s teamed up in the first inning of Game 1 of the 1966 World Series. Facing Don Drysdale and the heavily favored Dodgers, Frank Robinson homered to give the Orioles and early 2-0 lead. Brooksie was up next and homered to put the Dodgers down 3-0 before they even came up to bat.

The Orioles pitching was superhuman in the World Series. The Dodgers did not score a single run in Games 2, 3 or 4 and the Orioles swept.

Brooks Robinson turned the 1970 World Series into a personal highlight reel. He stole extra base hit after extra base hit with his dazzling defense at third. He earned the nickname “The Human Vacuum Cleaner.”

Not to be outdone by himself, he batted .429 with a slugging percentage of .810 and a 1.238 OPS with 2 homers and 6 RBI. Robinson was named World Series MVP as Baltimore won the second title in franchise history in 5 games over Cincinnati.

In 2002, my friend Steve Rosenthal invited me to join him at an event at the American Museum of Natural History in New York. The Baseball Hall of Fame was doing a traveling show of some of their exhibits. Steve was writing a story about it for AOL Sports and he had me take a few photographs for him.

Basically it was an excuse for me to meet a bunch of Hall of Famers, knowing I would really appreciate it.

I met Ozzie Smith, Phil Niekro, Red Schoendienst, Bob Gibson, Tony Perez and Juan Marichal. The crowds around Hank Aaron and Dave Winfield were too big and I left them alone. Sparky Anderson was quite funny as I asked him about his cameo on WKRP in Cincinnati.

They had a station where there were hot dogs from the different stadiums. I went over there. Brooks Robinson was there as well. I was munching on a Dodger Dog. Brooksie was enjoying a corn dog. I struck up a conversation with him and a few other people joined in.

He was loud, positive and an extrovert. He was talking about memories playing, tough pitchers he faced and, to my delight, he was talking about current players. At least in 2002, Brooks Robinson was following the game and knew the players and had respect for them.

That year, the Braves planned to move Chipper Jones to the outfield and insert Vinny Castilla at third. Robinson hated that. He felt a kinship with Chipper, also an MVP third baseman, and he thought someday he might join all the Hall of Famers if he stayed at third.

He talked about Chavez of the A’s and his picks for the 2002 season.

Eventually the other people left the conversation and it was just me and the MVP of the 1970 World Series chatting. I was shoving a bratwurst from Milwaukee down my throat while Brooksie had another corn dog.

He just kept talking. Brooks Robinson was a never ending reservoir of anecdotes and memories.

Steve beckoned me. I needed to help him and take a few pictures. But 29 year old Sully was talking with Brooks Robinson.

I did the whole mouth open, finger up, inhale “I need to go” gesture.

“Could never hit that knuckleball…”

“Man those A’s teams were tough!”

“Those fans in Baltimore were something.”

Eventually I was able to interrupt him long enough to excuse myself. I’d probably still be standing there.

It isn’t often that I am having a conversation with a Hall of Famer. It is even less frequent that I basically have to ditch them. 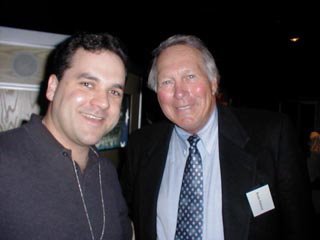