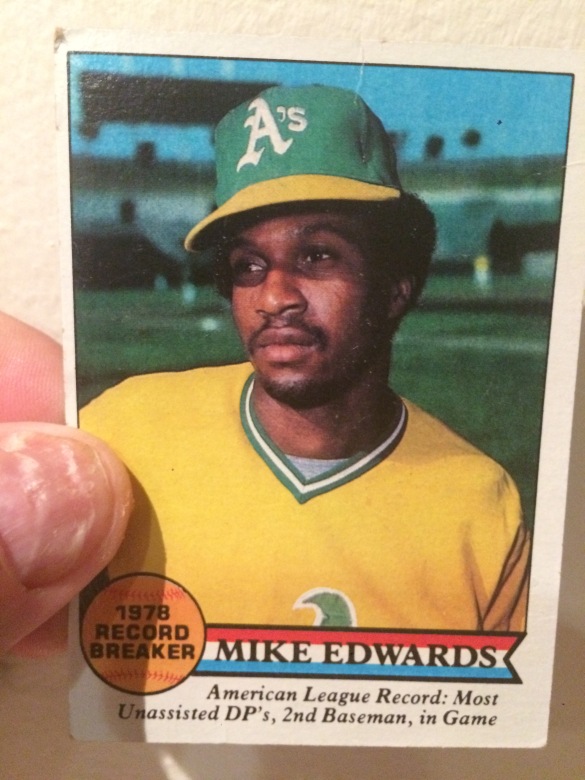 You never know what you are going to see when you go to the ballpark. An unlikely pitcher could throw a no hitter. A hitter could go on a four homer rampage. A wild comeback could turn the game around in the 9th. The game could fly by in less than 2 hours. The game could go into the 20th inning.

In an August game in 1978 at Oakland between the A’s and the Angels, a handful of fans witnessed a record being broken.

It is safe to say the few who were there had no clue what they witnessed. And Mike Edwards that day put his thumbprint on baseball history and had the greatest game of his short career.

In the years between the A’s championship run in the mid 1970’s and the arrival of Billy Martin, the Oakland team was in flux. They consistently put a poor product on the field and could not draw anything near a million fans for an entire season.

On August 10, 1978, however, the A’s were surprise contenders. They were 60-56 and only 4 1/2 games behind the Royals. They were closer to first place than the eventual World Champion Yankees were.

That day in Oakland, the A’s were playing another surprise team, the California Angels who were only 1 1/2 games  behind Kansas City.

There were only 3,832 fans attending the day game that Thursday afternoon. The A’s fans did not witness a pretty game for their team. In the first inning, Matt Keough was getting roughed up. Don Baylor, a former Oakland player, doubled home Ken Landreaux and Carney Lansford to give the Angels 2 runs before the A’s even came to bat.

Joe Rudi, once a beloved Oakland star, came up for the Angels with a runner on second and one out. He hit a liner to A’s second baseman Mike Edwards. He caught it and stepped on second to double up Don Baylor to finish the inning.

By the 4th inning, the A’s were behind 5-1 and already dipping into the bullpen. The first 8 batters in the 4th reached. Three pitchers could not record a single out. The A’s were down 10-1 with the bases loaded and nobody out.

Reliever Craig Minetto faced Dave Chalk. He lined a shot to second base and Edwards snared it. He stepped on second to double off Danny Goodwin. The inning would end with Oakland still trailing 10-1. They cut it to 10-5 in the 6th but the Angels rallied again and won 16-5. The A’s would lose 37 of their next 46 games and fall out of contention.

As the dejected fans left the stadium, I wonder how many of them realized they saw a record being set. For the first time ever in an American League game, a second baseman made two unassisted double plays in the same game.

Two National Leaguers in the 19th century, Davy Force and Claude Ritchey, had pulled the feat off and the Angels Luis Alicea would match them in 1997.

Edwards, who was acquired from the Pirates before the 1978 season. He was the regular second baseman for the 1978 and 1979 before playing his final year under Billy Martin in 1980.

Edwards played 2 years in Mexico and a year in Japan before finally retiring. He may not have had a long big league career, but he has set a record that has never been broken, which is not a bad legacy to leave.