I want Shohei Ohtani to sign with a team to let him bat and pitch. The Angels would be a great fit for him. Meanwhile I urge the Angels to either bat Pujols 9th or to cut him.

Giving credit where it is due this Episode of Sully Baseball.

END_OF_DOCUMENT_TOKEN_TO_BE_REPLACED 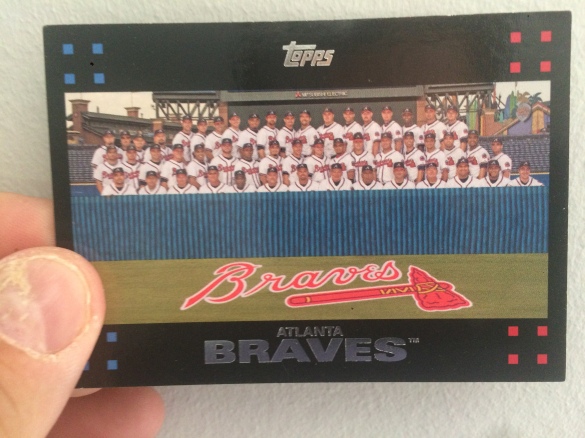 This Brave team came in that strange neutral zone towards the end of Bobby Cox’s career.

From 1991 to 2005, the Braves won every division for every completed season. I have to phrase it as such because 1994 did not have an ending and the Montreal Expos were running away with it.

Year in and year out, the Braves could lose key players and not lose a beat.

Steve Avery was an ace for a while. He left. Nobody blinked. Charlie Liebrandt was the steady veteran for the 1991 and 1992 pennant winners. So long. Greg Maddux and Tom Glavine were the Hall of Fame faces of the organization. Bye bye! We’ve got Divisions to win!

Then in 2006, the magic wore off. The team failed to make the playoffs.

On the surface, they looked like they had a good team. Young Brian McCann had a terrific season at catcher. Chipper Jones, Jeff Francoeur, Adam LaRoche and Andruw Jones all put up solid power numbers. Edgar Renteria had a bounce back season after a let down in Boston. Plus Matt Diaz and Wilson Betemit gave them a good bench.

The rotation, while not as great as they were in the mid 1990’s, still had John Smoltz and Tim Hudson giving them over 200 solid innings each and a nice season from young Chuck James. In limited work, closer Bob Wickman posted a 1.04 ERA.

How did they finish with a losing record? A rough April gave way to a solid May. Going into June, they were fluctuating between 3 1/2 and 4 1/2 games of the Mets and the inevitable post season trip.

Then they lost 21 of 27 games in June, finishing the month 12 games under .500. They were 13 1/2 games behind the Mets. They were 11 games out of the Wild Card and only lowly Washington kept them out of the basement of the NL East.

What killed the Braves was a 19-33 record in one run games. Even a .500 record in those games would have added 7 wins to their final. An 86-76 record would have put them just 2 games behind the Dodgers for the final Wild Card spot.

What I DO know is this is a strange team picture. What the hell is that little wall in front of the team. Is it carpet? Is it sheet metal? Are they nude behind it? Was it added in?

It is bizarre. I do not recall a team picture, from Little League to the majors that does that. I could be wrong.

Fortunately, it is NOT a beloved Braves team so I doubt this picture is hanging in the garage of many Georgians.