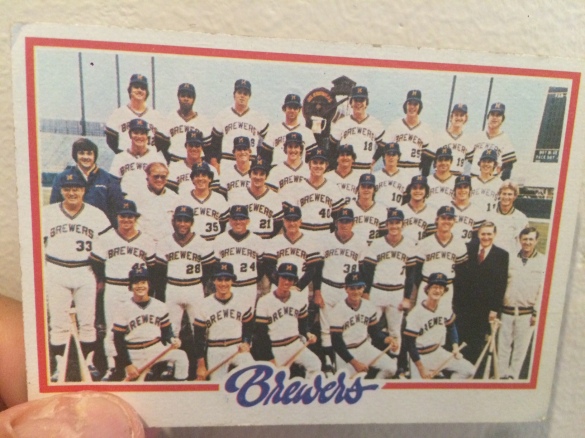 I love the name “Brewers” for the team in Milwaukee. It is great on so many levels. First of all, it is my favorite type of team name. It ties directly into the history and culture of the city they play for. I prefer a name like that to a generic “Tigers” or “Eagles.”

It also has a tie to the history of baseball in Milwaukee. The team that is now the Baltimore Orioles and once were the St. Louis Browns once played in the Western and then American League as the “Milwaukee Brewers.”

The American Association had a Milwaukee Brewers at the beginning of the 20th century. They were the team of the city until the mid 1950’s when the Braves moved from Boston and Milwaukee became a big league city.

Now truth be told, I would rather have seen the Braves stay in Milwaukee and another team find its way to Atlanta. The Braves had a great glory period in the 1950’s, winning the 1957 World Series title, back to back pennants and nearly making in 3 straight.

But those titles are lost to history in a way because the team moved to Atlanta and they are now intertwined with the South. Henry Aaron had his best seasons in Milwaukee. Warren Spahn starred there as well. So did Eddie Mathews. And yet their deeds, like the titles won by the Philadelphia A’s and the pennants from the Washington Senators and New York Giants, have somewhat faded.

I can not put the toothpaste back into the tube. The Braves did indeed move. And despite overtures to move the White Sox to Milwaukee in the late 1960’s, no MLB team played in County Stadium until 1970.

We may never know exactly how corrupt the deal was that dragged the Seattle Pilots to Milwaukee just before the 1970 season. It involved Bud Selig, so you know it wasn’t on the up and up.

But when the Majors returned to Milwaukee, there was no way they were going to be the Milwaukee Pilots. Selig and his conspirators dubbed them the Brewers and here we are.

This picture shows the 1977 squad. It was the last year their hat was the simple “M” and before they adopted the amazing M-B glove design. It was also the year before the arrival of GM Harry Dalton and manager George Bamberger, two people who were instrumental in the rebuilding of the team.

Some players who would eventual play in the 1982 World Series were already on the 1977 roster. Future Hall of Famer Robin Yount was already the starting shortstop. Charlie Moore and Cecil Cooper were in the lineup. Mike Caldwell and Moose Haas were already pitching there.

The 1977 team, helmed by Alex Grammas, was a 95 loss team. The 1978 team was a 93 WIN club. Nobody noticed because they shared a Division with the Yankees and Red Sox. But they were becoming contenders.

Oh yeah, one more toothpaste and tube scenario. I wish the Brewers could be an American League team.

But Brewers remains a great name. And a great detail of the old stadium is in the background of this picture. I love the giant barrel of beer in the back that existed in centerfield.

No better tribute to the city of Milwaukee.