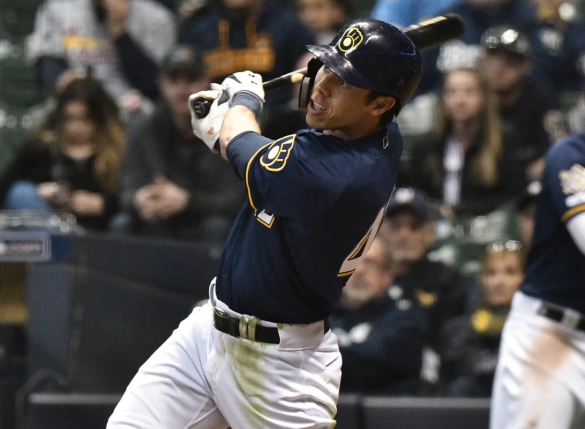 Trevor Bauer pitched into the 7th, striking out 8 Mariners in 6 2/3 innings, earning the 6-4 decision for Cleveland.

Joey Gallo had 3 hits, including a homer, driving in a pair to lead the Rangers past the Angels in a wild 12-7 game.

Clayton Kershaw shook off Puig’s early homer to throw 7 innings, walking no Cincinnati batter while striking out 6, setting up the Dodgers 4-3 walk off victory.

Christian Yelich homered 3 times, driving in 7 and added a walk as the Brewers out slugged the Cardinals, 10-7.

Edwin Encarnacion went 2 for 4 with a homer but the Mariners lost again, this time to Cleveland, 6-4.

Paul Goldschmidt reached base 4 times, including a homer, but the Cardinals came up short against Milwaukee, 10-7.

Adam Morgan threw a pair of key shutout innings in relief for the Phillies, but the Mets would win 7-6 in the 11th.

Martin Perez allowed 1 run over 6 solid innings but did not fare in the decision as the Twins fell to Toronto, 5-3.