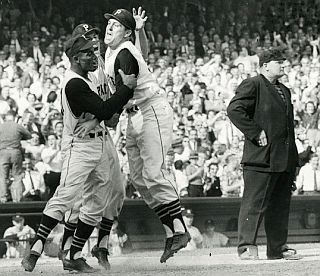 The seventh game of the 1960 World Series was a wild and dramatic game that was going to be remembered for all time no matter what the outcome was. As it turned out, it featured one of the most memorable home runs in baseball history. Bill Mazeroski’s blast became the first ever World Series ending homer.

If a few tiny details had changed, the game would have been forever remembered as “The Hal Smith Game.”

In 1960, the Yankees returned to the World Series after a one year absence and looked to capture the title with pure power. They slugged their way to 16-3, 10-0 and 12-0 victories over the Pirates, who won their first pennant since 1927, a year they were swept by the Babe Ruth led Yankees.

However, while the Yankees won the blow outs, the Pirates took the close games, sneaking off 6-4, 3-2 and 5-2 victories. In virtually every statistical category, the series was lopsided in the Yankees favor, but it still went to a deciding Game 7.

The Pirates used a platoon of catchers in 1960. Smoky Burgess caught games against right handed starters. Journeyman catcher Smith did so against left handers. Lefty Whitey Ford was not available for the finale as he won Game 6 for the Yankees. Bob Turley was the Yankees starter meaning Burgess got the call to catch for the Pirates and Smith rode the bench.

From the beginning, it was clear this was not going to be a pitchers duel. Pirates first baseman Rocky Nelson homered in the first and when Burgess singled in the second, Bob Turley was lifted after only retiring three batters. Pittsburgh built a 4-0 lead.

The Yankees came storming back with homers by Moose Skowron and a three run homer by Yogi Berra, playing left field that day, and took a 5-4 lead in the sixth.

Burgess singled in the seventh and was the tying run with nobody on. He was lifted for pinch runner Joe Christopher but the Pirates could not drive him in.

In the 8th, Smith filled in as catcher. The 29 year old reserve was not even the most famous active catcher named Hal Smith. The Cardinals had an All Star by the same name which this author thought was the same person before doing the research for this post.

Calling pitches for reliever Roy Face, Smith saw the Yankees pad their lead. Johnny Blanchard and Clete Boyer each smacked RBI hits and New York led 7-4 and seemed to be pulling away.

In the bottom of the 8th, Gino Cimoli singled and Bill Virdon smacked a grounder that hit Tony Kubek in the neck. After a delay, Kubek was replaced by Joe DeMaestri.

Dick Groat singled, cutting the Yankee lead to 7-5. Then with two outs, Roberto Clemente beat out a grounder that made it a one run game.

Up stepped Hal Smith against reliever Jim Coates. With 2 outs, the count 2 and 2 and Casey Stengel’s Yankees 4 outs away from taking yet another title, Smith smashed a deep home run over Yogi Berra’s head in left field.

Suddenly the Pirates had a 9-7 lead. Forbes Field went insane as the reserve catcher had struck the blow that looked to slay the Yankees once and for all. The Pirates had not won a World Series since Pie Traynor and company stunned Walter Johnson the Washington Senators in 1925. Now, 35 years later, they were on the verge of another stunning game 7 victory and Hal Smith would be the man to lead the way.

Bob Friend came in to close out the World Series, but allowed a pair of singles without retiring a batter. Harvey Haddix, who famously threw 12 perfect innings in a 1959 game before losing in the 13th, relieved Friend. He coaxed a foul pop up to Smith. In a strange play with one out, Yogi Berra grounded out to first and Mickey Mantle appeared to be caught in a potential World Series ending rundown. But he dove back to first in time and Gil McDougald scored to tie the game. The lead that Hal Smith gave the Pirates was no more because of Mantle’s dive back to first. Haddix retired Skowron but now the game was knotted at 9.

Bill Mazeroski faced Ralph Terry to lead off the bottom of the 9th and hit a 1-0 pitch over the left field fence to end the World Series. Forever the game was known for Mazeroski’s homer. Any montage of great World Series moments includes Mazeroski’s homer. The fame of that moment probably was the event that clinched his Hall of Fame bid.

But think of how close it was to being Hal Smith’s moment in the sun. He would have been the great hero on the cover of magazines and whose blast would be remembered for all time. Devoted Pirate fans love and applaud Hal Smith’s heroism. However his deeds were so close to being immortal.

For that reason he is the Sully Baseball Unsung Post Season Hero for October 13. 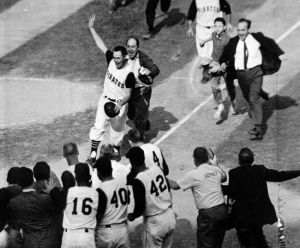 Today is the 50th anniversary of Bill Mazeroski’s homer that ended the 1960 World Series. I’ve seen pictures and clips of it since I was a kid. And I’ve always been struck by something in this famous celebration picture.

There were kids running up to congratulate Mazeroski. There were also his teammates. Then there is a blue collar guy right behind Mazeroski.

Then… there’s this guy. 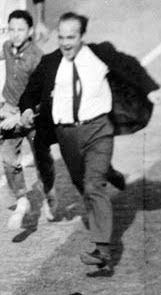 The guy in the suit and tie, running along side the kids.

The guy dressed like someone who should be at work that Thursday afternoon.

The guy who is balding with a bit of a belly, but is as happy as can be rushing the field.

These days, they get the tazer gun out when you rush the field.

Back then? You can be a business man and no one will stop you.

It’s an early 60s business man. Clearly not a Don Draper, but possibly Freddy Rumsen (before he peed his pants.)

I figured out that in 1960, this guy was probably old enough to remember the 1925 World Championship season for the Pirates and the 1927 NL Pennant winners… and probably never thought he’d see another Pirates champion again.

And when they did win… he was a kid again.

He’s probably not with us anymore, but if he did pass, he no doubt savored the Pirates titles in 1971 and 1979.

I wonder what he expected to do when he caught Bill and was part of the group hug at home plate?

Watch the video of the homer… you can see him at third base and running right into the scrum.

If you know who he is… shoot me an e mail at info@sullybaseball.com. 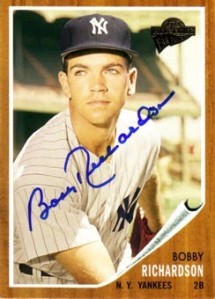 Did you know that Bobby Richardson is the only person to win the World Series MVP for a losing team?

I knew that, but I’m Sully and my brain is jam packed with stuff like that which won’t help me get a new job.

But I figured out something else that is interesting (at least to me) regarding that World Series MVP from 1960.

He is the only second baseman to ever win the World Series MVP. If the 2010 World Series comes and a player from any other position drives home the MVP’s car, then we’ll have 50 years without a World Series MVP at second.

I know it isn’t an earth shattering concept, but it struck me as odd.

Since 1973, we’ve had every single position covered. 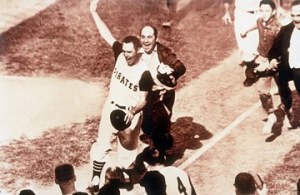 But you have to go all the way back to 1960 for someone at second.
And come to think of it, that 1960 World Series was a damn good one for second basemen.

In the years since 1960, some second basemen have had World Series glory. Some were Hall of Famers… others were nobodys who shone on the big stage. 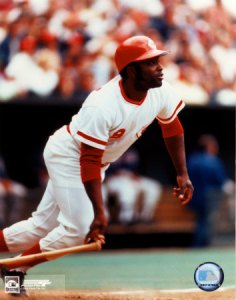 Future Hall of Famer Joe Morgan got the game winning hit of Game 7 of the 1975 World Series with 2 outs and 2 strikes in the 9th inning. 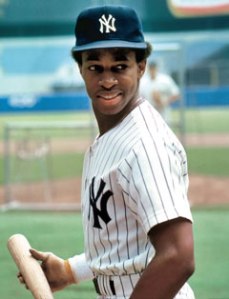 Willie Randolph homered off of future Hall of Famer Don Sutton in the Yankees Game 1 win in the 1977 World Series. 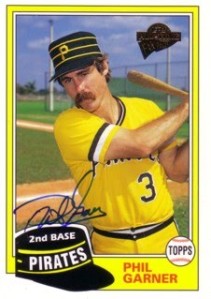 Phil Garner batted an eye popping .500 with a 1.238 OPS in the 7 game World Series of 1979. Only Willie Stargell’s heroics kept him from being the second second baseman to win the World Series MVP

Perenial All Star Davey Lopes started key rallies in Games 3, 4 and 6 of the 1981 World Series to help the Dodgers come from behind and beat the Yankees. 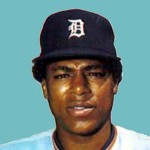 Tiger great Lou Whitaker helped set up several rallies in the 1984 World Series including being on base for both of Alan Trammell’s game 4 homers.

Frank White homered and drove in 3 runs to help the Royals escape a 3-0 hole in Game 3 of the 1985 World Series. 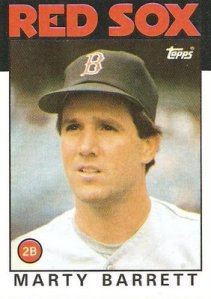 In a losing cause, Marty Barrett got 13 hits, batted .433 with an OPS of 1.014 for the Red Sox in the 1986 World Series. He would have been the MVP of the Series had that 10th inning gone differently for the Sox. 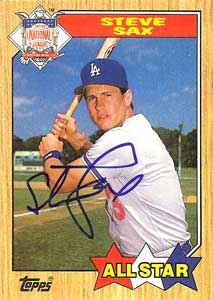 Steve Sax batted .300 in the Dodgers stunning victory over the A’s in the 1988 World Series. His walk started the Dodgers first inning rally off of Dave Stewart in Game 4 that helped put the Dodgers in control of the series for good. 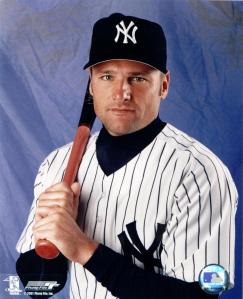 Chuck Knoblauch batted .308 in the 1991 World Series for the Twins. He helped start the decoy play in Game 7 to fool Lonnie Smith and set up the series winning run with a sacrifice bunt. Later with the Yankees he hit game tying homers in the 1998 and 1999 World Series. 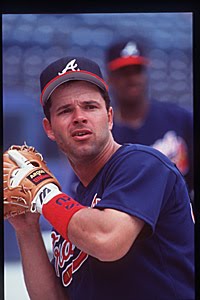 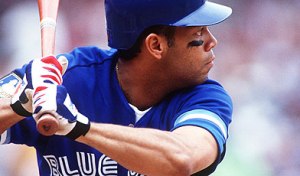 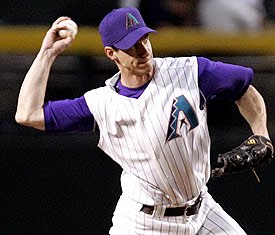 Craig Counsell was involved with two World Series Game 7 come from behind victories. He tied Game 7 of the 1997 World Series in the 9th inning with a sacrifice fly and scored the title winning run for the Marlins in the 11th inning. In 2001, he was hit by a Mariano Rivera pitch setting up Luis Gonzalez’s single that won the World Series for the Diamondbacks. 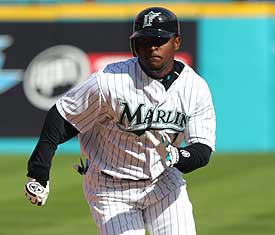 Luis Castillo drove in the first run of Game 6 of the 2003 World Series with a 2 out RBI single. It would turn out to be the World Series winner as the Marlins held on to a 2-0 victory. 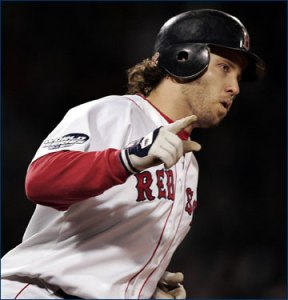 Mark Bellhorn hit the game winning homer in Game 1 of the 2004 World Series. He also helped the Red Sox win Game 2 with a 2 run double off the center field wall. 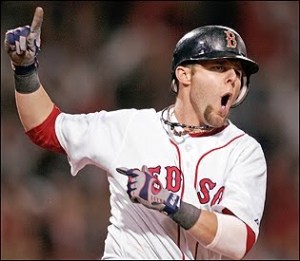 Dustin Pedroia led off the 2007 World Series with a home run, setting the stage for the Red Sox sweep of the Rockies. 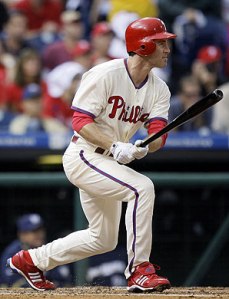 Chase Utley hit a 2 run homer in the first inning of Game 1 of the 2008 World Series that gave Cole Hamels all the run support he needed. In the 2009 World Series, he matched Reggie Jackson’s record of 5 home runs.

Who knows? Maybe Utley or Pedroia could win the World Series MVP this year. Maybe Robinson Cano will win it for the Yankees. Maybe the Rays make it back to the series and Ben Zobrist will win it. Perhaps Dan Uggla, Ian Kinsler, Howie Kendrick, Ian Stewart or Rickie Weeks will win some hardware.

Or maybe we’ll have to deal with 50 seasons without a second baseman winning the World Series MVP.

We may have to cope.

Meanwhile, enjoy the glory that is the 1960 World Series, the last glorious series for second basemen!