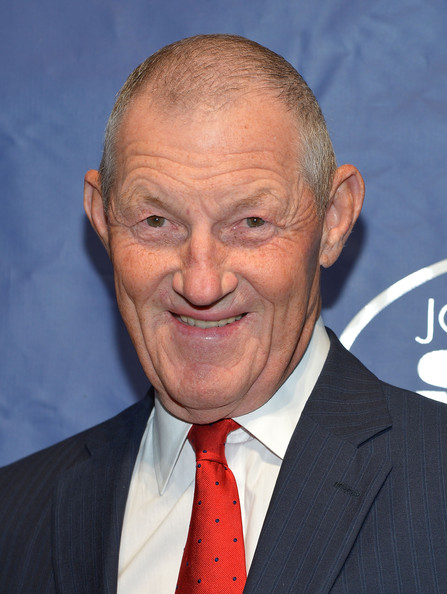 It is September and a bounce here or a bounce there will be the difference between playing in October or not. The Brewers get that and are fortifying their team in any way they can.

Please forgive my cynicism but..the only thing ‘team’ about many MLB teams now is the laundry..proud to be a member of the 1965 Twins and 1982 Cardinals.Both went to the WS WITHOUT USING A PLAYER FROM OUTSIDE THE ORGANIZATION.real teams,real baseball..earned our ring,didnt buy it

Not only does it make Kaat look like a factually incorrect bitter old man, but it also illustrates a problem of how MLB markets and presents itself.

Appreciating yesterday AND today in this episode of Sully Baseball.

While we are at it, enjoy the NEW In Memoriam video.

END_OF_DOCUMENT_TOKEN_TO_BE_REPLACED 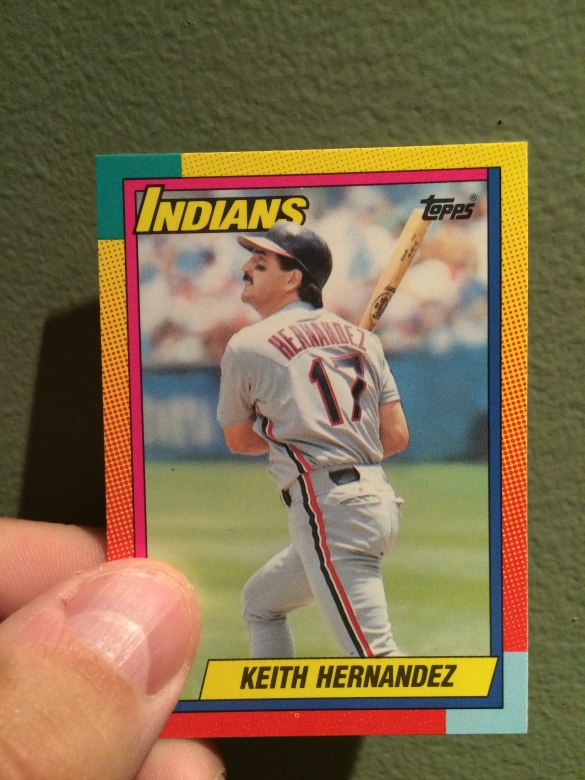 First and foremost, Keith Hernandez did NOT hang himself. That was Aaron Hernandez. A Canadian newspaper mistakenly called Aaron “Keith” in a headline regarding the suicide of the Patriots player in jail.

In case you are getting your news from this blog, I wanted to make sure you were informed.

Now on to this card.

Keith Hernandez finished his career with the Cleveland Indians. It looks strange doesn’t it? Didn’t it seem like he was mainly a Met in his career? Actually he won a Co-MVP as a Cardinal and got his first World Series ring in St. Louis. Maybe he should have been a Cardinal for his whole career.

But if he did stay in St. Louis for his whole career, he would never have appeared on Seinfeld.

“Mex” was raised in the San Francisco Bay Area. Actually he was not of Mexican descent but actually Spanish on his dad’s side. But Mex is still a cool nickname. He played little league on the Peninsula where one of his teammates was Bob McClure. Those two would meet later in life.

While playing for the College of San Mateo, he was drafted in the 41st round of the 1971 draft. It was one of the great draft success stories ever. 783 players were picked ahead of an eventual league MVP.

Between Single A St. Petersburg and Double A Arkansas, Hernandez was OK but hardly a can’t miss star when he started his minor league career.

He led the league in batting and doubles and runs scored and finished with a .930 OPS and 105 RBI and did so with only 11 homers.

Willie Stargell was the emotional leader of the eventual World Champion Pirates that year but he was forced to share his MVP with Hernandez, whose actual stats dwarfed the accomplishments of “Pops.”

Hernandez continued his great hitting, Gold Glove winning defense and league leading run production through the beginning of the 1980’s, where he was named to the All Star Game again.

But all was not well. Manager Whitey Herzog kind of hated his star first baseman. He felt there was a lack of hustle from him and oh yeah, Hernandez loved cocaine. Lots of people loved cocaine in the 1980’s, but Herzog thought it was a distraction.

As the Cardinals were defending their World Series title, Hernandez was dumped to the Mets for Neil Allen and Rick Ownbey in the middle of the 1983 season. Needless to say, the trade was a bad one. The bad blood between Herzog and Hernandez helped fuel the heated rivalry between St. Louis and the Mets in the mid 1980’s.

Hernandez flourished with the Mets on the field and at the plate and with the fans. He made the All Star team in 1984 and hit above .300 in his first 4 seasons with New York. And the perennial losers in Queens suddenly became contenders.

His name came up in the Pittsburgh Cocaine trials along with many other high profile baseball players.I will say, these cocaine issues seem quaint compared to BALCO.

In the 1986 post season, he hit a critical double that brought the Mets to within 1 run in the top of the 9th and came around to score the tying run in the epic 16 inning clinching marathon game 6 of the NLCS.

Later in the World Series, he got the game tying hit and drove in 3 runs in Game 7 of the World Series as the Mets won and forever cemented their place in the hearts of Met fans. Hernandez was beloved by the fans inspite of, or maybe because of, his party boy image and cockiness. He was beloved by his teammates as well as the fans.

After the World Series, hard partying Hernandez and squeaky clean Gary Carter were named Co Captains of the team, but his best days were behind him.

Knee issues, hamstring problems and the emergence of younger players like Dave Magadan cut down on his numbers. After 1989, he was not given a new contract.

As this card shows, he played his final season with a young Indians team, hoping his veteran leadership would be an inspiration. He was a non factor.

His post playing career has seen him play off of his good looks and partying reputation and cocky personality as much as his baseball career. He remains a popular Mets broadcaster, does the Just for Men hair color commercials with another former New York party animal Walt Clyde Frazier and of course dated Elaine Benes.

He fell off the Hall of Fame ballot after 9 votes, only twice breaking double digits from the votes. Hernandez remains one of the beloved figures in Mets history, a relic of a fast living era of New York in the 1980s, and to the jealousy of George Constanza, a Civil War buff. 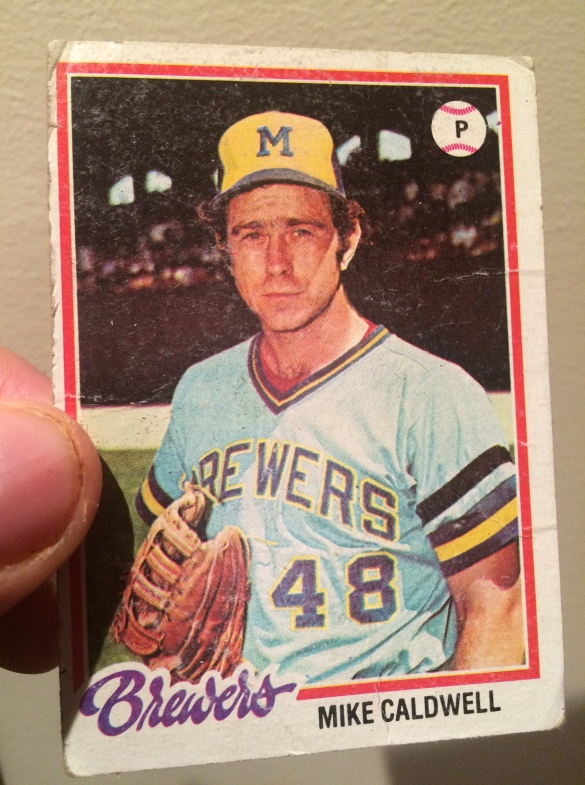 When a team loses a close playoff series, there are always forgotten heroes from the losing side. Few people remember the great play of people when they are not on the winning side and the chance to be an immortal for a fan base can slip away.

Throughout the 1970’s, Caldwell was a decent if not spectacular pitcher for the Padres and Giants. The North Carolina State grad was involved in the deal that sent future Hall of Famer Willie McCovey from San Francisco to San Diego and did his best to make the deal look good for the Giants with a solid 14-5 season in 1974, posting a 2.95 ERA.

After a bad 1976, he was dealt from San Francisco to St. Louis. He never played a game for the Cardinals as he was sent packing to the two time defending World Champion Cincinnati Reds before the start of the 1977 season. The Reds were doing a makeover, one that included the departure of Tony Perez, the break up of their bullpen and the arrival of Tom Seaver.

Before Seaver’s arrival, Caldwell was sent packing once again, this time to Milwaukee for a pair of minor leaguers who never played in the majors.

The deal was a great one for the Brewers. Caldwell finished as the runner up to Ron Guidry in the 1978 Cy Young race, leading the league with 23 complete games, winning 22 and posting a 2.36 ERA for a rising Brewers team.

As Milwaukee evolved into a contender, Caldwell was a reliable arm. He no longer was a Cy Young contender but he posted 200+ year in and year out and winning more than he lost.

When the Brewers finally won the pennant in 1982, beating a star studded Angels team in the ALCS they faced St. Louis in the World Series. (Remember, the Brewers played in the American League then.)

An exhausted Brewers staff limped into St. Louis, unable to start their ace Pete Vuckovich and they had Rollie Fingers on the disabled list.

Caldwell got the call for Game 1, facing Cardinal star Bob Forsch. Paul Molitor, Robin Yount and friends pounded Forsch and Caldwell made sure the Cardinals could not counter rally.

Caldwell finished with a complete game 3 hit shutout, giving the worn down and short handed bullpen the night off in the 10-0 final.

The Brewers and Cardinals exchanged wins and Caldwell got the ball again for Game 5 with the series knotted at two games a piece. Robin Yount got 4 hits including a homer to spark Milwaukee’s attack.

Caldwell did not dominate like he did in Game 1, but worked his way out of jams. In the 9th inning, with manager Harvey Kuenn gunshy about going to his bullpen, Caldwell took the mound with a 6-2 lead.

He got friend of the Sully Baseball Daily Podcast Lonnie Smith out but then ran out of gas. David Green and Keith Hernandez hit back to back doubles and George Hendrick singled to make bring the Cardinals to within 2. Bob McClure came in to relieve Caldwell and he worked around another single to get the save.

Caldwell would go 2-0 in the World Series, needing the bullpen for only a pair of outs and put the Brewers in position to win the 1982 title. They would go back to St. Louis with future Hall of Famer Don Sutton throwing Game 6 and eventual Cy Young winner Pete Vuckovich available for Game 7 if necessary.

The Brewers would lose both games as Sutton got pounded and the bullpen blew Game 7. Caldwell came out of the bullpen to finish the 8th inning of Game 7. Had the Brewers rallied to win, he would have won 3 games in the Series.

Instead his 2-0 performance over 17 2/3 innings and a 2.04 ERA has gone largely forgotten. Molitor and Yount’s torrid World Series hitting helped their Hall of Fame candidacy, but Caldwell has faded into obscurity.

Perhaps Yount’s .414 average and 1.072 OPS would have clinched the World Series MVP had Milwaukee took the title. But Caldwell would have received a lot of consideration and there is no doubt he would have cemented a legacy of being a beloved hero in Milwaukee.

Alas the cruel fate for those who excel on the losing side.