Mike Marshall is a name I associate with the Dodgers. And when I say that, I don’t just mean the right handed slugging outfielder on this card.

Remember there was ANOTHER Mike Marshall who won a Cy Young Award in 1974 as a reliever for the Dodgers. So whether it was on the mound in the 70’s or at the plate in the 80’s, BOTH Mike Marshalls bled Dodger blue.

And yet here is the slugger in a Red Sox uniform. He wore that in the summer between my senior year of High School and my freshman year of college. It is safe to say I was watching a LOT of baseball that year. And the Red Sox won the AL East title that year, so I was following the Red Sox kind of intensely.

I suppose intellectually I remembered he was a Red Sox player that year. But like thinking of Dan Aykroyd in We Are The World, it just seemed weird and didn’t affect anything.

Mike Marshall made his big league debut with the 1981 Dodgers. It seems like every Dodger player in history played at least one game for the 1981 World Champs. I had to double check to see if Pee Wee Reese and Clayton Kershaw were on the roster.

The Dodgers were transitioning from the star studded squads of the 1970’s to a new younger team that would be regular October players in the 1980’s.

Fernando Valenzuela was the new face of the team. Young Mike Scioscia and Steve Sax led to the phasing out of Davey Lopes and Steve Yeager. And Pedro Guerrero became a World Series hero and MVP candidate just as Ron Cey and Steve Garvey became victims to age.

Mike Marhsall was going to fit in with the new Dodgers perfectly. By 1983, the 23 year old Marshall was the regular right fielder and homered in the NLCS against the Phillies. In 1984, he was a National League All Star. He was a key source of power for the 1985 NL West champs and homered in the 1988 World Series where the Dodgers upset Oakland.

As well as being a player for the Dodgers, he also was a player in Los Angeles. Marshall was a young, good looking slugger on the Dodgers and was linked romantically to the Go Go’s lead singer Belinda Carlisle. He got the beat indeed.

After a disappointing and injury plagued 1989 season, Marshall was tangentally involved in the Mets trying to correct one of the worst mistakes in franchise history.

During the 1989 season, the Mets inexplicably tried to redefine their franchise. Contributors to the 1986 title were chucked over the side at an alarming rate. Some, like Lee Mazilli, were over the hill. But Rick Aguilera was still contributing. And Mookie Wilson, Roger McDowell and Lenny Dykstra were all still good players and fan favorites.

Dykstra and McDowell were shipped off to Philadelphia for Juan Samuel. The trde was nothing short of a disaster for the Mets, once that was magnified as Dykstra eventually led the Phillies to the World Series.

Hoping to reverse the effects of the deal and seeing the need to get the unpopular Samuel off the team, the Mets made another trade. Essentially they had traded a starting outfielder and an effective reliever for Samuel. Now they were going to trade Samuel for a starting outfielder and an effective reliever. Marshall was sent packing to the Mets along with Alejandro Pena.

It is safe to say that Marshall didn’t make anyone forget Dykstra. He was ineffective in 53 games before being shipped to Boston. He only started a hanful of games for the Red Sox down the stretch collecting a few 3 hit games along the way.

I followed every one of those games yet I have no memory of his contributions. Marshall also got an a pinch hit single in the ALCS against Oakland. Nope. Don’t remember that either.

In 1991, he played a few games in Boston and got cut. He wound up with the Angels as all players must at one point in their career.

Since then, Marshall has remained in the game in one way shape or another. He played in Japan, managed in the minors and was an executive in an independent league.

For a while, he was one of the bright young faces on a star studded and popular Dodgers team. He had the right name for Dodger greatness. It sounded strange on any other team, even on one that I was following. 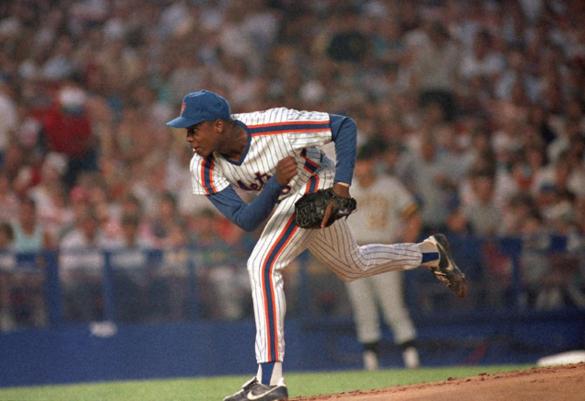 In the latest installment of The Teams That Should Have Won, I look at a franchise that has had a lot of near misses.

The Mets have lost some heart breakers and some big time stars came and went without a ring.

But the team I picked for the Mets could have built on past success and possibly could have avoided the pitfalls that would emerge in the ensuing years.

It is the second to last DAILY episode of Sully Baseball Daily Podcast.

END_OF_DOCUMENT_TOKEN_TO_BE_REPLACED

Expectations can be cruel. Sometimes they can’t unfairly paint an unflattering picture.

Former Mets infielder Gregg Jefferies seems to be an illustration of the perils of expectations.

By any reasonable metric, Gregg Jefferies was a success in baseball. He played in three different decades over 14 different seasons. He was a first round pick who became a regular in the majors. He led the league in doubles one year, was selected to back to back All Star Games and became a millionaire many times over along the way.

But alas, Jefferies came of age in the decadence and exaggeration of New York of the 1980’s. The era of The Bonfire of the Vanities and the original rise of Donald Trump was the crucible that forged Gregg Jefferies. He began as the promise of the next great New York baseball star and would leave representing the disappointing slide of a once great team.

Jefferies went to Junipero Serra High School, the same Silicon Valley prep school that produced Jim Fregosi, Barry Bonds and eventually Tom Brady. He was a first round pick of the Mets in 1985 and entered an organization that was on the verge of greatness.

The likes of Darryl Strawberry, Dwight Gooden and Ron Darling were already playing at the major league level. Players like Kevin Elster and Dave Magadan were on their way up. But the prospect that got everyone buzzing was Jefferies.

As an 18 year old, he shot all the way to Double A. As the parent team was winning the World Series, Jefferies batted a combined .353, had an OPS of .950, drove in 111 runs and posted double digit totals in home runs, doubles and triples. The young World Champion Mets had a budding batting champion developing in their farm system. The possibility of long term dominance seemed inevitable.

The build up continued in 1988 as the 20 year old Jefferies made his way to Triple A. He did not put up as gaudy numbers as he had in the previous year, but still was a solid all around hitter.

By late August he was on the big league club for good and he belonged. He batted .321 down the stretch, seeing his OPS get to .961, homering 6 times in 118 plate appearances. He was in the starting lineup for the NLCS, getting locked down playing time as Howard Johnson, Kevin Elster and Dave Magadan split other at bats.

In the playoffs, the hot hitting continued, and while the Mets did not advance to the World Series, they had a budding star.

He even had his Rookie eligibility protected and he would have a chance to win the Rookie of the Year in 1989. Jefferies looked cocky and willing to back it up. He even said he was going to take aim at Pete Rose’s all time hit record for his career.

But 1989 was a strange year in the history of the Mets and one that made their fans feel bitter that such a beloved team was tampered with.

With the Mets infield stacked, a position needed to be opened up for Jefferies. Popular Wally Backman, one of the many players who symbolized the hard fighting scrappy Mets, was shipped off to the Twins and Jefferies became the second baseman.

The Mets were prohibitive favorites to win their third NL East title in 4 years. But they did not come out of the gate blazing and found themselves trailing Montreal and Chicago for much of the season. And Jeffreies batted .176 in April and .195 in May with no homers.

As the year went on, the team started trading away more beloved players. Lenny Dykstra and Roger McDowell were dealt in a disastrous trade with Philadelphia for Juan Samuel. Mookie Wilson was shipped off to Toronto. Rick Aguilera was included in the Frank Viola trade. And the team was streaky, winning 6 in a row and losing 6, hovering near first but never leap frogging into position.

And with favorites being sent off, the slumping Jefferies became a symbol of what was wrong with the team. The scrappy hard nosed Backman, Wilson, Dykstra etc made the 1986 Mets tough and winners. And instead they had this soft kid who couldn’t hit.

He wound up hitting .324 in August and .300 in September, but it was too little too late. While he found his stroke by the end of the year, all anyone remembered was him starting a charge the mound brawl with beloved former Met Roger McDowell.

Jefferies got some Rookie of the Year votes in 1989 (he did in 1988 as well) but was looked upon as a colossal bust by the fans. He had a better 1990, leading the league with 40 doubles, but the Mets failed to make the post season again and Jefferies took the brunt with whispers that his teammates didn’t care for the cocky 22 year old kid.

In 1991, with the Mets no longer contending, Jefferies wrote a public letter defending himself to the fans. It backfired, painting him as a petulant child. That off season he was traded to the Royals in the Bret Saberhagen trade.

After an uneventful year in Kansas City he landed in St. Louis where it appeared he found a home in 1993. While he was a 6 year veteran, he was also only 25 years old and out of the New York limelight.

He made a pair of All Star teams, contended for the batting title and found his power again. Alas, the Cardinals would not give him a no trade clause and signed with the Phillies before the 1995 season. The fact that he was one of the few players signing multimillion dollar contracts during the strike/lockout was not good optics for Jefferies.

After a few good but not great years with the Phillies, he bounced around between the Angels and Tigers before injured finally had him hang up his spikes in 2000, not quite with 1600 hits.

It was a nice career, one that he can be proud of in his California baseball academy he runs. But he was supposed to be more, according to expectations, which we all know can be dangerous.