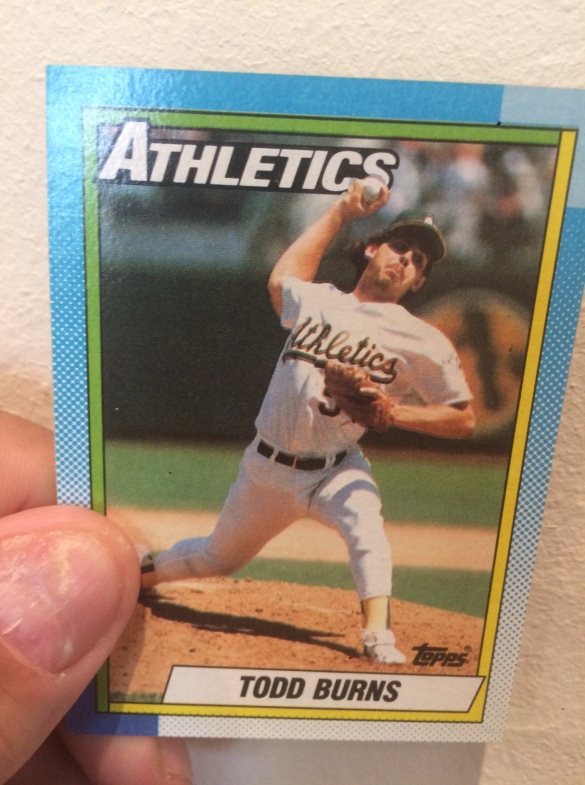 I may have mentioned this in one of my previous Card of the Day posts. Forgive me, I have written hundreds of them so far, so a detail or two might have slipped through the cracks. But during the post season, I keep track of which players have played and which players haven’t.

I guess it stems from my own lack of playing time in high school that I want everyone to get it. I personally find it sad if someone plays for a team in the World Series and you see their entry in the Baseball Encyclopedia or baseball-reference.com and see no games played in the post season.

There is a little thrill I get when the last player on the bench or in the bullpen get into the game. There was a moment in the 1988 World Series where Tony LaRussa thought similar to me regarding getting the players in. And that moment turned out to be the last observation one of the great voices in baseball history made in a World Series telecast. And it involved Todd Burns.

The 1988 A’s had an embarrassment of riches. They had a deep outfield, more infielders than they can start, their bullpen was legendary and the rotation, led by Dave Stewart and Bob Welch, was solid.

On June 18, the A’s were 42-34, already 5 games ahead of the defending World Champion Twins and 11 ahead of the Rangers, who were coming into Oakland.

That day, the A’s had recalled Todd Burns from Triple A. The former 7th round pick from Oral Roberts University had made one relief appearance earlier in the year and was basically an unknown quantity for a spot start.

He went 8 innings against a solid hitting Rangers team, allowing 1 run. He didn’t get the decision as the game went into extra innings. (Gene Nelson, who I wrote about a few days ago threw 3 1/3 shutout innings for the walk off win.) But it was quite an impression for Burns.

His next appearance he threw 10 innings. Once again did not get the decision but set up another walk off win.

A week later, after getting no decisions on extra inning wins, karma helped him. HE came into a game in the 12th, threw 4 2/3 innings of shutout relief and got the win.

July also saw him threw a complete game victory against Cleveland followed up by a 7 inning scoreless start for another win over the Tigers.

By August 12, he was 5-0 with a solid 2.71 ERA. The deep A’s had stumbled across an innings eating stud who could do it all. He followed up a September 15 complete game win with a September 23rd save.

As the A’s swept my Red Sox in the ALCS, Burns didn’t get into a game. LaRussa opted to start Dave Stewart twice, Storm Davis once and Bob Welch once. Hard to argue with the results.

His fate was similar in the stunning World Series against the Dodgers. If any game looked like a possibility for him to get in, it would have been game 2. Storm Davis was hit hard and lifted in the 4th. But Gene Nelson, Curt Young, Eric Plunk and Rick Honeycutt got the call, not Burns.

As the A’s were losing Game 5, Hershiser was dominating and it was clear one of the biggest upsets in baseball history was about to be complete, Eric Plunk was pitching in the top of the 9th and Oakland was down 5-2.

With 2 outs and nobody on and light hitting Alfredo Griffin coming to the plate, LaRussa went to the pen. Todd Burns came in to face Griffin.

It was clear that it would be the only chance for Burns to pitch in the 1988 World Series and who knows? Maybe would be his lone chance in his career. He had been a valuable pitcher for the second half of the year and now he got to at least be in a box score.

I remember watching that game and putting a check mark next to Burns. I hated that A’s team. They beat my Red Sox. But I was thrilled for Burns.

Griffin grounded out and the A’s went quietly in the 9th and the Dodgers were champs.

As announcers Vin Scully and Joe Garagiola were signing off, they were making their final thoughts.

The combination of Scully and Garagiola was in retrospect a great one. But at the time I found Scully to be grating. Mainly because his voice reminded me of the 1986 World Series.

Garagiola was leaving NBC. (Was he being pushed out? Remember this was the same time they were trying to get rid of Johnny Carson. Out with the old in with the new.)

As he said good bye, he made time in his final sentence to make an observation. It wasn’t about Kirk Gibson’s homer in Game 1 still fresh in everyone’s mind. It wasn’t about the masterful performance by Hershiser.

He brought up LaRussa’s “touch of class” for bringing Todd Burns into the game in the 9th.

Joe got it. He always did.

Well LaRussa’s fears of Burns not getting into another World Series game were unfounded. He pitched in the 1989 and 1990 World Series with the A’s, earning a ring in the Earthquake Series.

With the addition of Mike Moore in 1989, Burns was no longer needed in the rotation so be became an effective long reliever and picked up 8 saves when Eckersley was hurt for a stretch in 1989.

In the end, Burns made 5 World Series appearance. Oddly never once appeared in the ALCS. But appearing in the World Series is cooler. 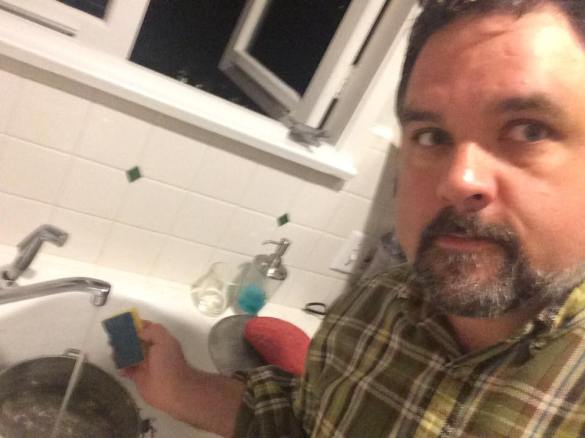 The Super Bowl was so boring and such a blow out that I decided to do the dishes and record a podcast while my sons made their lunch.

With such a lackluster post season, I realized that baseball’s worst post season in MY lifetime was 1989.

And with the Falcon’s title, the Braves were taken off the hook and can rebuild at their own pleasure.

Little did I know that while I was recording that, the Patriots were staging a comeback for the ages.

Guess I should know better than to count my chickens before they hatch. Everything I said in the podcast became obsolete. But I am going to share it anyway!

I try to guess sports and fail in the process on this episode of The Sully Baseball Daily Podcast.

END_OF_DOCUMENT_TOKEN_TO_BE_REPLACED 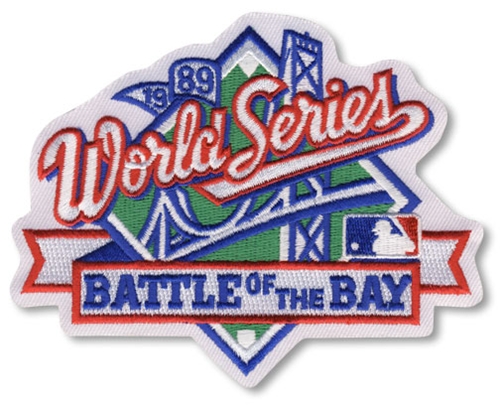