Today on The Sully Baseball Daily Podcast, I talk about the greatest moment of every baseball year: The moment a team wins it all and stands alone as the kings of baseball.

My fascination with the ending of the baseball year and how it is celebrated is something I can discuss for hours. Today I do so for a little more than 20 minutes.

And yes, I talk about that picture above of Charlie Hayes and Derek Jeter making the final out of the 1996 World Series.

A team that gave their fans generations of frustrations and a heart stopping playoff stormed into the World Series, out slugged the favored opposition one day, out pitched them the next and beat the other team’s marquee ace (who was gone after 5.)

Now they knew they had their two aces available fully rested for Games 5 and 6. Just split the next two and they’d be in the drivers seat for the World Championship.

The title was all but assured… a great moment for fans who already felt they had waited enough after years of near misses.

Am I talking about the 2010 World Series and Giants fans?

Or am I talking about the 1986 World Series and my beloved Red Sox?

That’s what happened when the Red Sox took the first two games from the Mets (including battering Doc Gooden) and went back to Fenway with the Mets reeling.

And we all know what happened after that.

I’ve seen many series in my life, both best of 5 and best of 7, that looked 100 done after 2 games. Where one team just looked over matched and dead from the neck up… only to win the damn thing.

I’ve seen my Red Sox win two Best of 5 series where they dropped the first two and didn’t have their best pitcher available for games 3 and 4. In 1999 when they lost the first 2 to Cleveland and in 2003 when they dropped the first 2 to the A’s, the Sox looked like a defeated crew.
And things turned around (and the Indians and A’s started making mistakes) and before you can say Trot Nixon homer, the Red Sox won.
The 1982 Brewers were battered and injured against an Angel team that boasted 4 former MVPs in their lineup and somehow pulled it off.
The 1985 Royals looked overmatched by both the Blue Jays and Cardinals… yet with some help from Don Denkinger won the whole thing.
The 1988 Dodgers looked overmatched by the Mets even though they split the first 2 games. The bullpen blew 2 Hershiser starts and the NLCS looked like a formality. Yet they won.
Remember how the Yankees just looked so overwhelmed by Atlanta at HOME in 1996? And when they took a 6-0 lead in Game 4, I remember thinking “Man, this Yankee team is just embarrassing themselves.”
Remember how it ended… the Yankees won in 6.
A lot can happen in 2 games. Sanchez and Bumgarner could fall on their faces.
The Rangers bats can wake up.
People didn’t think the Giants had 20 runs in them for the whole series… can they keep this offense up?
I think the Giants are in great shape. They need 2 more wins and will get 1 more Lincecum start and 1 more Cain start.
But things can turn fast.
Just ask the 1986 Boston Red Sox. 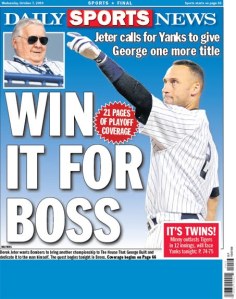 Win one for Steinbrenner!
That’s the rallying cry?
That’s the Yankee’s answer to winning a game for Brian Piccolo?
In the past the Yankees were inspired by Frank Torre’s heart transplant (1996), Darryl Strawberry’s cancer (1998), Paul O’Neill and Luis Sojo’s dad (1999) and of course all of New York in the wake of September 11 (2001.)
Now it comes down to “Hey, the checks this guy has written have cleared so far… maybe we should win.”
I’m not saying it isn’t good motivation… just don’t expect the rest of us to get choked up that George FINALLY won his 7th title.