Comparing my off season behavior with Jesse from Breaking Bad?

Equating Red Sox fans with the StarChild from 2001?

All in a day’s Sully Baseball Daily Podcast! 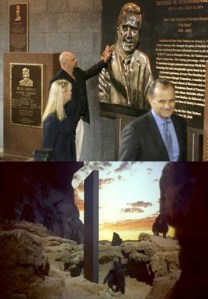 When I saw the Gigantic block that suddenly appeared at Yankee Stadium and saw all the people walking up to touch it, I immediately thought of the Dawn of Man in 2001.

Come on! I can’t be the only one who thought of that!

Were we expecting something SUBTLE?
Don’t complain folks. Steinbrenner wasn’t a subtle guy. He’s a guy who saw Yankee Stadium and said “I can do better”… TWICE!

Before anyone writes in saying I am not being respectful, remember I am a Red Sox fan who practically wrote a love letter to Steinbrenner after he died.

But look at that picture of David Wells and tell me he isn’t going to throw a bone in the air and have it turn into a spaceship!