A year after they got swept from the Division Series and just a few years since a World Series title (with many World Champs still on the Roster), The Red Sox had an up and down season filled with some dramatic wins, frustrating losses, domination of the National League and man handling by the Yankees.

The main culprit were injuries that decimated the pitching staff and starting line up.
At the trade deadline, the Sox did nothing of note and held onto young players despite obvious needs.

Ultimately the Sox finished with a winning season but in third place.

It’s starting to feel like 2006… but unlike 2006 I am not screaming bloody murder that the Red Sox didn’t go for it.

In 2006 I was screaming for the Sox to make a deal. GET SOMEONE! Who cares about young players like Dustin Pedroia? Clay Buchholz? Jacoby Ellsbury? Need to win NOW!!!

They held on to players… let the Yankees and Blue Jays finish ahead of them… got healthy… made a few nice moves and it is safe to say 2007 worked out well for the Red Sox.

So with all the names bandied about, I was most excited to see Ryan Kalish in the bigs.

Another home grown player… and maybe one who could catch on.

I kinda miss Bronson Arroyo… especially when he won again for the Reds.
Keep in mind Wily Mo Pena, the right handed slugger for the future that the Sox got in that deal, is now with the Independent Bridgeport Blue Fish.
Man that trade ALWAYS sucked.
I said it then and I’m saying it now. 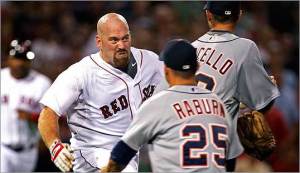 I called my dad last night during the Giants – Dodgers game last night and my dad couldn’t resist giving my Red Sox a little dig.

“You root for thugs! Hooligans! The Giants are role models!”
He might be right. But I can tell you one thing… this is NOT a repeat of 2006.
The Red Sox got smacked around in a 5 game sweep by the Yankees in ’06 and suddenly the team went limp. Either everyone got hurt or they quit.
This team got swept by the Yankees and are coming out swinging, in EVERY way!
The team is showing some fire, some guts and can even survive and ejection or two.
Youk gets tossed?
Fine, Lowell will come off the bench and hit a pair of bombs.
Seeing Lowell and Bay hit homers was more than heartening.
And the kid Junichi Tazawa let up 3 runs but guess what? It wasn’t a do or die inning like the bottom of the 15th in New York!
Just keep winning games, Red Sox.
The Magic Number to make the playoffs is 50.