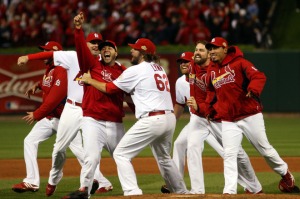 Let’s take four big league franchises and look at what they’ve done in the past 10 seasons.

Franchise 1 clearly has been the most dominant team of the past 10 seasons.
Franchise 2 had a great stretch but hasn’t been in the World Series nor LCS as much as Franchise 1.
Franchises 3, and 4 each won a title and a few pennants but were hardly dominant.

Which franchise do you think is which?

Franchise 4 is the Giants.
Franchise 3 is the Yankees.
Franchise 2 is the Red Sox.
Franchise 1 is the newly crowned World Champion Cardinals.

Next time in this off season you hear someone crow about how the Yankees win it every year and how they and the Red Sox just buy pennants, remember than in the past 10 years the team that dominated was actually in St. Louis.

The three other teams I mentioned had a monumental face plant in that span of time. The Giants blew the 5-0 lead in a potential World Series clincher in 2002. The Yankees had the 2004 ALCS. The Red Sox had the 2003 ALCS and the great collapse of 2011.

What was the faceplant for the Cardinals?
Where was their classic choke job?
Who was their Aaron Boone? Dave Roberts? Scott Spiezio?

The Cardinals have had the Jim Edmonds homer, Pujols against Lidge (yeah Houston won that Series… nobody remembers Game 6.)… Wainwright striking out Beltran… Carpenter shutting down the Phillies… and Game 6 of the 2011 World Series.

Remember that… the big bad Cardinals have won it again.

The Brewers and Diamondbacks played a thrilling 5 game Division Series.

The Brewers payroll was lower than what the Yankees paid for A-Rod, Sabathia, Teixeira and A. J. Burnett in 2011.

The Diamondbacks payroll was lower than what the Red Sox paid for Lackey, Crawford, Drew and Dice K for 2011.

Keep that in mind when discussing payroll in baseball. 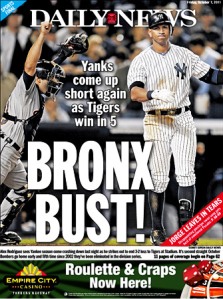 Yeah the Yankees did a faceplant and couldn’t take advantage of having Verlander rained out to only one start. They stranded a 25 man roster on base last night and A-Rod is back to being a goat.

Trust me, I understand. I LOVE the sight of the Yankees staring from the dugout with the collective “How did it get to here?” 1,000 yard stare.

It’s great.
I’m reading all the articles breaking down the Yankee’s disappointing ending which are all basically the same article that has been written EVERY fall since 2001 with the exception of 2009.

But I’m not gloating.

The Red Sox did an epic collapse and couldn’t make the playoffs.
The Yankees collapse wasn’t epic. It was more of a whimper.

So yeah, it takes a little of the sting out knowing that there won’t be ANOTHER parade in New York.

But that’s not reason to gloat.
Just grin and revel in a little Schadenfreude.