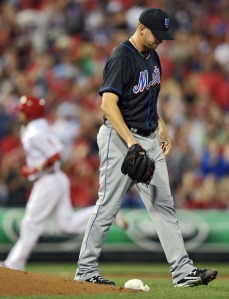 At the beginning of the season, I picked the Mets to lose 90 games… and man oh man Met fans HATED me for saying that.
I was called stupid, a Boston fan (which I can’t deny) and my sexuality was questioned. And I still felt that the team that lost 83 games last year was worse.
Throughout the year, I would e mails from Met fans and some of my friends who are Met fans asking me if I will eat my words about the Mets and if I would admit that I was wrong.
The Mets were playing better and some fans were upset that Beltran was dealt because the Wild Card was in reach.
Calm down everyone.
90 losses remains a real possibility.
For all the talk about the Mets playing better than expected this year, let’s keep a few things in mind.
They are a sub .500 team in late August. A $118 million payroll should be a contender. Being above .500 is a given.
They are on pace to lose 85 games this year, making this year a step backwards.
After tonight’s loss to the Phillies they are 8 games under .500 with 34 left to play.
Just to reach break even they would have to go 21-14 the rest of the way… a .600 clip.
And with Beltran gone and Reyes injured, the team has no spark.
The Mets have lost 15 of their last 20 games. This is their third 5 game losing streak since July 30th and their next four games are against the Phillies and Braves.

In order to lose 90 games, the Mets would have to go 12-22 the rest of the way.
So nope. I am standing by my pick. Besides, part of my rationale was that they would unload some players at the deadline and the weakened team would play some legit contenders. And that’s kinda sorta exactly what happened.
They were last above .500 on August 1.
They are 5-14 since.