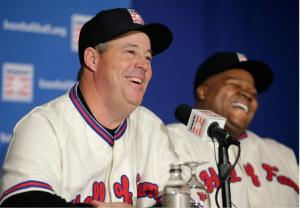 There is Hall of Fame cap controversy and the staff here at Sully Baseball has a solution.

Greg Maddux and Tony LaRussa have chosen to have their Hall of Fame plaques have no logo on their caps. LaRussa wanted to respect the A’s and the Cardinals, both organizations that he led to the World Series title. Maddux took pity on Cub fans. (He should have a Braves cap on.)

In the past there were other controversies and debates. Did Dave Winfield get paid to have a Padres cap on his plaque? Wade Boggs wanted a Devil Rays cap on his instead of the Red Sox but it wasn’t allowed. Same with Gary Carter who wanted to go in as a Met and Andre Dawson wanted a Cubs hat. The Hall of Fame put them in with Expos hats.

There is a simple solution to all of this that would eliminate all controversy and maybe create some new cool memories for the future:

Whichever team is the last one you play for in the major leagues is the one on your plaque.

Simple. No more handwringing. You retire with a team or you play your last game somewhere and are elected to the Hall of Fame, then BOOM. You are immortalized with that hat.

Kind of like musical chairs but with caps and museums.

Now that might lead to a few strange plaques, I admit.

Greg Maddux would be immortalized with a Los Angeles Dodgers cap.

And going back in history, there would be odd ones. 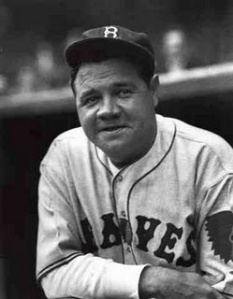 Babe Ruth? Forget the Curse over the Red Sox or the house he built for the Yankees. His plaque would have him with a Boston Braves cap. 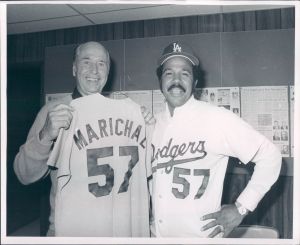 Juan Marichal was a beloved Giant who attacked the Dodgers with a bat once. But look at what cap would be on his plaque. AWKWARD! 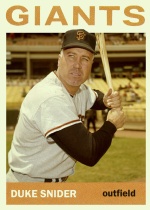 Well if the Dodgers can claim Marichal for the Hall, then it only seems right that a classic Dodger like Duke Snider goes in as a Giant. 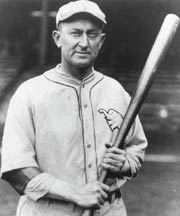 Ty Cobb would be a Philadelphia Athletic. 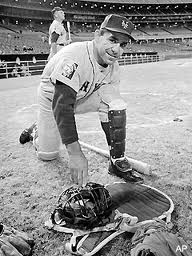 Yogi Berra would be a MET!

Dave Winfield would be a Cleveland Indian. 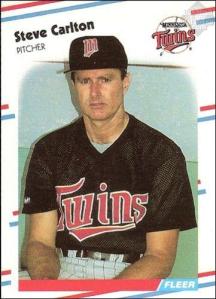 The Dodgers got Rickey Henderson along with Greg Maddux and Juan Marichal? That’s just not fair!

But wait a minute, Tom Glavine would go in as an Atlanta Brave. Remember he returned to the Braves after a sojourn with the Mets?

That could be a new baseball tradition. Getting a Hall of Fame caliber player to return for one game. The Cap Clincher! There is a precedent for that.

Phil Niekro pitched for the Braves for 20 seasons, beginning in Milwaukee in 1964 until the end of the 1983 season in Atlanta.

After some good years with the Yankees and Braves, he wore down and his career was over after a failed comeback with the Blue Jays.

But the Braves signed him for one game at the end of the 1987 season. He did not fare too well in that game against the Giants on September 27th. When he was relieved in the fourth inning, he got a standing ovation. Knucksie was leaving the game as a Brave. His fans saluted him one last time.

His plaque rightfully has the Braves logo on it. 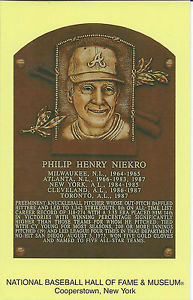 Imagine more games like that. Instead of a ceremonial “signing in spring training to retire with a team” the way that Nomar did with the Red Sox or Hideki Matsui did with the Yankees, you do it for real.

Ken Griffey Jr. returned to the Mariners instead of going out as a White Sox hitter. His plaque will and should have the “S” on it.

Let’s see more of that! More legends coming back and having the crowd go nuts, knowing that their favorite player will go out with THEIR cap. It can be a pinch hitting appearance or a 1/3 of an inning as a mop up man.

But it would be a new point of pride for a fanbase, an organization and a player.

And it would end any more hat silliness. You go out with a team and that hat is on the plaque.

Makes perfect sense to me. 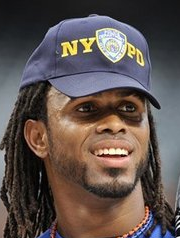 Here’s how long Mets owner Fred Wilpon conversation should have been with Bud Selig regarding September 11th first responder hats on the 10th anniversary.

SELIG: During the game?

SELIG: Well all the teams are wearing special September 11th hats that day already. We don’t like having teams wearing unofficial uniforms during a game.

WILPON: I understand, but we are a New York team and there will no doubt be fire fighters, police officers, rescue workers who were at the Towers that day at CitiField. And also relatives and friends of those who didn’t make it. And we’d like to show a sign of solidarity on this 10th anniversary.

SELIG: What if we had every team change their hats on a whim?

WILPON: What other city had a September 11th? If the Nationals wanted to do something, they should. That’s up to them. But September 11th was unique and this is the 10th anniversary and we are the only team playing in New York. I think an exception can be made.

SELIG: You aren’t going to sell the hats or try any September 11th merchandise, are you?

WILPON: No. Certainly not.

SELIG: And it is JUST for September 11th, not the whole weekend?

SELIG: Well, I can’t see how that’s a problem. It’s a nice gesture. Go ahead.

All the bases covered.
That conversation would last, what? A minute? 90 seconds?

The fact that it WASN’T that simple and it has turned into a “He Said… She Said” spat involving rules that may or may not have been enforced, fines the Mets were worried they had to pay and Bud Selig was mad that it became public shows how incompetent the two parties.

Those parties of course being the Mets organization, who took every baseball advantage in the world and ran the team into the ground… and Bud Selig who every day finds new reasons to want to throw him out of office. How could Selig not see this was the right thing to do?

And of course Joe Torre was thrown into the middle of this, trying to destroy whatever good will is left for him in New York.

A simple thoughtful act of wearing a hat to honor the memories of brave men and women instead became a nice barometer of people who have lost perspective.

And frankly it is kind of fascinating. 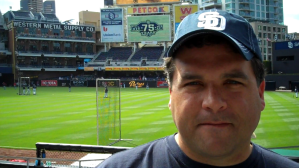 I was in San Diego today, making the latest Sully Baseball video with my wife. It was Padres hat day and I got to fulfill one of my life long dreams of having a San Diego hat.

I wear it in one of the videos we shot.
Like all adjustable hats, it is too small for my melon.

As always San Diego, one of our favorite cities, was great, hospitable and the ballpark was tragically empty.

But it helped make for some cool shots.

New videos will be out this week.

Watch the previous videos on my ShortForm TV channel.