How crappy are things for the Mets?
The Mets and their fans are looking at a $162 million settlement as a POSITIVE development.

Hey! It wasn’t a billion dollars that the Wilpons et al have to pay regarding the Madoff scandal!
It isn’t $393 million.

It’s just one million dollars for every single game played this year.
I don’t care if they don’t have to pay anything for a few years or what further settlements can be reached in those four years to lower their payments. Or if the Wilpons themselves will get any money back that they were swindled from.

There still is no hope in Metsville.
Why?
Because the turkeys who put them in this position ARE STILL THERE!

Remember how people were upset how some of the same people who tanked the economy were put in charge in trying to fix it?

How is that different than the Mets?
The same people who took every single outrageous example and ran the team into the ground are still here.

Why would anyone have anything resembling trust or faith that the Wilpons will do the right thing going forward?

The Wilpons have been involved with the Mets since 1980 but Fred has been the chairman of the board since 2003 and been in charge since then.

The Brewers have made more playoff appearances than the Mets since then.
They’ve gone through managers, general managers, made horrific signings, lousy trades, had two monumental faceplants, one disgraceful managerial firing and have destroyed all the good will among a fanbase despite a new stadium and TV Network.

They have taken every advantage of playing in New York and made it a disadvantage.
On the other side of town the Yankees are spending more than a million dollars a game on players. Yeah it is decadent and has led the Yankees to only one trip to the World Series in the past 8 seasons, but there is no wondering what the priority of the team is there.

Exactly what is it going to take to have Selig intervene and force the Mets to sell?
Say what you want about the Dodgers fiasco. At least they have a winning product on the field and will have a new owner before long.

I have no doubt that in the next 2 or 3 seasons, the Dodgers will win the National League West and be a pennant contender.

Can ANYONE say that about the Mets? Can anyone look at the Mets in this Division with this much young talent and say they are better than a 4th place team?

And what exactly about the Mets under the Wilpons recently make you think things will turn around?

They are slashing payroll, which might actually be a smart thing to do. I mean why RAISE the payroll when you have no chance.

But someone else needs to drive the car.
Just remember, Met fans. The Wilpons will shell out a million dollars a game to make up for their screw up.

Would YOU still have your job if you did that?
Would your boss still have theirs? 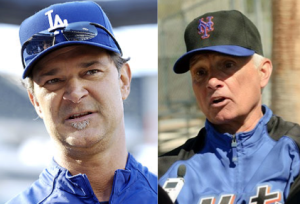 It’s obvious that Kirk Gibson is going to win the National League manager of the year. Nobody, and I mean NOBODY was picking the Diamondbacks to win the NL West this year, let alone take an 8 1/2 game lead in early September.

So Gibson will add a Manager of the Year trophy next to his MVP (which will no doubt be the subject of another blog post.)

But take a look at what Don Mattingly and Terry Collins have done. Both are playing for big budgeted fiascos. The Dodgers have had as ugly a season as I can remember with all of the behind the scenes nonsense. The McCourt divorce. The handling of the Brian Stowe beating. The MLB take over. The Bankruptcy. The money being taken out of the team for personal reasons. The fans staying away in droves.

There was every reason in the world for the Dodgers to pack up and not show up. And for a while that is exactly what they were doing.

The Mets were also a mess. I thought they were a 90 loss team waiting to happen. The post Madoff Amazin’ Mess was a mismatch of broken down veterans, expensive players who wanted out, young players who weren’t ready and a parade of players on the disabled list.

And playing in the same Divison as the Phillies and Braves meant the season was irrelevant in April. And come trading deadline, they were sellers.

90 losses may have been a generous prediction.

It would not take a Herculean effort for both teams to finish with a winning record.

The Dodgers are aided by the fact that Clayton Kershaw should win the NL Cy Young and there is a case for Matt Kemp to win the MVP.

The Mets don’t have that star power, but they are finding unlikely heroes and staying focused in a way that I didn’t think they had in them.

So give Don Mattingly and Terry Collins a lot of credit.
Both the Dodgers and Mets are ugly places off of the field and if the on field product reflected that, nobody would have blinked.

But if they could weather the storm of the craziness of 2011 and say “Hey! At least we put a winning product on the field” then THAT is worthy of Manager of the Year consideration.