Today is part 2 of my conversation with former Rangers and Cubs infielder Bump Wills.

We talked about Bert Blyleven, showing up Mario Soto and the awkwardness of getting your picture taken for a baseball card (including the pic above from Fleer.)

That and more on this  episode of The Sully Baseball Daily Podcast.

END_OF_DOCUMENT_TOKEN_TO_BE_REPLACED

I’ve been a Red Sox fan has long as I could remember.

I remained loyal even when I lived in the San Francisco Bay Area, New York and Los Angeles.
My Red Sox fan credentials are solid. Don’t believe me? Turn on HBO.

But I wonder what my fandom would have been if I didn’t grow up in New England.
What team would I have picked if geography didn’t play such a factor?

Simple. I would have been a Pittsburgh Pirates fan.
And anyone who reads this blog regularly would see why.

My theory that you truly start following a team when you are 7 or 8 years old have the Pirates playing a huge part of my baseball life.

The 1979 World Series was the first one I remember watching, and I can remember it like it was yesterday. The Orioles were terrific but the Pirates were just cool. Their players seemed to be more fun, their uniforms were bonkers and the players were dancing to disco in the dugout.

I’ve written a lot about the 1979 Pirates, including this post which is my personal favorite one.

Willie Stargell remains one of my favorite players ever. I banged the drum loudly for Bert Blyleven’s Hall of Fame candidacy and for Dave Parker as well. And to this day, I get goose bumps when I hear Sister Sledge’s We Are Family and can close my eyes and see Pops take McGregor deep.

Years later, I got emotionally attached to another Pirates team. I rooted for the 1990 and 1991 Pittsburgh Pirates to win their Division and in the NLCS. They lost a pair of heart breakers.

I was first and foremost a Red Sox fan in 1992, but that edition was a truly boring team.

Boggs and Burks were finishing out their time with the Sox. Veterans like Greenwell and Jack Clark were hurt and Tom Brunansky led the team with 15 homers. Clemens was still great but the team was a non contender. (Back then the Red Sox and Yankees were boring, losing non contenders. Go figure.)

I found myself following the Pirates, who were supposed to finish behind the Mets after Bobby Bonilla defected to Queens (along with new comer Bret Saberhagen.)

Instead the Pirates got off to a 12-2 start. The fought with the Cardinals, Mets and Expos until mid season they blew the competition away. An 11 game winning streak in late July and early August made a joke of the race. And there was a sense of urgency with the team.

They knew that Barry Bonds and Doug Drabek were going to be free agents and this would be their best shot to win a pennant. And if you saw me during the 1992 NLCS, you would have thought I was born and raised in Pittsburgh. And after the Francisco Cabrera hit stabbed Pittsburgh in the throat, I was crushed more than any baseball event since 1986.

On the blog, I’ve constantly got on the Pirates for their awful drafts, their lousy trades and I was so excited for them last summer when for a few months they looked like contenders.

But I also find myself being drawn to the Pirates of the past.

I have an obsession with 1925 World Series hero Red Oldham.

I wrote about the alternate history of a potentially integrated Pirates team in 1938.

I watched the MLB Network rebroadcast of Game 7 of the 1960 World Series.

I am currently reading a book about the 1971 Pirates and have a Roberto Clemente book next on my shelf.

I have a Pirates fascination.
It is easier to root and follow a team now with MLB.com, XMRadio, etc. If I had all of that back in 1979, maybe I wouldn’t be a Sox fan. Maybe I would have been a die hard Pirates fan.

Maybe it is best.

But let the record show, I am rooting for the Pirates. The NL Central is winnable. The 7 year old version of me is cheering you on.

And one final Pirates obsession… I LOVE this video about Dock Ellis and his no hitter.
Enjoy.

I hope you enjoyed the Hall of Fame ceremony yesterday. Pat Gillick, Roberto Alomar and Bert Blyleven all deserved to be voted in. I have supported Tim Raines, Jack Morris, Barry Larkin and Dave Parker in the past.

With the Cobra off of the ballot, there is good news for Raines, Morris and Larkin:
Next year’s first time Hall of Fame ballot stinks.

I’m not kidding.
My dad and I went down the list of all the players who will be on the ballot for the very first time.

Heads and shoulders above all the other first time candidates is Bernie Williams.

Look, Bernie was a terrific player and a Red Sox killer. He was a champion who wore the pinstripes with honor and had clutch post season moments in the 1990s and the 2000s.

Nobody is denying that his #51 deserves to be retired at Yankee Stadium and he should get standing ovations in the Bronx for the rest of his life.

The only reason he should be at the Hall of Fame induction is if he is hired to be the musical act.

And he’s BY FAR the best new candidate.

Wow.
Not a valid argument for one of them. Other than Bernie Williams, what player deserves 5% of the vote to keep them on the ballot a second year?

Williams is the only person on that list that I think has a prayer of being on the ballot in 2013, and that will probably be because a lot of sports writers think he is a nice guy.

So with writers feeling like they should put SOMEONE on their ballots, Larkin, Morris, Raines and maybe even Lee Smith will get some more love than usual. Maybe 1 or 2 of them will be pushed over the top.

And I hope they do because next year will be the last normal voting year before the dreaded 2013 ballot.

Sure there were juicers on last year’s ballot and Mark McGwire, Juan Gonzalez and Rafael Palmeiro will return for more (or less) votes next January. (So will Jeff Bagwell, a slender hitter with limited power who packed on muscle fast, hung out with Ken Caminiti and became a Hall of Famer. Not saying anything except facts.)

(Throw in Sammy Sosa too for good measure.)

2013 will be the LEAST FUN Hall of Fame vote in history. The feats of Bonds and Clemens will be staring at us all in the face… and nobody will know what to do. 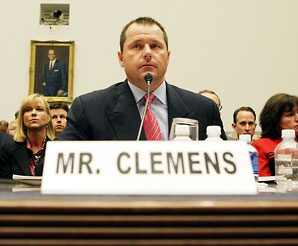 It’s great news for Craig Biggio, whose 3,000 hits will get him in automatically (just ask Rafael Palmeiro and Pete Rose.)

And it will probably be great news for Mike Piazza (although there have been louder whispers about Piazza’s physique than for Bagwell.)

Voters won’t know what the hell to do. So the borderline cases might ALL get in as a way to procrastinate or put off the inevitable.

All I know is this:

The next few years of Hall of Fame voting will be so NOT fun that you will become nostalgic for debating over Robbie Alomar spitting in an umpire’s face.