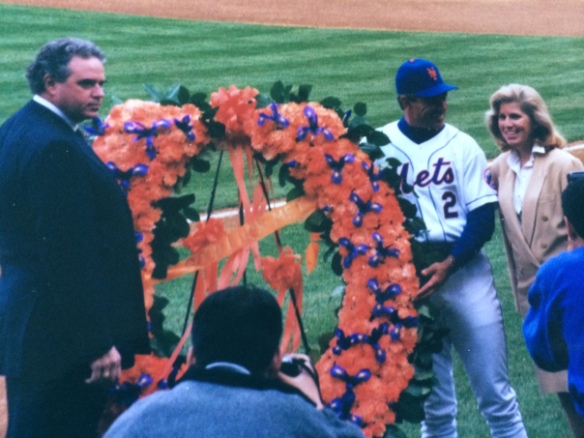 Before a game in 1997, a giant flower ring was presented at Shea. Bobby Valentine was either given it or presented it.

I would make fun of it, but I do not know what the ceremony was for and I do not want to look disrespectful.

Oh and by the way, those Mets uniform without pinstripes were the best home unis they ever had.

I am going to say something that might surprise you when you consider that I am a Red Sox fan.

I LOVE Bobby Valentine. No, I am not being sarcastic. I really do. I think he is great. I have warm feelings about him.

I am not even mad about his one disastrous season as manager of the Red Sox. That horrible season, 2012, set up the magic of seeing my Red Sox win it all in 2013. There was no prolonged agony of the Bobby Valentine year.

The great Boston collapse of 2011 and the insanity and futility of the 2012 Bobby V Sox were the prologue for the Red Sox stunning triumph the next year.

Titles heal all wounds. Yeah, he managed the single worst season in Red Sox history since the 1967 pennant and the beginning of Red Sox Nation. That made 2013 sweeter and made John Farrell look like the second coming of Earl Weaver by comparison.

So thank you Bobby V.

It is a shame that so much of Bobby V’s reputation is tied to that one horrible year. Truth be told, he lived a wonderful baseball life and has a job that he SHOULD be doing right now.

Bobby V belongs on television. He used to be on ESPN. He was WONDERFUL on ESPN. He has a great look on TV, a unique sounding voice and a know it all smirk that can be funny and condescending all at once.

Bobby V could take the role that Howard Cosell once did so wonderfully on his many roles in ABC Sports. You might not agree with him, but he is usually right.

He would reach back from a fertile spring of knowledge. A former first round pick and college star, Valentine played in the Dodgers organization before moving to the Angels and Padres.

In 1977, he joined the Mets as part of the controversial Dave Kingman deal.

Eventually, his career wound down as a player only to become a solid manager in three very different places. He took over as manager of the Rangers in 1985 and by 1986, they had a contender on the field. They finished second to the Angels with an 87-75 record. The team had talented and colorful stars like Ruben Sierra, Oddible McDowell, Mitch Williams, Pete Incaviglia, Jose Guzman, Greg Harris and Bobby Witt.

The team looked like they could contend in a soft AL West but fell short in a disappointing 1987 season and then were frequently buried by the A’s.

But Valentine managed solid All Stars like Rafael Palmeiro and Julio Franco as well as the return of Nolan Ryan to the American League. The Rangers didn’t go to any Octobers under Bobby V, but they were fun to watch.

He managed the Chiba Lotte Marines to their best record in years in 1995 but clashed with management and was fired.

In 1996, he returned to America and while managing the Mets Triple A team, he was called up to take over the major league squad from Dallas Green.

The Mets were a disaster and just 3 year removed from arguably the least likable team in franchise history. Under Bobby V, however, the team won 88 games and contended in 1997. In 1998, the team was a Wild Card contender down the stretch again.

In 1999, the Mets won a one game playoff against the Reds to win the Wild Card, stunned Arizona with a walk off homer to clinch the Division Series and took the Braves 6 games in one of the wildest and most dramatic NLCS ever played.

In 2000, the Mets topped the Giants and the Cardinals to win the NL Pennant before losing the Subway Series to the Yankees in 5 hard fought games. Bobby V and Joe Torre were a pair of Italian American managers from the Northeast. One was a smart aleck, the other was a gentle grandfather figure. It was a fabulous compare and contrast.

While Torre had a stern but loving paternal quality to him, Valentine would get ejected and then put on a mustache as a disguise back in the dugout. The remains one of the funniest moments in baseball history.

Bobby V’s Mets were instrumental in the healing post 9/11 and Mike Piazza’s homer against the Braves still resonates in the city. He won the Branch Rickey Award for his charity work. But eventually he and GM Steve Phillips clashed too many times and he was let go in 2002, just 2 years after delivering the fourth pennant in Mets history.

He returned to the Chiba Lotte Marines and led them to the 2005 Japan Series championship, making him a hero for the locals and capping a wonderful managerial career. Bobby V clashed with management again, but when the Marines tried to smear him publicly, the fans were all on the manager’s side.

He returned to America and ESPN. He should never have left or even wanted another managerial job. He should have been like John Madden and let people think “If he got another gig, he’d be great.”

Instead he had the disastrous year in Boston. It would be like remembering Michael Caine only from Jaws The Revenge.

Bobby V had the baseball life to BE a know it all on TV. That should have been his American legacy. He would always be the smartest guy in the studio. 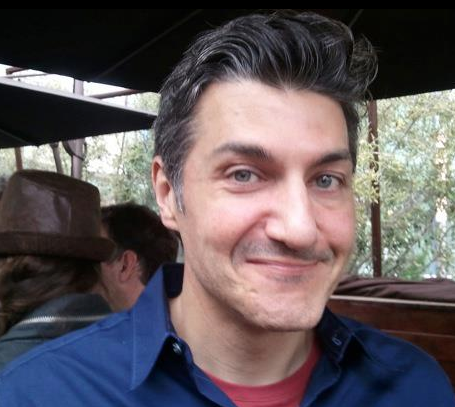 He was optimistic about the 2013 Red Sox.
I was totally pessimistic.

I could never be happier that I was so wrong.