It is time for the SUNDAY REQUEST

A thought provoking request, if for no other reason than it took me forever to figure out how to even make this evaluation!

It is a “Who is to blame here?” episode of The Sully Baseball Daily Podcast.

My first contribution to Bleacher Report is a compilation of the best moments in World Series history by the losing team.

Cookie Lavagetto breaking up a no hitter… Bob Gibson’s domination of the Tigers… Fisk’s homer… the post 9/11 World Series and the heroic Yankees… All amazing moments. And NONE were World Champs that year.

My wife thinks I’ve been obsessing over uniforms on the blog these days. And as usual, my bride is right.

I’ve criticized the Royals and Rays for their tops and the Indians for their hats while praising the new Pirates uniforms.

But now I am turning my uniform thoughts to a bigger fish. The Yankees.

Wait a second Sully, you might be saying. What can be said about the Yankees uniforms? They haven’t changed since the days of Babe Ruth!

Actually during Ruth’s playing days they didn’t have the interlocking N-Y on their uniform.

Any pictures you see with Babe Ruth wearing the N-Y on his jersey were taken at Old Timers Day after he had retired.

But since the days of Joe DiMaggio and Lou Gehrig, the uniforms, both home and away have remained constant. 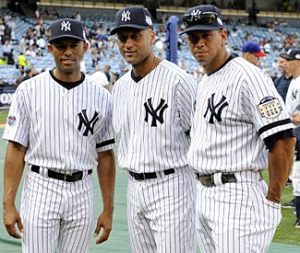 The hats are the same…

The home jerseys are the same…

The road unis are the same…

There’s no names on the back…

What is there to discuss?

This is Sully Baseball and there is ALWAYS something to pick apart, and for the Yankees it is the warm up jackets which have changed over the years.

And seeing that the managers are usually the ones who wear the warm up jackets, let’s take a look at them over the years as worn by some of the best Yankee managers of all time.

The manager of the first great Yankee dynasty had one of the dullest jackets in their teams history. It was probably an after thought. “Here’s a jacket… just sew an N and a Y on them.” They didn’t have the interlocking NY on it. Yeah I know it wasn’t on the uniform but it IS on the hat.

But give them a break. They didn’t know how much dough was to be made from merchandising. 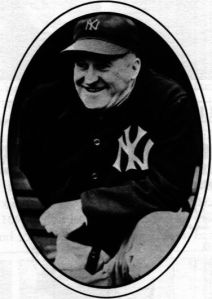 That’s a little better. When the Yankees became the first team to win 4 straight World Series, their manager was wearing a jacket that actually can be identified with the Yankees.

The N-Y matches the hat logo, but it is a little sloppy. It kind of resembles an elementary school art project where they have to cut out the N and the Y carefully… and inevitably isn’t even. But at least the effort is there.

The script Yankees never appeared on their uniforms and oddly looked too much like the Dodgers script for my liking.

Also, there is another problem I have with this jacket. They introduced red outlines to the letters and the collars. It is hard to tell from this picture, but it can be seen clearly here. Red does NOT belong on the Yankee uniform.

Now THIS is a jacket. The right N-Y logo on the chest and the top hat logo on the arm. Only white (no red) on the collar and the sleeves. Buttoned up (or not in the case of this picture with Billy Martin.)

The Yankees regained their glory in the late 1970s with Billy wearing this jacket, yelling “don’t you try and intimidate me!” at the umps in the World Series.

The best jacket of them all.

Buck had to pick up the pieces of the mess that was the Yankees of the early 1990s… and the players strike of 1994 probably cost him his best shot of being a World Series winner. But he brought pride back to the Bronx and looked good in the lighter zip up jacket.

There was less chance to be slightly unbuttoned like Billy in the 1970s, but that wasn’t Buck’s style. He ran a tight ship and wore a tight jacket in the process.

Joe Torre brought stability, class and oh yeah titles back to the Bronx. But he also brought back the era of the cursive logo jacket.

As I said with the Stengel entry, I’ve never been thrilled with the cursive Yankees (although this time they at least removed the red from it.)

But there is something cynical about how the jacket was introduced. They didn’t wear it at all until game 1 of the 1996 World Series. Did they have them sitting in a warehouse, ready to spring them out in front of the biggest audience? What if Baltimore won the pennant that year? Would they wait until spring training? The 1997 playoffs? I say put them back into moth balls.

Look, I get it. Merchandising is king and the Yankees need to sell lots of variations of clothes in order to pay for A-Rod, Jeter and Sabathia. And they don’t have tons of alternate uniforms, so they need to mix and match something else… so they have home and away warm up jackets.

But how LAZY is this jacket. How dull. Do you know what this looks like? When a beer commercial wants to recreate a baseball game but they don’t want to pay the licensing fee so they make up a boring fake generic bargain basement uniform. That’s this jacket. If they HAVE to have the cursive Yankee for the home jacket, then just do the interlocking N-Y on the away jacket.

So let’s get at it Yankees… even as a Red Sox fan I can admit your uniforms look awesome. It doesn’t take a big effort to have your jackets also look great.

Hmm… I wonder what uniform I can obsess about next…?