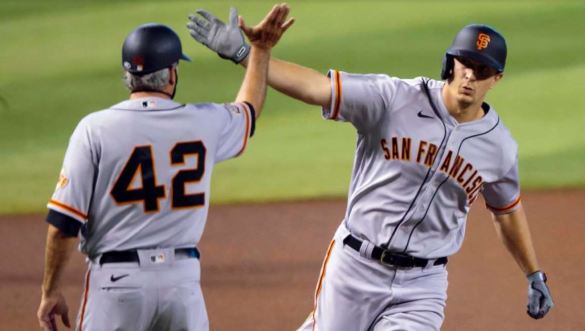 Alex Dickerson had a night for the ages, reaching base 6 times, homering 3 times, scoring 5 runs and driving in 6 as the Giants ran away with a 23-5 laugher against the Rockies.

Aaron Nola blanked the Nationals over 8 shutout innings, allowing 2 hits while striking out 9 as the Phillies won, 6-0.

Zach Plesac struck out 6 Royals in 6 innings, allowing a single run as the Indians rolled to a 10-1 victory.

Victor Reyes drove in 5 runs, including a homer while going 4 for 6 in the Tigers 12-1 pounding of Milwaukee.

Willy Adames collected 3 hits, including a homer, but the Rays fell short to the Yankees, 5-3.

Ke’Bryan Hayes got 2 extra base hits in his big league debut, including a game tying homer, but the Pirates fell in extra innings to the Cubs, 8-7.

Cody Reed came out of the bullpen to throw 2 key shutout innings to stop the Yankee attack. The Rays could not take advantage of it and lost, 5-3.