On Today’s episode of  The Sully Baseball Daily Podcast, I took a journey… from Cisco and San Jose (where the A’s SHOULD be playing) through Fremont (one of the potential homes of the A’s) right to the parking lot of the O.co Coliseum.

Along the way I talk about why it would have been better if the A’s had stayed in Philadelphia and the Phillies had moved and all the potential landing spots of this exciting if troubled franchise.

Yasel Puig, Kendrys Morales, John Lackey and for his second no hitter, Homer Bailey all owned baseball on July 2, 2013.

To see the up to date tally of “Who Owns Baseball?,” click HERE. Subscribe on iTunes HERE. 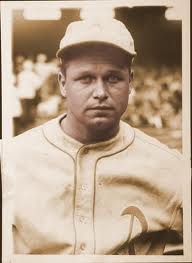 Baseball loves to honor their ghosts.

The legends of Yankees past hover over the Bronx, even after they crossed the street.
Ted Williams’ legend is honored inside and out of Fenway.
Roberto Clemente … Gil Hodges… Ty Cobb… all are honored in their old cities.

Even some players who never played in their team’s new homes are honored by their transplanted franchise.

Most players are the team’s legends. Others are hometown favorites. But most of the all time greats are saluted in one-way shape or another.

Which makes the fate of Connie Mack, Lefty Grove and Jimmie Foxx so much stranger.

Each of them was a legend and one of the dominating forces in the game during their time.

This was a man who managed the Athletics to pennants in four different decades. A brilliant hands off manager, he stressed intelligence and fundamentals. He was a wonderful contrast to the volatile John McGraw and the New York Giants, whom Mack’s Athletics played 3 times in the World Series and beat them twice.

He went from the teams of Rube Waddell and Eddie Plank in the 1900s… to the $100,000 infield of Eddie Collins, Home Run Baker, Jack Barry and Stuffy McInnis in the 1910s… and finally the greatest Philadelphia team of all in the late 1920s and early 1930s with Mickey Cochrane and Al Simmons… and of course Grove and Foxx.

He was the best pitcher of his era… a time of big bats and big home run totals. He arrived after the deadball era and once the previous generation of superstar pitchers (like Grover Cleveland Alexander and Walter Johnson) had ended their careers.

He even led the league in saves one year.

And while Grove didn’t know it, he had the best ERA+ five times and the best WHIP three times while in Philadelphia.

And he was the 1931 American League MVP. 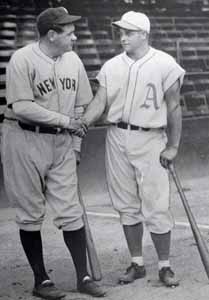 The Beast became the premiere power source in baseball once Babe Ruth’s career started to wind down. He would hit 58 homers in 1932, missing Ruth’s mark by just two. He was a Triple Crown winner, won back to back MVPs for Philadelphia and drove in 115 or more runs each of his full seasons.

Don’t like stats like that?
He had the highest OPS three times for the A’s. Two times had the best WAR. Three times had the best run created, Adjusted OPS, Offensive Win Percentage and Adjusted Batting Runs. I am still figuring out what all of that means… but I get the sense it is impressive.

Most importantly of all, both Grove and Foxx both led Mack’s Athletics to three straight pennants and the 1929 and 1930 World Series titles.

Mack was one of the great managers in the game’s history.
Grove is an All Time legendary pitcher and Foxx one of the most feared sluggers.

Not to disrespect anyone… but Harold Baines, Ron Guidry, Johnny Pesky and Randy Jones all have their numbers retired and they all are loved by their teams and fans. But none of them had the impact on their era the way that Mack, Grove and Foxx did.

But the A’s seem to only honor those who played for Oakland. And seeing they haven’t seen fit to honor Dave Stewart, an Oakland NATIVE who led the A’s to the promise land, the chances of them retiring the numbers of Philadelphia players are slim to none.

And the Phillies have their own history to honor. Besides, they are the team that DIDN’T leave Philadelphia!

Enough passing the buck. Someone should retire their numbers or erect a statue in their honor.

If the A’s ever get a new ballpark, have a concourse where the great Philadelphia Athletics are given their due and Mack, Grove and Foxx are honored.

Perhaps have it outside Citizens Bank Park in Philadelphia… some sort of memorial that is separate from the Phillies and yet still honoring the city’s past.

Remember Mack used to have the biggest honor you could have in Philadelphia.
They named their stadium after him.

But these days, he’d have to change his name to a bank or an orange juice company to have another park Christened in his honor.

If you read or listened to World Series coverage this year, you’d think this was the second time New York and Philadelphia squared off in the World Series.

And it is true, the Phillies and the Yankees only played each other one other time… the 1950 World Series.

But well before the Phillies became THE team in Philadelphia and the Yankees became the dominating force in baseball, Philadelphia and New York squared off three different times with great teams that were the class of the American and National Leagues.

When the World Series was formed in the beginning of the 20th century, John McGraw’s Giants were a powerhouse in the National League. And Connie Mack’s Athletics were quickly becoming the best team in the American League.

Now of course that would be a Bay Area rivalry, but back then the Giants were the best team in New York and the Athletics ruled Philadelphia baseball.

The Yankees were known as the Highlanders and were inconsistent in the standings.
The Phillies were mediocre non contenders.

Along with their larger than life manager, McGraw, the Giants featured Hall of Famers Christy Mathewson, Roger Bresnahan, Joe McGinnity and Rube Marquand.

A pretty impressive array of talent in the pre-Babe Ruth era.

In 1911, the Athletics finally got to Mathewson in a dramatic Game 3. Frank “Home Run” Baker earned his nickname with a game tying homer with one out in the 9th inning off of Matty. The Athletics would score the eventual winning run on an error in the 11th.

The Giants would have some late inning heroics of their own in Game 5. One out from elimination, Doc Crandall hit an RBI double and Josh Devore singled him home to tie the game. Fred Merkle would drive in the winning run in the 10th.

But the Athletics would win big in Game 6 behind Chief Bender, 13-2.

Two years later, it would again be New York versus Philadelphia. In Game 2, Mathewson faced another future Hall of Famer, Eddie Plank.

Mathewson threw a 10 inning complete game shutout, driving in the winning run himself in the 10th.

But the Athletics won every other game and took the series in 5. Hall of Famer Eddie Plank out pitched Mathewson in the Game 5 finale.

So taking those three series and the 1950 World Series, Philadelphia and New York are now tied 2 series apiece.

They are playing the rubber match.

Hey look at that! I found a little MORE drama for the Philadelphia/New York match up!