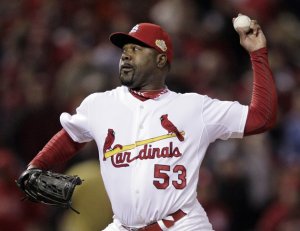 Arthur Rhodes was going to get a World Series ring no matter what.
He was a member of both the Rangers and the Cardinals this year. But no doubt it will be sweeter that he got his ring with the club he actually played for in the World Series.

20 seasons in the bigs… and this was his first trip to the World Series.

He was a respected veteran who put up a few tremendous seasons as a middle reliever.
I know it isn’t cool to talk about win totals, but he DID go 19-4 between 1996 and 1997, both playoff seasons for Baltimore.

He was an Oriole when Ripken passed Gehrig and Jeffrey Maier interfered with Jeter’s flyball.
He played along side A-Rod, Edgar Martinez, King Felix and Ichiro in Seattle.
Played with the three Moneyball aces in Oakland.
He relieved CC Sabathia and Cliff Lee in Cleveland.
He played with Howard, Utley, Rollis, Ruiz and Cole Hamels in Philadelphia.
He was teammates with Hanley Ramirez in Florida.
He was on the Reds team that finally made it back to post season in 2010.
And of course with BOTH pennant winners in 2011.

But something struck me about his career.

He made his big league debut as a member of the Baltimore Orioles on August 21, 1991 against Texas.

Some of the batters he faced that day included Julio Franco, Brian Downing and Gary Pettis.

On August 27, 1991 he pitched his first home game in Baltimore.
NOT in Camden Yards. He was pitching in Memorial Stadium. His career predates Camden Yards!

He faced a Yankee team filled with mismatched parts as they were floundering through the Stump Merrill years.

Poor Don Mattingly, stuck with such a rotten team.
(The lead off hitter was a young Bernie Williams, a preview of better days for the Yankees.)

But something struck me about the box score that day.

Dwight Evans played that game for the Orioles. He came in as a pinch hitter for Sam Horn (yeah, THAT Sam Horn).

Evans played his final season in Baltimore. Arthur Rhodes was his teammate.
A pitcher in the 2011 World Series was once on the same team as Dwight Evans. It seems like it was 4 or 5 generations ago that Evans played.

Arthur Rhodes pitched before the Yankees got to be good again, before there was a Camden Yards and played along side Dwight Evans.

Think of the young players from this Cardinals team.
24 year old Daniel Descalso can now be connected to Dwight Evans in one move.

Congrats on your World Series ring, Arthur.
You have truly earned it.