It is time for the Sunday Request.

@sullybaseball Do you think that Pablo will help eat up ground on the other AL East contenders? Nice off season working out, Kung Fu Whale.

Yup. Pablo Sandoval is fat. He was fat. He is fat. He may always be fat. And that is no way to win over fans.

That and some spring cleaning on this episode of The Sully Baseball Daily Podcast.

END_OF_DOCUMENT_TOKEN_TO_BE_REPLACED 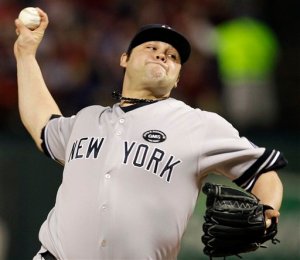 The word out of Tampa is that CC Sabathia has dropped weight and looks like he is in terrific shape. That’s good news for the Yankees because, when you consider how lousy Phil Hughes’ second half was, Sabathia is the only starting pitcher the Yankees have that they can count on.

But evidently there is a constant combined weight for Sabathia and Joba Chamberlain. Whatever weight CC lost, Joba packed on.

And, as shown in the picture above from last season, it isn’t like Joba resembled Tim Linecum’s waistline last year.

This is a make or break year for Joba. As I wrote before, I blame the Yankee management for the derailing of his career. But this is bonkers.

It’s not like this is Joba’s first year in New York. It’s not like he should be surprised that he will be under the microscope (provided they find a Petrie dish big enough for him.) The Yankees are thin in pitching… but not LITERALLY.

Perhaps Joba felt that with Bartolo Colon in camp, there would be no way he would be declared the fattest pitcher.

But the team needs a starting pitcher and relief depth… not a guy who looks like someone signed up for fantasy camp.

Besides, this is his 4th spring training in a row where his role will be in question.
He should know that the New York media loves to pick on a player’s weakness. And when your name is ALREADY Joba, maybe you should try to watch your weight a little better.