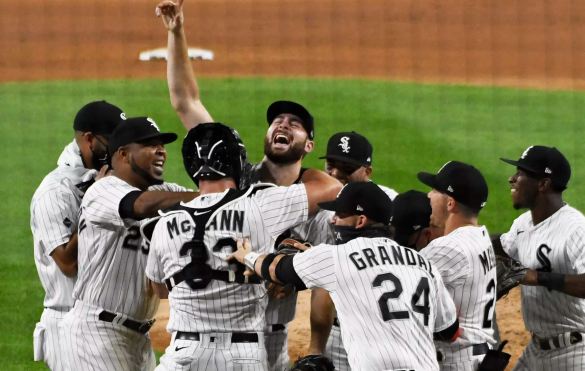 Brandon Belt amassed 11 bases, including a pair of homers, the second one tied the game in the 9th as San Francisco took a wild 10-8 extra inning marathon from the Dodgers.

Lucas Giolito threw the first no hitter of the season, striking out 13 Pirates with a 4-0 final for the White Sox.

Marcus Semien went 3 for 5 with a homer in the A’s 10-3 pounding of the Rangers.

Brandon Woodruff struck out 8 Reds in 6 innings, allowing 2 runs to earn the 3-2 decision for the Brewers.

Jaime Barria came into the game in the second and pitched 5 innings, allowing 1 hit and 1 run. But the Astros put up 5 in the first and the Angels were doubled up, 6-3.

Luis Castillo gave up 1 earned run over 6 innings, striking out 9 Brewers. But the Reds defense betrayed him as he took the hard luck 3-2 decision.

Renato Núñez homered and singled in the Orioles 4-2 loss to the Rays.

Justin Turner got 4 hits, scoring 3, but the Dodgers dropped the 10-8 extra inning game to the Giants.