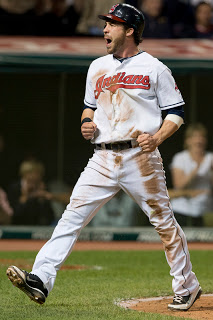 It is players like Jason Kipnis and Vinnie Pestano who are pulling it off. How many pre season prediction articles for the pennant race included Vinnie Pestano.

I can’t even get a handle on this team in terms of the heroes. Last year you had people like Carlos Santana and Travis Hafner and Shin Soo Choo getting dramatic hits. This year, they just kind of sort of win.

Nothing spectacular. Nothing that makes you perk up and say “Wow, are we seeing something special?” Just “Oh, the game is over and look at that! The Indians have more runs.”

I picked the Tigers to win the Central (as did most people in the Solar System) and I bet when the final 3/4 of the season is played out that Detroit will right the ship and this strange anonymous Cleveland team will fade back.

Or will they?
This reminds me a little bit about how I felt about last year’s National League West race. I kept thinking “Well this Diamondback team is clearly not going to keep this up. Eventually the Giants will pull away.”

And it never happened.

I can’t figure out this Indians team.
The Tigers had better solve them before they wonder what the hell happened in 2012. 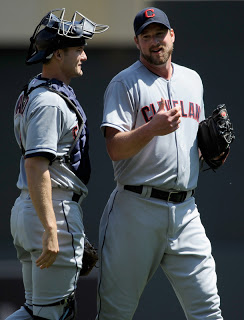 The Cleveland Indians season is little less than a quarter over. And as I type this post, they are in first place with a record of 20-16. They are scored 4 first inning runs against Felix Hernandez, so barring a lousy outing by Ubaldo Jimenez, they will go 21-16. Currently only the Orioles, Rays and Rangers have a better record than Cleveland in the American League.

What are we supposed to make of this?

At this point last year, the Indians were building up a lead the swelled to 7 games in late May. They were in first place by themselves after the All Star break.

So there is a lot of time for the Indians to stub their toe and wet the bed.
And all of the empty seats at the Jake (sorry I still call it the Jake) show that Cleveland fans just aren’t biting.

They are a strange team to figure out. Their stats don’t blow anyone out of the water and when Derek Lowe is their biggest star, that’s a problem.

But Shin Soo Choo and Asdrubal Cabrera are starting to hit and whoever Jason Kipnis is, he seems to always be involved in a win.

There are 125 games to go.
There is a lot of room for this team to be awful.

But the first quarter doesn’t look so bad.

I don’t want Cleveland fans to get too excited.
But get a LITTLE excited. Maybe this won’t be THE year… but did anyone expect Arizona to do squat last year?

I can’t figure this team out.
But for now, they are fun.