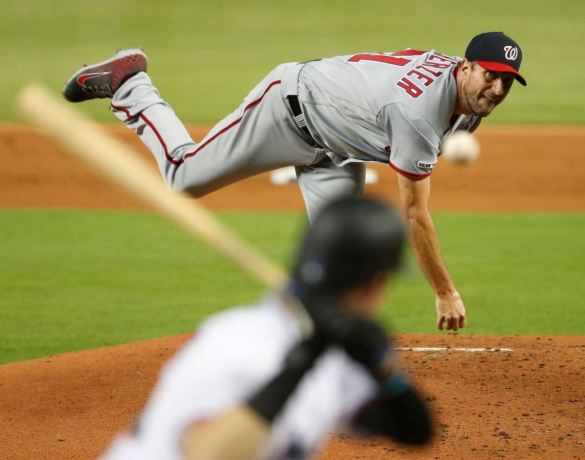 Jesse Chavez pitched into the 7th, allowing 1 unearned run, no walks and 7 strikeouts over 6 1/3 innings as the Rangers beat the Tigers, 5-3.

Rafael Devers doubled 3 times and added a single, scoring twice as the Red Sox came from behind again to beat the White Sox, 6-3.

Manny Machado returned to Baltimore by homering and reaching base 2 other times to lead the Padres to an 8-3 victory.

Max Scherzer struck out 10 Marlins in 8 innings, allowing 1 run to earn the 6-1 decision for Washington.

Hanser Alberto got 4 hits including a double but the Orioles fell to San Diego, 8-3.

Jeff McNeil went 4 for 5 with an RBI and a run score in the Met 7-5 loss to Philadelphia.

Robbie Ray struck out 9 Dodgers in 6 1/3 innings, but took the hard luck 3-2 decision for Arizona.

Clayton Richard settled down after a rough start to throw 6 innings, allowing 3 runs on 3 solo homers, walking 1 Yankee batter. But the early homers were enough to sink him and the Blue Jays, 4-3.