Yu Darvish struck out 10 White Sox in 7 innings, allowing 1 run to help the Cubs hold on to a 2-1 final.

Justin Dunn gave up 1 hit over 6 innings, striking out 6 Rangers, to earn the 4-1 decision for Seattle.

Miguel  Sano got on base 4 times, including 2 doubles, as the Twins topped the Royals, 5-4.

Dylan Cease was solid through 6 innings, holding the Cubs to 2 runs. But he took the hard luck 2-1 loss for the White Sox.

Hunter Dozier reached base 5 times, scoring 3 runs but the Royals were edged out by the Twins, 5-4.

Justin Smoak doubled and homered in the Brewers 5-4 defeat by Pittsburgh.

Luke Weaver pitched into the 6th, striking out 5 Giants but Arizona dropped the 6-1 final.

END_OF_DOCUMENT_TOKEN_TO_BE_REPLACED 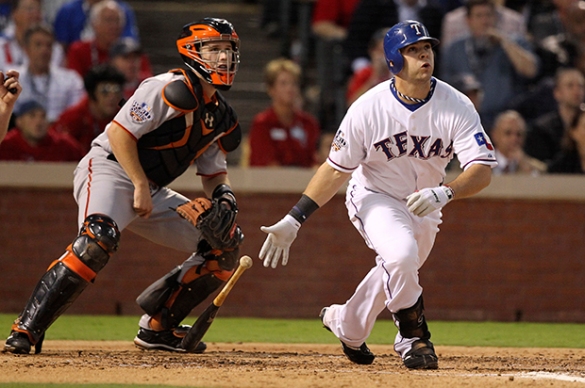 When the 2010’s began, the World Series was a match up against two franchises not known for their October magic. The Giants had not won it all since 1954, when they called New York their home. The Rangers had only won one post season GAME going into 2010.

The Giants took control of the 2010 World Series early, but it was rookie Mitch Moreland’s bat that gave the Rangers life.

Texas won 14 of 15 in June to storm into first place. And unlike a lot of previous Rangers squads, Ron Washington’s team did not fade in the Lone Star State heat. Josh Hamilton and Michael Young provided the offense and Cliff Lee was picked up in midseason to boost the rotation.

Then in October, the confronted many of their post season demons. First they ended their 9 game playoff losing streak. They eliminated a tough Tampa Bay team to advance to their first ever ALCS. There they faced their nemesis, the Yankee. 6 games later, Hamilton and company eliminated the defending World Champs and finally went to the World Series.

But the Giants took the first two games and the Rangers returned to Arlington in a hole. The Giants pitching was dominant after upsetting the Phillies. Tim Lincecum got off to a rocky start in Game 1 but settled down to win it. Matt Cain dominated Game 2.

Game 3 pitted Colby Lewis and Jonathan Sanchez. The Giants deep bullpen was rested and the Rangers knew they had to get to Sanchez early to have a shot to make the world Series competitive.

The inconsistent left hander pitched around a single in the first and retired Elvis Andrus, Josh Hamilton and Vlad Guerrero.

In the bottom of the second, the Rangers got a lead off double from Nelson Cruz but it looked like it would go to waste when Ian Kinsler and Jeff Francoeur grounded out. After a walk to Bengie Molina, the Rangers sent up their number 9 hitter, Mitch Moreland.

Moreland was a 24 year old rookie who played only 47 games for the Rangers in 2010. The only reason he was the every day first baseman was because highly touted prospect Justin Smoak was sent packing to Seattle in the Cliff Lee deal. Moreland’s solid season in minor league Oklahoma City earned him a spot. Normally first base would be the spot for a slugging veteran. But Ron Washington trusted Moreland with the job.

He rewarded his manager with a .389 average in the ALCS. He was 3 for 5 over the first two World Series games. So clearly, he was not a typical number 9 hitter.

With the count 2 and 2 and Sanchez a pitch away from getting out of another inning, Moreland fouled off pitch after pitch. On the 9th pitch of the at bat, he lined it into the right field stands. The Rangers were up 3-0.

They added a fourth run and then hung on as a Giants comeback fell short and the Rangers won 4-2.

It would be Texas’ final hour as the Giants used Madison Bumgarner, Tim Lincecum and Brian Wilson to shut down their mighty attack and take the series in 5. But with one hard fought for at bat, the Rangers had hope in the series. It was a moment lost in the end results of the series but not lost on this author.

That makes him the Unsung Post Season Hero of October 30. 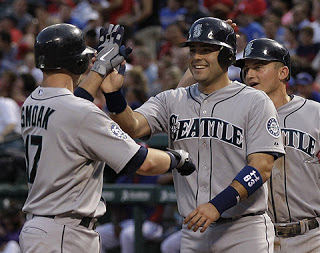 From Cliff Lee to Erik Bedard to the 2008 season to Chone Figgins, not a lot has gone as the Seattle Mariners had planned over the past few seasons.

Big prospects have disappointed, rebuilding plans have gone awry and the specter of Felix Hernandez and Ichiro Suzuki finishing their runs in Seattle without a trip to the World Series hangs over the team.

Yet last night, for one wonderful night, it all seemed to click with their young line up.
In one glorious night against the two time defending American League Champion Rangers, the young Mariners flexed their muscles and looked exactly like the team they wanted to build.

Ackley’s teammate at UNC, Kyle Seager, went 4-6 with a pair of doubles and two RBI.

22 year old Jesus Montero, the prize of the Michael Pineda deal, reached base 5 times, drove in 4 runs and launched his 7th homer.

25 year old Justin Smoak, the key of the Cliff Lee trade, collected 3 hits and a walk, crushed a pair of homers and drove in 6 runs.

It looks so easy when it is done right. If those five (plus Ichiro who sat out last night) could do that on a regular basis, the Mariners would be a contender and Felix Hernandez would win 25 games every year.

Hopefully for Mariner fans this was no fluke.