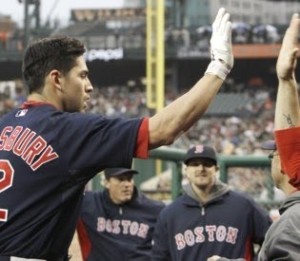 Yup.
The Red Sox who started the season 0-6 and 2-10 are in first place by themselves.

So now any combination of Red Sox wins and Yankee losses that equal 112… and the Red Sox are the 2011 American League Eastern Division Champions.

And they got there BEFORE Memorial Day. They had a disappointing first third of the season and are STILL in first place by themselves.

Ain’t no stopping us now! 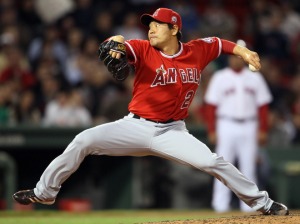 Seriously, Hisanori Takahashi was a whole lot of suck for the Angels in the first two games of their series with the Red Sox.

Aces Jeff Weaver and Dan Haren got the losses, but they actually pitched well.
Jeff Weaver went 6 innings with 3 earned runs on Monday

Dan Haren was throwing a shutout today into the 6th and finished with 7+ innings, 4 runs, 8 strikeouts and no walks.

That’s 5 earned runs in 1 1/3 innings of late relief. Two tight games that turned into blowouts. I am not even including 2 come from behind wins against two of the best pitchers in the AL on my Dodged Bullet/Teeth Grinder ledger because Takahashi made the games no brainers.

Seriously Takahashi. Pick up the tab at the bar. 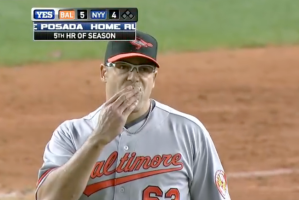 The Orioles were on the verge of a confidence building win… they beat up Phil Hughes (which will probably be a regular occurrence this season and were going to leave Yankee Stadium with a split.

They brought a one run lead into the 9th inning and Buck Showalter handed the ball to Kevin Gregg. The minute I saw that I thought “Well, the Yankees are going to tie the game.”

The Yankees won in 10, but make no mistake, this was Gregg’s game to lose.

And so now we have the fourth straight season that I have been telling people that he stinks as a closer and teams are nuts for signing him.

And the Orioles are his fourth team in as many years.
And believe me, there will be many more demoralizing losses for a young Orioles team this year. This team should not be handing the ball to Kevin Gregg. That is a recipe for devastation. That is a formula that will keep a growing team from building on positive moments like taking early leads and hitting well in the Bronx.

Nothing positive happened for them tonight.
Buck, Gregg may indeed have some talent, but handing the game to him in the 9th is a terrible Armando Benitez-esque mistake.

Throw Josh Rupe out there. Give Chris Jakubauskas a few save chances. Koji Uehara is no spring chicken. Have him come out to close games.

Call up Eddie Gamboa from AA and see what he can do.
How can it be worse than Gregg?

It is no longer a small sample size of games nor teams.

It’s a rebuilding year for the Orioles but with a break here and there they can sniff .500. But that won’t happen with Gregg giving away games, which is EXACTLY what he will be doing all season long.

Unless you think the last 4 years were a fluke!