The Padres got the best players named Yasmani, Yonder and Edinson in all of baseball.

Actually I am not sure how Mat Latos will fare in Cincinnati. But his stats dipped last year and no doubt the Padres are banking at the 24 year old Latos’s Cy Young contending season in 2010 was a fluke.

And maybe the Padres were thinking that maybe he was a PetCo Park creation.
Either way they get Yonder Alonso who was one of the top prospects in baseball before the 2009, 2010 and 2011 seasons.

They got Edinson Volquez who was an All Star in 2008 and only 28 and heading into a great pitchers ballpark.

And someone named Brad Boxberger was sent to San Diego.
He’s a 24 year old reliever who can strike batters out.
He struck out 93 batters in 62 innings last year. He had 6 2/3 strikeouts for every walk thrown.

I’m telling you. I said it once and I’ll say it again.

The Padres have a plan.
I have so much more confidence in the Padres than many other high profile teams.

And you’ll hear names like Boxberger and Yonder and Edinson and Yasmani will be in October before a lot of better known names.

But I think I am right about this.
I think the San Diego Padres will be in a position to be in the World Series BEFORE big market teams like the Red Sox, Cubs or Mets.

Yeah yeah yeah, I know. The Padres were a whole lot of suck last year. And I know their penny pinching ways aren’t going to end in 2012.

And their chances of winning in 2012 are slim to none.
You know… like the Diamondbacks’ chances were in 2011.

I know the Padres will be in full “Let’s see what we’ve got in the minor leagues” mode in 2012 and the mantra will be “Patience while we give some talented players some experience.”

But guess what? That’s a better place than the Red Sox, Cubs or Mets will be in for 2012.

The 2012 Red Sox will still be reeling from a September that took them from a potential World Series to the scorched Earth purging of the front office and management. Nobody even knows who is running the show.

The 2012 Cubs have a nice story with the arrival of Theo Epstein. But when he took over the Red Sox after the 2002 season, they had just won 93 games and were a contender until the last week of the season. This Cubs team is a 91 loss mess with the Soriano and Zambrano contracts making it damn near impossible to make any major moves this season.

And those two teams are locks for the playoffs compared to the Amazing Messed Up Mets. They have unmovable contracts, injured stars, their marquee player (Jose Reyes) is a free agent and who knows what their financial situation is. Will they be sold? Will MLB focus on the Mets after the Dodger debacle is cleared?

The Padres are in a much better place. They KNOW what they are doing. They are playing young prospects and have a low payroll.

Heath Bell could leave via free agency and give them even more payroll flexibility and draft picks. Or he could stick around and anchor the bullpen and give the young pitchers some built up confidence.

Mat Latos had a step back season but still wasn’t bad. And he will only be 24 next season. Clayton Richards, Cory Luebke, Josh Spence and Ernesto Frieri are all young and pitching in one of the best pitchers parks in the league.

Um… that is potentially a staff 6 pitchers deep.
Can the Red Sox, Cubs or Mets say that? Honestly?

Plus they have young Robert Erlin, Anthony Bass, Joe Weiland and Casey Kelly not far away.

They have the likes of Cameron Maybin and Kyle Blanks who seem to have been around forever but they are both still only 25 years old.

They have the young Anthony Rizzo who has already made his big league debut. So did another minor league stud, James Darnell. Third baseman Jedd Gyorko is working his way up the system.

Mix that all in with the fact that they play in a totally unpredictable division.

Between 2005 and about 2 weeks to go in the 2007 season, it looked like the Padres had control of the NL West.

Oh wait! The Diamondbacks won the 2007 Division title and about midway through the 2008 season it looked like it was theirs for a while.

Except that the Giants won it all in 2010. And their repeat in the NL West was preordained…

But nobody told the Diamondbacks who suddenly became the Division standard bearers again.

Throw in a pennant and a Wild Card in Colorado and this Division is anyones.
Teams turn around, flame out and turn around again quickly in the NL West.

And the Padres would have almost all of the names I mentioned controlled for a few years and be allowed to gel and have a few reasonable additions to the payroll. By 2013 or 2014 they will have a legit shot at the playoffs.

As we saw by the last few Octobers, a team can make it to the World Series if they get on a roll.

The Padres have a DIRECTION.
Can you honestly say that about the Red Sox? The Cubs? The Mets?

This Christmas, some baseball fans should already be pessimistic about their teams chances in 2011.

The Pirates are obviously not going to be good and their losing season streak will no doubt reach a shameful 19. The Royals waved the white flag with the Greinke trade. The Mets and Cubs are a year away from a massive relief of bad contracts expiring. The Diamondbacks should have another year wandering in the desert. And the Nationals will probably stink again even though they seem to think they are on the verge of contending.

You would think that I would throw the Padres onto the scrap heap of hopeless teams, especially after dealing Adrian Gonzalez and inevitably sending Heath Bell packing before Opening Day.

But I can’t. I think there are too many reasons to be optimistic in PetCo Park, and I don’t just mean the ability to get a decent seat.

First of all, they are still LOADED with pitching talent. Mat Latos looks like he will be an All Star for a while. Clayton Richard looks like a steal from the White Sox. And even though Jon Garland has skedaddled and taken his 200 innings with him, there are other options. Aaron Harang has come to town and while he has been kind of lousy the last few years, he is moving from the hitters haven of Great America Ballpark to the pitcher paradise of PetCo Park.

Also Tim Stauffer, Cory Luebke or even young Simon Castro could step in and fill out the back of the rotation.

And their 2010 bullpen was a never ending parade of effective arms. Whenever I saw the Padres play (and as a West Coast resident I saw them A LOT) they always pulled out some reliever that I hadn’t heard of before but had some sickeningly good numbers.

Seriously, besides the biggest baseball fans or residents of the Gaslamp District, who the hell heard of Ernesto Frieri, Luke Gregerson, Edward Mujica, Joe Thatcher or Ryan Webb? If Heath Bell is dealt, ONE of those guys could step in and pitch the 9th.

And if Bell is dealt, Padres GM Jed Hoyer seems to be pretty good at actually getting useful players in return. Clayton Richard came over in a deal for a broken down Jake Peavy. Casey Kelly, brought over in the Adrian Gonzalez trade, could be in the pitching staff this year. Gonzalez also yielded Anthony Rizzo who could fill in at first base and Raymond Fuentes who could be in the outfield by 2012.

Take note Pittsburgh. Just because you trade expensive players doesn’t mean you have to dump them for no value in return.

And I think some of the moves they have made have made the team better. Jason Bartlett and Orlando Hudson are a terrific middle of the infield and should be an improvement defensively. And Brad Hawpe is just a season removed from being an All Star. The Padres don’t need All Star production from him… just hit well enough to not have first base be a hole.

And in the light of what happened in 2010, many of the young Padres experienced meaningful games in what was supposed to be a rebuilding season. If they went 2-8 between August 26th and September 5th instead of 0-10, they would have been playing in the playoffs. As it were, they won 90 games and lost the Division to the eventual World Champions.

And the Giants will inevitably take a slight step back in the wake of their World Series title, the Diamondbacks are rebuilding, the Dodgers are a mess and who knows what will happen in Colorado. The NL West isn’t the AL East with super powers gobbling up super stars.

And what else did the Giants championship teach us? With a good pitching staff, you don’t need to be an offensive powerhouse to win. The Giants upgraded their offense from “A FEMA level disaster” to merely “terrible” and look where they ended up.

If Bell could fill in a hole or two in the line up and the young pitching takes advantage of the ballpark and the improved defense, they could have a winning season. And in the NL West, a winning season could mean contention in September.

And what else can you ask for in September than meaningful games. So be optimistic this Christmas morning, Padres fan. You may not have the sexiest team, but you do have reason to look forward to 2011.

Go ahead and have images of National League West titles dancing in your head. 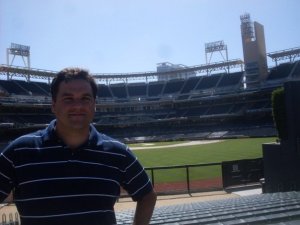